The nonwoven geotextiles market size in Europe, Middle East, and Africa, and Asia Pacific was estimated at USD 4.12 billion in 2017 and is expected to register a CAGR of 6.7% over the forecast period. Government policies for the use of geotextiles in infrastructural development of inaccessible hilly areas, in emerging economies such as China and India, is likely to drive product demand. In addition, favorable regulations pertaining to the use of geotextiles for erosion prevention can complement the growth. Furthermore, technological developments regarding Geosynthetic Reinforced Walls (GRS) are anticipated to drive product demand. 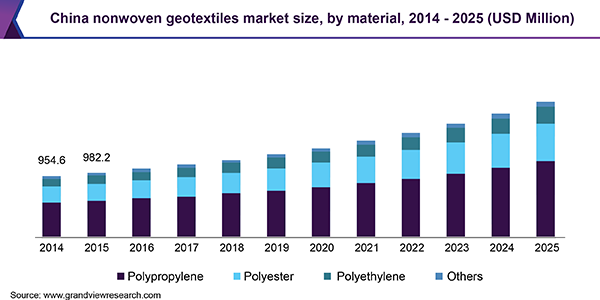 Increasing demand for nonwoven geotextiles is attributed to their properties including separation, filtration, reinforcement, drainage, and protection of soil. Substances and particles present in soil vary in size and may lead to one undesired mixture due to the mechanical stress and wear and tear. Nonwoven geotextiles aid in the separation of these materials, thereby enabling passage of water while retaining the soil particles. This process is utilized during the construction of roads, pavements, and fields. The product can enhance safety in terms of the lifespan of roads, dams, and embankments, which in turn is also expected to drive the demand.

The rise in the construction of roadways and drainage systems in Asian countries, such as China, India, and Japan is expected to boost market growth over the forecast period. In addition, rising awareness regarding soil erosion leading to environmental problems such as deforestation and the greenhouse effect is projected to enhance product demand in the forthcoming years.

Volatility in crude oil prices is expected to be a significant challenge for manufacturers as the key raw materials, such as polypropylene, polyester, and polyamides, are crude oil derivatives. However, increasing focus on the development of eco-friendly and sustainable geotextiles is projected to propel the demand for jute and coir as raw materials.

The high strength of polyester boosts its application in geotextile landscaping for erosion control and filtration. In addition, ultraviolet radiation resistance properties of the material bode well for the demand, since geotextiles have major installations outdoors.

Polyethylene (PE) is expected to witness growth owing to beneficial properties of PE including thermal and UV resistance. In addition, PE geotextiles are available in different grades, such as HDPE and LDPE, making them suitable for various applications due to different compositions and properties. Lower prices compared to its counterparts is likely to have a positive impact on demand over the forecast period.

The high heat resistance of polyethylene fibers is likely to fuel their demand in high heat applications for the construction industry. The penetration of polymer, on the other hand, is low owing to its low tensile strength and recyclability as compared to polypropylene.

Polypropylene nonwoven geotextiles find extensive applications in the construction industry; especially for roofing, tile underlayment, pipelines wrapping, acoustical ceiling, and overall insulation. The product is also used in agriculture and landscaping in root bags, capillary matting, turf protection, weed control fabrics, crop, and other types of covers. As a result, the segment is expected to register a CAGR of 6.9% over the forecast period.

Geotextiles prevent soil erosion by engaging a net or mat-like structure. This boosts germination in the area and enables vegetation, leading to the growth of a stable top layer owing to a strong and deep root system. In addition, attributes such as high soil retention, easy installation, and cost-effectiveness are expected to drive the product demand in numerous applications including the construction of roads, railway cuts and fills, irrigation canals, and motorways. The market growth can be attributed to the increasing need to protect riverbeds from corrosion and to control infrastructural damage caused by erosion of shorelines. The product is gaining popularity as it can protect soil erosion caused by wind and water. 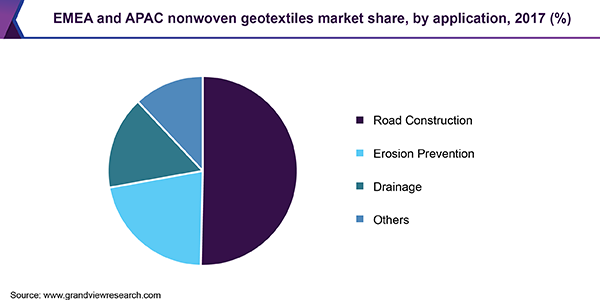 Geotextiles are largely used to control erosion, as they reinforce soil and promote vegetation. They are also used in maintenance applications, which is likely to drive the demand over the forecast period. In addition, the product is used for erosion control in lakes and stream banks, thereby augmenting the demand. The nonwovens find application in the maintenance and repair of roadways, waterways, and landfills as they aid in reducing clogging by separating sediments and soil from water. This is projected to drive the demand from the civil engineering industry, especially the drainage application.

Drainages play an important role in infrastructure development. Infrastructural growth in China has led to increased use of geotextile in drainage systems. Geotextiles are becoming an integral part of modern infrastructural development owing to numerous advantages, this in turn is expected to impact the product demand positively over the forecast period.

In Italy, the drainage application segment is expected to witness a CAGR of 6.5% over the forecast period owing to application in trench drains as perforated pipes wrapping. In addition, the product is used for protection from soil erosion, separating the base course and sub-base of the roads during road construction, and combining it with 3D structures for creating prefabricated drains.

Middle East and Africa are anticipated to showcase significant growth over the forecast period owing to abundant availability at a low cost. The product is used in road construction to provide a tensile strength in the earth mass, which aids in increased water permeability of constructed roads.

Reduced rate of inflation in Asia Pacific has resulted in the decline of commodity prices and the growth of local currencies. Increased foreign investments in emerging economies, such as China and India is anticipated to have a positive impact on regional economic growth. Furthermore, rising megacities in China and India coupled with rapid infrastructure development in the region is expected to propel product demand in the near future.

The market is highly fragmented on the global level, while it is consolidated at the regional level. The local markets are dominated by the presence of a large number of similar-sized players, resulting in an oligopolistic market, characterized by consistently similar pricing strategies.

This report forecasts revenue growth at global, regional, and country levels and provides an analysis of the latest industry trends in each of the sub-segments from 2014 to 2025. For the purpose of this study, Grand View Research has segmented the Europe, Middle East, and Africa and Asia Pacific nonwoven geotextiles market report on the basis of material, application, and region:

How big is the nonwoven geotextiles market?

b. The global nonwoven geotextiles market size was estimated at USD 5.3 billion in 2019 and is expected to reach USD 5.8 billion in 2020.

What is the nonwoven geotextiles market growth?

Which segment accounted for the largest nonwoven geotextiles market share?

Who are the key players in nonwoven geotextiles market?

What are the factors driving the nonwoven geotextiles market?

b. Key factors driving the nonwoven geotextiles market growth include government policies for the use of geotextiles in infrastructural development of inaccessible hilly areas, in emerging economies such as China and India.