The global geotextiles market size was estimated at USD 4.6 billion in 2019 and is projected to register a CAGR of 11.9% over the forecast period. Increased usage of geotextiles in a wide range of construction applications such as roads, landfills, drainage structures, and harbors to enhance soil stabilization is anticipated to drive the market growth over the forecast period.

The extended lifespan and cost-effectiveness of geotextiles, coupled with growing environmental concerns regarding soil erosion, are projected to drive the demand for geotextiles. Promotional policies and initiatives by regulatory bodies have helped increase awareness regarding the benefits of geotextiles, thereby positively impacting market growth. 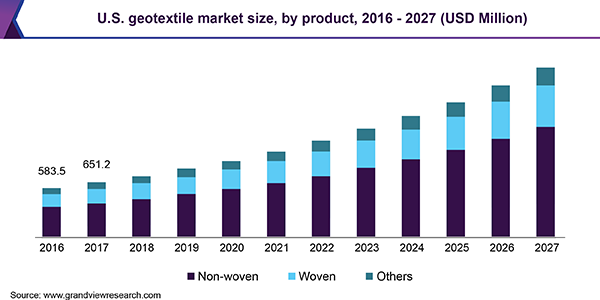 Geotextiles are widely used in U.S. to control erosion caused by rivers and other water bodies in mountainous areas. Geotextiles aid in the restoration of landmasses affected by storms and hurricanes such as Katrina and Isaac. The increased adoption of the product owing to the aforementioned factors is likely to drive the market growth in the country.

Woven geotextiles are manufactured from individual threads including fibrillated yarns, monofilaments, or slit films that are woven together to provide high load capacity for road construction applications. The long lifespan of these fabrics, coupled with resistance to corrosion, drives its use for long-term applications.

In European economies such as Germany and U.K., manufacturers are required to comply with the stringent regulations established by governing bodies, which state the specific characteristics of the types of geotextiles and the applications they are most suitable for. The favorable regulatory framework for the application of these products, especially in erosion prevention applications, is likely to drive the market growth.

China has witnessed rapid economic growth over the past few decades, resulting in high investments in the construction sector. The ample availability of usable land is expected to increase infrastructural activities in the country. The Chinese government has made considerable investments in infrastructure projects, which would subsequently drive the demand for geotextiles in the country.

Nonwoven geotextiles dominated the geotextile market in 2019 on account of their high adoption in a wide range of applications such as construction, furniture, hygiene products, automobiles, medical products, agriculture, and packaging. The non-woven segment is expected to register a significant revenue-based CAGR of 12.2% over the forecast period.

Woven geotextiles are anticipated to witness a CAGR of over 11.0% from 2020 to 2027 in terms of revenue. Increasing product penetration in erosion prevention applications owing to their favorable characteristics such as excellent filtration and high tensile strength is expected to fuel their demand over the forecast period.

Polypropylene geotextiles was the largest product segment in terms of revenue in 2019 as these geotextiles have excellent resistance against chemicals and inorganic salts. The rising demand for polypropylene from emerging economies in the Asia Pacific, primarily China, is anticipated to impact the raw material price trends over the forecast period.

Polyethylene is manufactured in a crystalline form, which is crucial for the formation of polymer fibers as it defines the thickness of the textiles. High heat resistance offered by polyethylene fibers is likely to fuel their demand in the construction industry in areas with high heat applications. Low penetration of polyethylene in the geotextiles industry can be attributed to low tensile strength and recyclability as compared to polypropylene. The demand for high-density polyethylene (HDPE) in a wide range of industrial applications reduces its availability as fiber for the textile industry, thereby impacting industry trends.

The major applications of geotextiles include road construction, erosion prevention, and drainage systems. The drainage application segment is anticipated to register a CAGR of 12.5% in terms of revenue over the forecast period. When geotextiles function as a drain, they act as a channel for the movement of liquid or gases.

Non-woven geotextiles are increasingly being employed in the construction of roads, drainages, and for the prevention of erosion on account of their function to provide an avenue for water flow. Furthermore, increasing product demand for infrastructure developments including roadways, railways, and bridges is expected to drive the market over the forecast period. 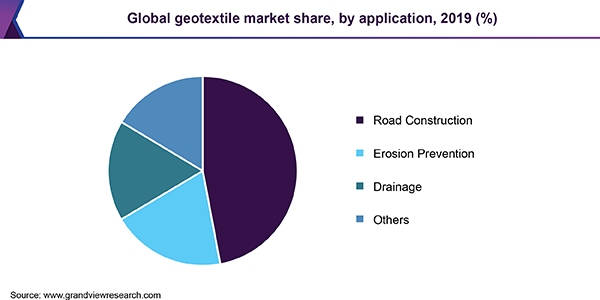 Geotextiles help prevent soil erosion as they are used for reinforcing soil. The product helps hold soil particles together and promote vegetation growth, which reduces erosion in the long run. In addition, clogging due to the washing away of soil is one of the major problems in drainage systems. The use of geotextiles in drainage systems helps create a channel for the consistent flow of water. These products are widely used in drainage systems such as dumps along with other geosynthetic products such as geomembranes.

The drainage systems in U.S. and Canada are extensive and are highly developed. High utilization of these drainage systems has resulted in the need for constant maintenance. The unique characteristics offered by the product which aids in prolonging the life of the materials used in drainage systems is anticipated to drive the market growth.

In the Middle East and Africa, geotextiles are widely used in road construction to increase tensile strength in the earth mass, which aids in improved water permeability of constructed infrastructures. Increasing product demand for improving groundwater level and reducing the risk of road damage is expected to drive the market growth.

Increasing foreign investments in the industrial sector of Asian economies such as China, India, Thailand, and Indonesia are expected to impact the market positively. Furthermore, increasing megacities in China and India, coupled with robust infrastructure development, is expected to drive the product demand over the forecast period.

Major players in the market are entering into agreements with emerging and small-scale players to expand their distribution capacities and increase the market reach of their products. Furthermore, manufacturers are focusing on other efficient and effective distribution channels. As a result, companies are likely to establish partnerships with e-commerce portals to ensure that buyers have timely access to such products.

This report forecasts volume and revenue growth at global, regional, and country levels and provides an analysis of latest industry trends in each of the sub-segments from 2016 to 2027. For the purpose of this study, Grand View Research has segmented the global geotextile market report on the basis of product, material, application, and region: