The North America electric vehicles market size to be valued at USD 147.60 billion by 2028 and is expected to grow at a compound annual growth rate (CAGR) of 37.2% during the forecast period. Favorable government initiatives, subsidies, and tax rebate programs to promote EV adoption will drive market growth. Additionally, several advantages of electric vehicles over conventional vehicles in terms of cost will also favor market growth over the forecast period. A decline in battery pack prices is also another factor expected to create significant growth opportunities for players operating in the market. According to a research paper published by the international council on clean transportation, battery pack prices in the U.S. are expected to drop from USD 11,500 in 2018 to USD 8,000 in 2025. 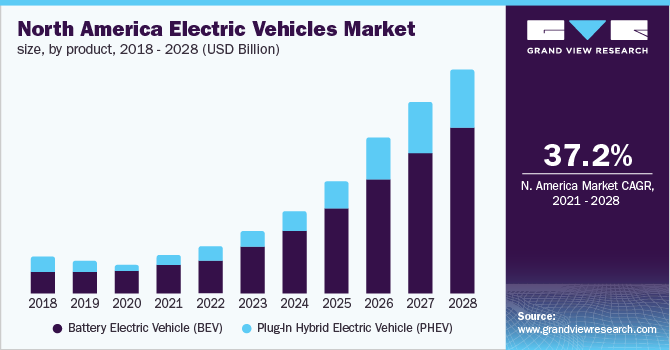 The COVID-19 pandemic negatively impacted the North America EVs market growth in 2020. The electric passenger car and light truck sales in the U.S. totaled over 200K units in 2020, which was significantly lesser than units recorded in 2019, thus registering a year-on-year decline of over 5% primarily due to the pandemic. According to the data published by Electric Mobility Canada (EMC), the electric vehicle sales in Canada witnessed a decline in the second quarter of 2020, with only over 8,000 units sold between April and June. The results represent a drop of over 50% from the units sold during the same period in 2019. However, the overall sales of electric passenger cars and light trucks in Canada remained the same in 2020 compared to 2019.

The market has grown as a result of increased attention toward sustainable development and greater awareness of the negative consequences of using traditional automobiles. Furthermore, local authorities from several regions are providing subsidies to encourage the sale of electric vehicles in anticipation for overall infrastructural development.

The increased investments from public and private entities for electric charging infrastructure like Tesla supercharger, Volkswagen Electrify America, etc., and increasing the number of electric charging stations across the U.S. is helping create trust in customers and help in mitigating the problem of range anxiety (range anxiety is the fear of driving an electric vehicle and running out of power, without being able to find a charging station on time to replenish the battery) amongst the new drivers of electric cars.

The Government of United States has set a net-zero greenhouse gas emission target for 2050, aligned with significant impacts and enforced rigorous standards of CO2 emission limits for motorized vehicles. This acts as a driver for the market as automobile manufacturing companies are compelled to adopt, develop and sell electric vehicles in the future.

Electric Vehicles (EVs) are more expensive and require a larger investment than Internal Combustion Engines (ICEs). The cost difference between an electric automobile and a comparable internal combustion engine vehicle is as much as three to four times, making EVs a less tempting option for the average customer. This large gap in EV upfront prices is due to the factors such as high research and development costs involved in battery production, a fragile raw material supply chain, and insufficient economies of scale.

The cost of a lithium-ion cell is predicted to reduce to USD 100 per kWh by 2021, according to General Motors Company (US). Manufacturing on a big scale, falling component prices, and the use of sophisticated technologies to increase the battery capacity are just a few of the factors driving down the prices. A lower price of the lithium-ion cell makes the electric vehicle cheap when compared to current prices and this make them more affordable to customers. The reduction in the cost of production of lithium-ion batteries will create a great opportunity for the larger adoption of these vehicles in the forecast period.

Based on product, the market has been segmented into Battery Electric Vehicles (BEV) and Plug-in Hybrid Electric Vehicles (PHEV). The BEV segment accounted for the largest revenue share of over 75% in 2020 and is expected to maintain its dominance from 2021 to 2028. The high revenue share is mainly attributable to the increasing environmental awareness and benefits of BEV among end users. Additionally, the average driving range of BEVs has been steadily increasing. The average range of BEVs was about 350 km in 2020, up from 200 km in 2015.

Meanwhile, the PHEV segment is estimated to expand at the highest CAGR of over 40% in terms of revenue from 2021 to 2028. This upsurge can be attributed to the initiatives taken by the U.S. and Canadian governments to promote the use of EVs. PHEVs are generally offered in larger vehicle segments such as electric trucks and buses. The growing transportation and logistics industry is expected to witness segmental growth over the forecast period. Moreover, companies such as Volkswagen Group are focusing on increasing their plug-in electric car sales. In January 2020, the company announced an increase of about 60.0% in its plug-in electric car sales compared to 2018.

Based on vehicle type, the market has been segmented into Passenger Cars and Light Trucks (PCLT), and commercial vehicles. The PCLT segment accounted for a dominant revenue share exceeding 85% in 2020 and is anticipated to continue its dominance over the forecast period. The PCLT segment includes passenger cars and light trucks. The light trucks segment is estimated to expand at a CAGR exceeding 35% from 2021 to 2028 as SUVs offer advanced features, affordability, comfort, and durability, among other advantages. Moreover, several prominent manufacturers are focused on launching electric vehicles in the light truck segment. BMW iX, Tesla Cybertruck, Audi Q4 e-tron, and GMC Hummer, among others are some of the light trucks that will be available in the market in the coming years. 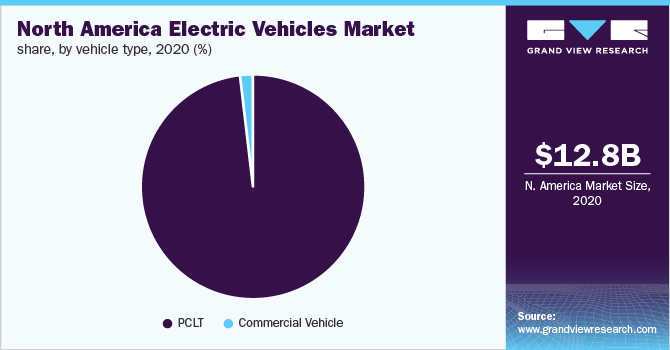 The commercial vehicle segment is estimated to expand at a CAGR exceeding 45% in terms of revenue over the forecast period. Increasing demand in the logistics sector, incentives for adopting zero-emission vehicles, and reducing the fuel and maintenance costs are some of the factors driving the segment growth. Moreover, stringent emission norms imposed on commercial vehicles are expected to propel manufacturers to invest in electric truck manufacturing.

The U.S. accounted for the largest revenue share of over 70% in 2020 and is anticipated to continue its dominance over the forecast period. The increasing demand from the logistics sector is expected to lead to regional growth. Besides, in June 2020, the California Air Resources Board has set electric truck sales targets for manufacturers beginning in 2024. The rule is expected to bring around 0.3 million electric trucks to California’s roads by 2035. The electric vehicle sales in the U.S. had declined in 2019 and 2020 as the federal tax credit was decreased for General Motors Company and Tesla.

Canada is projected to expand at the highest CAGR exceeding 40% in terms of revenue from 2021 to 2028. The government in the country is investing significantly to promote adoption. The province of Ontario and the federal government each provided USD 220 million to Ford Motor Company to support EV production. Besides, the government will also provide USD 2 billion over the next few years to electrify school and transit buses across the country.

The market is highly competitive with the presence of several global as well as regional players. In 2020, the market was dominated by Tesla, General Motors Company, Toyota Motor Corporation, Nissan Motor Company, and Volkswagen AG. Organic growth remains the key strategy for the overall industry, focusing on product launches to expand product offerings and meet consumer demands. For example, in September 2020, Volkswagen AG announced the launch of ID.4, a fully electric driven SUV generating zero local emission. The company has planned to launch the car in the compact SUV segment.

Market players also focus on joint ventures and partnerships to increase the adoption of electric vehicles. For instance, in July 2020, General Motors partnered with EVgo to accelerate widespread adoption in the U.S. The companies planned to add over 2,700 new fast chargers to expand the public fast-charging network over the next few years.

Some of the prominent players operating in the North America electric vehicles market are:

This report forecasts volume and revenue growth at regional and country levels and provides an analysis of the latest industry trends in each of the sub-segments from 2016 to 2028. For this study, Grand View Research has segmented the North America electric vehicles market report based on product, vehicle type, and region: 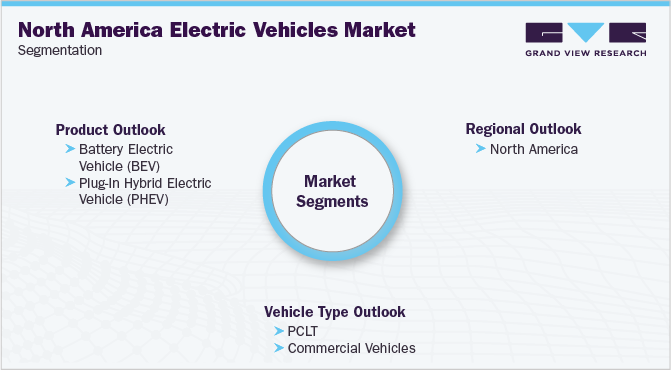 How big is the North America electric vehicles market?

What is the North America electric vehicles market growth?

b. The U.S. accounted for the largest revenue share of over 70% in 2020 and is anticipated to continue its dominance over the forecast period in the North America EVs market.

Who are the key players in the North America electric vehicles market?

What are the factors driving the North America electric vehicles market?

b. Key factors that are driving the North America EVs market growth include favorable government initiatives, subsidies, and tax rebate programs to promote EV adoption coupled with several advantages of EVs over conventional vehicles in terms of cost.

b. The BEV segment accounted for the largest revenue share of over 75% in 2020 and is expected to maintain its dominance from 2021 to 2028 in the North America EVs market.

b. The PCLT segment accounted for a dominant revenue share exceeding 85% in 2020 and is anticipated to continue its dominance over the forecast period in the North America EVs market.