The North America PVC films market size was valued at USD 2.3 billion in 2019 and is expected to expand at a compound annual growth rate (CAGR) of 2.6% from 2020 to 2027. Increasing demand from the packaging and medical industries is expected to be a major factor driving the demand for Polyvinyl Chloride (PVC) films over the forecast period. However, the outbreak of the COVID-19 pandemic is expected to impact the demand for PVC films in North America. Factors that make the North America PVC films market opportunistic include the unlimited range of applications of PVC films from packaging to building and construction and the capability of the producers to produce continuously and meet the industry challenges. The adoption of PVC films as a cost-effective packaging solution has further increased the attractiveness of the market. 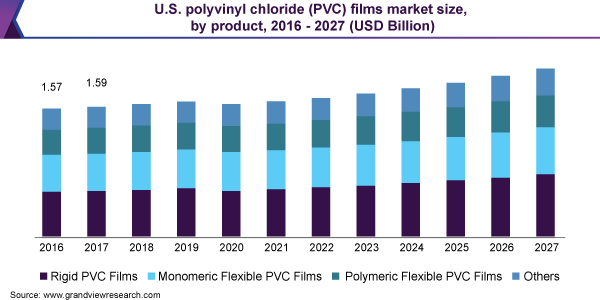 The most prominent challenge to the market is the growing concerns among end-users regarding sustainable production and the adoption of more environment-friendly packaging options. Packaging, the largest application segment of the market, is likely to be the worst hit on account of reduced demand, following the COVID-19 pandemic situation. Several end users are phasing out PVC films from their packaging options and opting for their alternatives.

The COVID-19 pandemic has caused severe repercussions across North America, such as the economic decline, supply chain disruptions, manufacturing halts, and industrial shutdowns. Such disease outbreaks are likely to challenge the market at a macroeconomic level. The real GDP in North America in 2020 contracted by -32.9%, -38.7%, and -17.3% annualized rates in the U.S., Canada, and Mexico, respectively.

The calendering technology segment led the market and accounted for more than 55.0% share of the regional revenue in 2019. This is attributed to the rising demand for developing film and sheet products with distinct qualities. The process enables the use of various specialty surface treatments of the film or sheet, including embossing, enhancing the physical properties, and in-line lamination. The calendared material exhibits product uniformity, higher tensile properties, and unusually close gauge control when compared with extruded films.

The use of calendering technology allows cost-effective production as well as generates high yield output, ultimately leading to the development of economically feasible products. However, the process does not prove to be economically viable when used in short-run production, which proves to be a major restraint for segment growth.

The extrusion process involves the conversion of raw and mixed plastic compounds into molten form passing through a heated barrel with the help of a spiral-shaped screw. The extrusion process offers various advantages, such as excellent dimensional stability in both extrusion and cross-web directions, along with improved flat laying qualities and fast changes of extrusion shapes useful for smaller production quantities.

The rigid PVC films product segment led the market and accounted for more than 55.0% share of the regional revenue in 2019. This is attributed to rising demand in the packaging, adhesive tapes, and decorative industries. Commercially, rigid PVC films are sold in various grades depending upon the end-use industry. Various applications include printing, stationery, and freezer.

Rigid PVC films offer properties, such as excellent thermostability and high clarity, and are available in a wide range of thicknesses. The films are easy to use, affordable, and highly adaptable. Rigid PVC films are highly transparent, which makes them suitable for use in construction materials, such as transparent partitions for clean rooms, corrugated panels, and industrial flat plates.

Monomeric films consist of short-chain plasticizers. The short chains do not bind very well into the film and tend to drift out of the film, thereby making it brittle. Commercially, these films are sold in various thicknesses ranging from 3 to 4 Mils (70 to 80 micron) as well as in matt and gloss finishes. The price of these films is low as compared to polymeric flexible PVC films.

The food industry accounts for a significant share in the packaging market worldwide. The demand for PVC film-based packaging was high for ready-to-eat food products, which include cereals, fresh meat products, smoked fish, desserts, sandwiches, and cheese. Rapid urbanization, increased demand from consumers working from home in this pandemic, and the quickening pace of life have augmented the demand for packaged food, which, in turn, are expected to have a positive impact on the segment growth. 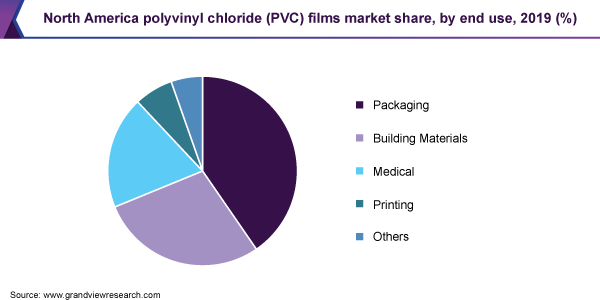 PVC films are used in several building materials, including flooring, pipes, and coverings. The effectiveness of PVC over the traditional materials, such as copper, iron, or wood, for making pipes has made it a popular choice among the pipe manufacturers. Furthermore, flexible PVC flooring is inexpensive and is used in a variety of buildings, including home, offices, schools, hospitals, and other institutional buildings.

In medical applications, PVC films are used for the packaging of medicines and drugs and the storage of medicines owing to their highly effective chemical resistance properties. In addition, they are also used in the production of fluid bags, transdermal patches, wound-care products, and disposable surgical gowns. In medical packaging, the films are specifically used in blister packaging owing to their high flexural strength, excellent thermoform ability, good chemical resistance, and low permeability to oils.

The printing segment includes digital, offset, and screen printing. PVC films are used in printing applications for signs, indoor banners, tags, labels, calendars, maps, charts, cards, and menus among others. PVC exhibits UV resistance and thermostability, along with superior orientation and excellent ink receptibility. As a result, PVC is gaining prominence in the printing industry.

The U.S. dominated the market and accounted for more than 70.0% share of the regional revenue in 2019. The market is primarily driven by the rising demand for PVC films in the medical applications for manufacturing capsules, tablets, drainage bags, and other medical equipment. The demand for plastics in various applications, including packaging, construction, electrical and electronics, automotive, agriculture, and consumer goods, is expected to grow after the current pandemic ends. The U.S. PVC films market is expected to witness slow growth as there is limited cross-border trade between the countries on account of the COVID-19 pandemic.

The building and construction end-use industry in Canada is creating positive growth opportunities. Low cost associated with setting up a manufacturing facility and the availability of low-cost labor compared to that of the U.S. is grabbing the attention of the manufacturers to set up their manufacturing plants in Canada. Additionally, the government of Canada is investing in infrastructure development projects, which is anticipated to propel the growth of the construction industry and drive the demand for PVC films over the forecast period.

According to The International Trade Administration, in 2019, the packaging material production industry represented 1.7% of Mexico’s GDP, 8.5% of manufacturing GDP, and 5.8% of the industrial sector GDP. In terms of volume, in 2019, Mexico produced 12.8 million kilotons of packaging materials and containers worth of USD 16 billion. The packaging industry is one of the major contributing industries in Mexico, which is expected to drive the demand for PVC films in retail packaging, food, and beverage packaging, and consumer goods packaging over the forecast period.

The majority of the players engaged in the manufacturing of PVC films compete on the basis of new application development and technologies used for manufacturing. Established players of other regions, such as Alfatherm SpA, are investing in expanding production capacity to increase and enhance their product offerings to gain a competitive edge over other players in the North American market. For instance, in September 2017, Alfatherm SpA, based in Venegono, Italy, which is one of Europe’s major producers of rigid, semi-rigid, and plasticized furniture PVC foils, announced the formation of Alfatherm North America Inc.

However, the outbreak of COVID-19, especially in the U.S. and Canada, has largely hampered the market growth owing to the lockdown imposed by various governments to contain the spread of the pandemic. Moreover, disruption across the value chain, cancellation of orders, shortage of workforce and raw materials, and rapidly waning demand from the application industries have altered the production capacity of the players in the market. Some of the prominent players in the North America PVC films market include:

This report forecasts revenue and volume growth at the regional and country levels and provides an analysis of the latest industry trends and opportunities in each of the sub-segments from 2016 to 2027. For the purpose of this study, Grand View Research has segmented the North America PVC films market report on the basis of technology, product, end-use, and country:

How big is the North America polyvinyl chloride films market?

What is the North America polyvinyl chloride films market growth?

b. U.S. dominated the North America PVC films market with a share of 71.1% in 2019. This is attributable to the rising demand for PVC films in a medical application for manufacturing capsules, tablets, drainage bags, and other medical equipment.

Who are the key players in the North America polyvinyl chloride films market?

b. Some of the key players operating in the North America PVC films market include Pactiv LLC, Tekra, LLC, Presco, Teknor Apex, and Achilles USA, Inc.

What are the factors driving the North America polyvinyl chloride films market?

b. Key factors driving the North America PVC films market growth include increasing demand from the packaging and medical industry and growth in the building & construction industry coupled with favorable regulations related to the use of the sustainable plastic product.