The North America sodium bicarbonate market size was estimated at USD 388.4 million in 2017, expanding at an estimated CAGR of 1.8% from 2018 to 2025. The market is anticipated to be driven by growing demand from end-use industries such as animal feed, food, chemicals, pharmaceuticals, and water treatment. Moreover, strong government support for R&D to increase the application scope is an important factor that is expected to propel the market.

In recent years, the market has witnessed a steady growth rate in North America owing to large-scale demand generated from applications such as food (mostly used as a leavening agent) and animal feed (as the ruminal pH buffer). As of 2017, these two applications accounted for a share of more than 50.0% in the total North America market. 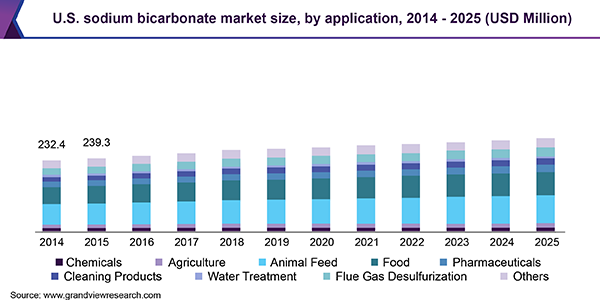 Commonly called baking soda, it is mainly obtained from soda ash, both in synthetic and natural form. However, raw material required for baking soda is produced from natural soda ash in North America. According to the US Geological Survey, currently, U.S. has the most abundant natural soda ash reserves, located at Green River Basin, Wyoming.

Product prices in the market largely depend on production of soda ash. According to the USGS, soda ash prices have increased in the recent past. Animal feed and food are the two primary applications generating considerable demand for sodium bicarbonate in U.S., Canada, and Mexico. The growing animal feed industry in the region is likely to further spur product demand in the coming years. Other sectors, such as flue gas desulfurization, cleaning products, and pharmaceuticals are also projected to contribute to the market to a significant extent.

By application, the market has been segmented into chemicals, agriculture, animal feed, food, pharmaceuticals, cleaning products, water treatment, flue gas desulfurization, and others. In 2017, animal feed emerged as the largest and fastest growing segment and accounted for a market share of approximately 27.32%, closely followed by the food application segment.

Sodium bicarbonate is used for purifying, processing, and synthesizing polymers and chemicals. Increasing product consumption in chemical production, owing to its alkaline nature and favorable reactivity properties, is projected to be a significant factor driving the North America sodium bicarbonate market over the forecast period. 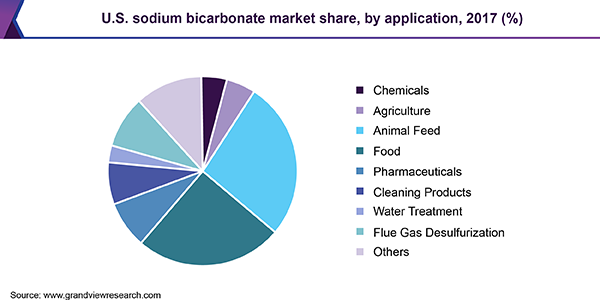 Feed grade sodium bicarbonate is also widely used as a dairy cow feed supplement. Owing to its buffering capabilities and palatability, it helps reduce acidic conditions and stabilize rumen pH. Its increasing application in animal feed, along with growing awareness regarding its benefits, is expected to drive the market over the forecast period.

Sodium bicarbonate is also widely used as an active pharmaceutical ingredient (API) in the pharmaceutical industry. It is used for manufacturing various pharmaceutical drugs such as analgesic tablets, antacid gel formulations, vitamin supplements, effervescent antacids, and powders. Due to its mild abrasive, grease cutting, and odor neutralizing properties, many household product manufacturers use it as a primary ingredient. Hence, due to its cleaning properties and alkalinity, the cleaning products segment is expected to witness steady growth in the coming years.

Increasing demand from various end-use industries, such as chemical, agriculture, pharmaceutical, and food and beverages, along with growing animal feed production, is likely to drive the market over the forecast period. The demand-supply gap is providing a lucrative opportunity for product manufacturers to establish and expand their operations and distribution facilities in North America.

In Canada, sodium bicarbonate is majorly imported from U.S. Increasing imports of natural sodium bicarbonate products, and rising demand from the pharmaceutical industry are the factors projected to drive the market over the forecast period.

Primary business players in the market invest in cost-effective and safe production methodologies of sodium bicarbonate. Companies are also trying to expand their product portfolio by focusing on developing different grades of sodium bicarbonate, which can be suitable to applications in various end-use industries.

This report forecasts revenue growth at regional and country levels and provides an analysis of the latest industry trends in each of the sub-segments from 2014 to 2025. For the purpose of this study, Grand View Research has segmented the North America sodium bicarbonate market report on the basis of application and region: