The North and South America mineral supplement tablets market size was valued at USD 2.6 billion in 2019 and is expected to grow at a compound annual growth rate (CAGR) of 4.7% from 2020 to 2027. Rising prevalence of diseases such as osteoporosis, anemia, cancer, and diabetes is boosting the market growth, as these supplements are commonly used in managing such conditions. According to the International Osteoporosis Foundation in 2015, over 15.6 million people in North America and 15.1 million people in Latin America, in the age-group of 50 years and above, were suffering from osteoporosis. According to the National Diabetes Statistics report 2020, nearly 34.2 million people in all age groups were reported to have diabetes in 2018, which accounts for 10.5% of the overall U.S. population. Increasing consumption of multi-vitamin mineral supplements owing to rising mineral and vitamin deficiencies across all populations, particularly iron and calcium, is boosting the market growth. 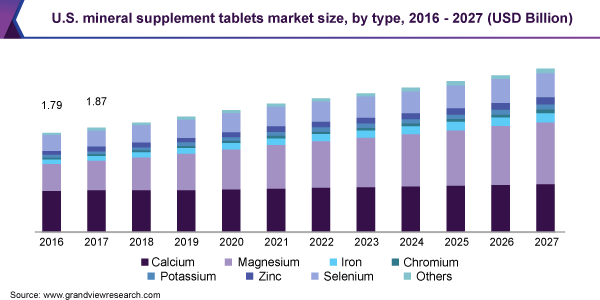 According to NutraIngredients-USA, iron deficiency is one of the most common deficiencies among the U.S. population. For instance, in 2018, about 30% of menstruating women and 42% of pregnant women in the country were reported to have an iron deficiency. Increasing disposable income and growing concern about maintaining a healthy lifestyle are some of the key factors expected to drive growth. According to a 2019 CRN survey, in 2018, about 77% of people in the U.S. were willing to pay more for products, such as organic, calcium, or mineral supplements, to improve their overall vitality and wellbeing. Changing lifestyle and eating patterns have significantly increased the risk of nutritional deficiencies, which is expected to increase both consumption and demand for multivitamin and mineral supplements. In addition, rising number of working- and middle-class people are anticipated to boost demand in the coming years. For instance, the real disposable income in the U.S. grew at an average rate of 7.5% from 2001 to 2016.

Majority of market players are focused on launching new products, adopting product differentiation strategies, and entering into industry partnerships-all of which contribute to market growth. In addition, many new exotic ingredients are being researched for developing novel products, which is likely to drive growth over the forecast period. For instance, In November 2018, Glanbia, plc. acquired SlimFast brand from KSF Holdings LLP and HNS Intermediate Corporation. The company undertook the acquisition in order to extend portfolio of Glanbia’s Performance Nutrition segment and to enter the weight management category.

The demand for mineral supplements has increased owing to a rise in prevalence of chronic conditions, such as hypertension, diabetes, migraine, stroke, and cancer. According to the International Diabetic Federation in 2019, approximately 463 million adults are living with diabetes and this number will increase to 700 million by 2045. According to the National Institute of Health, people in the U.S. spent nearly USD 2.1 billion annually on weight-loss dietary supplements, usually in pill form. Increasing awareness among consumers regarding the health benefits of these supplements is also expected to positively impact market growth. Growing geriatric population is also posing a positive impact on growth. As per the estimates published by the United Nations, the global elderly population was nearly 841 million in 2013 and is expected to reach over 2.0 billion by 2050.

Calcium supplements accounted for the largest revenue share of over 26% in the North and South America mineral supplement tablets market in 2019. Growing demand for calcium supplements, especially among women and the elderly in developing countries suffering from high nutrition deficiencies, to meet the adequate requirement of calcium in the body is driving the growth. According to the International Osteoporosis Foundation, over 14.2 million people in the U.S. suffered from osteoporosis in 2015. Easy availability of these products owing to presence of a large number of manufacturers and suppliers of calcium supplements is also expected to boost market growth over the forecast period.

However, potassium and chromium supplements are expected to account for the smallest revenue share owing to their low demand from end consumers. As the requirement for these trace minerals is not high, their need as a supplement is comparatively low, thereby limiting the growth. Ironshore Pharmaceuticals launched Jornay PM (methylphenidate HCl) extended-release capsules. This product is inducted into the Central Nervous System (CNS) and is approved earlier by the Food and Drug Administration (FDA) for treating ADHD patients aging 6 years or more. Owing to potentially harmful effects associated with high intake of potassium, the U.S. FDA has limited over-the-counter potassium supplements, including multivitamin mineral pills, to less than 100 mg, which accounts for 2.0% of the total 4,700 mg RDA of potassium.

In 2019, North America held the highest revenue share of more than 85% and is anticipated to expand at the fastest CAGR over the forecast period. Significant increase in consumption of multimineral supplements in recent years, owing to rise in prevalence of mineral deficiencies, especially that of calcium and iron is projected to bode well for the growth. Increasing prevalence of nutritional deficiency, commonly in women, is expected to boost the demand for regional product demand. For instance, in 2018, approximately 45% of pregnant women in Canada had a deficiency of more than three micronutrients, with iron and calcium deficiencies being the most common. This has led to an increase in the need for mineral supplements to bridge the nutritional gap, thereby positively impacting the growth. 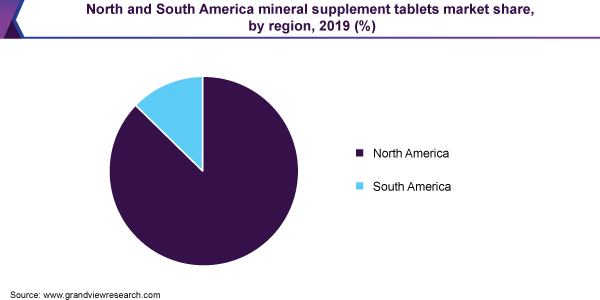 The market for mineral supplement tablets in North America has been growing rapidly owing to increasing disposable income and growing adoption of healthy lifestyle. For instance, in 2018, the disposable income in the U.S. was estimated to be USD 15,948.3 and in Canada, it was estimated to be USD 927.7 million. Moreover, rising obesity rates coupled with the increasing prevalence of diabetes among consumers in the country is boosting the demand for mineral supplements.

Rising awareness regarding health and fitness, growing trend of wellness, increasing participation in physical activities such as swimming, weight training, cycling, and jogging, and are some of the significant factors aiding market growth in South America. Rising prevalence of obesity in this region is also propelling the demand for these supplements owing to their health benefits. According to Panorama of Food and Nutrition Security in Latin America and the Caribbean, in 2017, nearly 360 million (58%) people in this region were obese. According to OECD Health Statistics 2017, Mexico has the second largest population of obese patients in OECD countries.

High investments in R&D, increase in the number of collaborations with other industry players and product differentiation are among the key strategies adopted by the market players to gain a competitive edge. For instance, In December 2018, Pfizer and GlaxoSmithKline formed a joint venture to expand their portfolio in consumer health business. The joint venture helped them to become category leaders in respiratory, pain relief, vitamin and mineral supplements, digestive health, therapeutic oral health, and skin health. GlaxoSmithKline holds 68% of the equity interest and Pfizer would have an equity interest of 32% in the joint venture. Some of the prominent players in the North and South America mineral supplement tablets market include:

This report forecasts revenue growth at global, regional, and country levels and provides an analysis of the latest industry trends in each of the sub-segments from 2016 to 2027. For the purpose of this study, Grand View Research, Inc. has segmented the North and South America mineral supplement tablets market report on the basis of type and region:

How big is the North and South America mineral supplement tablets market?

b. The North and South America mineral supplement tablets market size was estimated at USD 2.6 billion in 2019 and is expected to reach USD 2.8 billion in 2020.

What is the North and South America mineral supplement tablets market growth?

b. The North and South America mineral supplement tablets market is expected to grow at a compound annual growth rate of 4.7% from 2020 to 2027 to reach USD 3.8 billion by 2027.

b. Calcium segment dominated the North and South America mineral supplement tablets market with a share of 35% in 2019. This is attributable to their application in multiple health conditions, including hypertension, migraine, and bone health, rise in awareness about preventive care and growing number of selfdirected consumers.

Who are the key players in North and South America mineral supplement tablets market?

What are the factors driving the North and South America mineral supplement tablets market?

b. Key factors that are driving the market growth include growing prevalence of mineral deficiencies, especially zinc, iron & calcium, and rising awareness about health & fitness.