The global odor control system market size was valued at USD 5.1 billion in 2019 and is expected to grow at a compound annual growth rate (CAGR) of 5.4% from 2020 to 2027. Increasing demand to reduce malodors among various end-use industries is the key factor driving the market growth. Moreover, odors are generated during various processes involved during manufacturing, such as synthesis of chemical compounds, oil refining, microbial decomposition of organic compounds, and processing of agricultural products. Thus, the treatment of odor owing to its impact on the environment is a major concern among end-use industries, which is further bolstering the market growth. The primary objective for installing odor control systems at the end-use manufacturing industries is to improve the quality of the air. 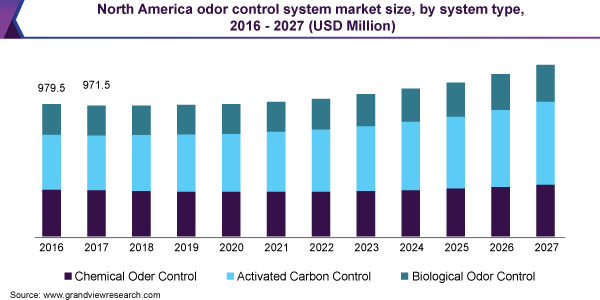 Odor control systems are used in the end-use industries, which are utilized for air purification, source treatment, and odor neutralization. The use of odor control systems is of key importance as manufacturing plants emits foul odor in the atmosphere, thus deteriorating the air quality. However, the foul odor generated during operations at the plant can also hamper the productivity of the manufacturing plants. Thus, owing to the above-mentioned concerns, the market is expected to witness significant growth during the forecast period.

Additionally, rapid industrialization in a number of developing and developed countries has substantially contributed to the pollution of the environment. Thus, the increase in the number of manufacturing facilities has resulted in the unregulated emission of gases and chemicals into the atmosphere. This combination of different gases and chemicals leads to the emission of malodor into the surrounding environment. However, growing awareness among end-use industries pertaining to the use of odor control systems is further generating avenues for market growth.

The high cost of the odor control systems coupled with high operating costs are anticipated to hamper the market growth. However, stringent government regulations and policies imposed on the end-use industries for odor control management is likely to drive the market during the forecast period. The government of several countries has implemented certain standards for the emission of gases in the environment. Thus, the manufacturing facilities have to adhere to the laws formulated in order to carry out their processes.

In terms of revenue, the activated carbon odor control system dominated the market with a share of 41.7% in 2019. The high share is attributed owing to high odor removal efficiency and low power usage. Moreover, the activated carbon odor control system provides high-efficiency and removal of gas-phase contaminants such as hydrogen sulfide, mercury, HCl, and other gaseous contaminants, which generates malodor.

Meanwhile, the biological odor control system segment is projected to witness substantial growth over the forecast period, expanding at a CAGR of over 5.0%. The moderate cost of installation, coupled with low maintenance, is anticipated to drive the segment in the odor control system market over the forecast period. Biological odor control is a biological treatment process used to remove contaminants and odor in wastewater. These systems are also referred to as bio-scrubbers or biofilters, depending upon the type of biological oxidation used during the odor treatment process.

In 2019, the power and energy end-use segment held a significant market share of more than 26.0% and is estimated to expand at a CAGR exceeding 5.0% during the forecast period. Power and energy plants generate various hazardous gases by burning fossil fuel and biomass. Gases that are generated due to the burning of these fuels include Carbon Dioxide (CO2), Sulfur Dioxide (SO2), and Nitrogen Oxide (NOx). Thus, a combination of these gases leads to the generation of malodor in the surrounding environment, which will generate demand for the odor control systems in the power and energy industries. 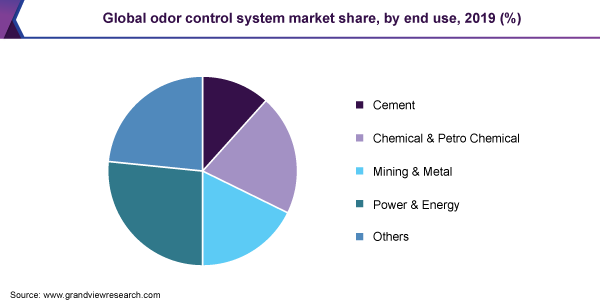 Asia Pacific dominated the market with a revenue share of 41.8% in 2019. This is attributable to the increasing demand for power and energy and rapid industrialization. Moreover, an increase in the emission of toxic pollutants and exhaust gases is creating an enormous demand for the odor control system in the region. Furthermore, stringent government regulations in countries such as India and Japan for the emission of toxic air pollutants are further generating opportunities for market growth.

Europe is expected to witness substantial growth over the forecast period, expanding at a CAGR of over 5.0% from 2020 to 2027. The major end-use industries contributing to the gas pollutants in the environment include energy and power and the chemical industry. The various sources of odor generation are due to the burning of fossil fuels in electricity generation, industrial processes, and solvent use, and waste treatment. Thus, in order to comply with the government standards for gaseous pollution in the environment, the industries are adopting odor control systems.

The market is fragmented in nature and characterized by a high degree of competition among key operating players. These players are focusing on enhancing their market presence by adopting various strategies such as mergers, acquisitions, and joint ventures or collaborations. These strategies help organizations to expand their business geographically and enhance their offerings in particular regions.

The industry competition is anticipated to intensify further as several companies are focusing on the development of advanced and cost-effective system types and technologies. For instance, the key players in the market are focusing on providing low cost and low maintenance products to hold a significant share in the market. Moreover, the major operating players are investing in research and development to offer a better system type. Thus, the market is witnessing a stiff competition among the key operating players. Some of the prominent players in the odor control system market include:

This report forecasts revenue growth at the global, regional, and country levels and provides an analysis of the latest industry trends in each of the sub-segments from 2016 to 2027. For the purpose of this study, Grand View Research has segmented the global odor control system market report based on system type, end use, and region:

How big is the odor control system market?

What is the odor control system market growth?

b. Asia Pacific dominated the odor control system market with a share of 41.8% in 2019. This is attributable to rapid industrialization and an increase in the emission of toxic pollutants and exhaust gases in the region.

Who are the key players in odor control system market?

What are the factors driving the odor control system market?

b. Key factors that are driving the market growth include increasing demand to reduce malodour across various end-use industries coupled with stringent government regulations for air pollution control.