Growing offshore oil & gas exploration and production activities particularly in the Gulf of Mexico, Caspian, Arabian Sea and the Red Sea is expected to drive the global industry over the forecast period. Regulatory policies play a vital role in shaping the industry development. Regulatory agencies such as the U.S. EPA, REACH, and ECHA constantly evolve, formulate and establish environmental policies associated with their usage. 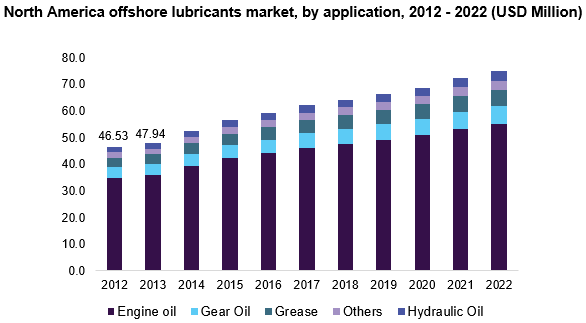 Other bodies such as BEACH (Beaches Environmental Assessment and Coastal Health) amended acts such as the Clean Water Act to regulate and control petrochemicals pollution in water bodies such as oceans & seas.

The U.S. EPA has formulated vessel general permit (VGP) guidelines for vessels operating in waters of the U.S. These VGP requirements are a set of guidelines established reduce aquatic environment impact by prescribing a set list of environmentally acceptable lubricants (EAL).

The global market is characterized by volatile raw material prices coupled with stringent environmental regulations for manufacturing conventional lubricants. To overcome these challenges, manufacturers have been collaborating with biotechnology companies to develop bio-based alternatives. This is further supported by governmental favors and tax incentives for employing clean technologies.

Bio-based lubricants have been gaining importance owing to their environmental friendly properties. Growing emphasis on aquatic pollution through the unregulated disposal of conventional lubricants has also been a major factor for the development of bio-based alternatives.

On the basis of application, the global industry has been segmented into engine oil, hydraulic oil, gear oil and grease along with other applications such as cylinder oil, turbine oil, and compressor oil. Engine oil was the leading application segment and accounted for over 74% of the overall market volume in 2014. Growing maritime traffic on account of increasing international trade is expected to be the major driving factor. However, engine oil is expected to lose market share and account for 73.1% of the total market volume by 2022, primarily due to increasing demand for grease and gear oil.

Engine oils are largely used in vessel engines, boat engines, and container engines. Engine oil plays a crucial role in assisting engines to optimum efficiency in their output. These oils are formulated specifically for speed and stroke of engines. They prevent engines from rusting, wear & tear. Growing maritime traffic is expected to drive engine oils demand over the forecast period.

Grease is expected to register the highest volume growth over the forecast period owing to its increasing consumption in offshore machinery, vessels, and other oil & gas equipment. Manufacturers prefer maintaining the efficiency of their equipment in order to reduce their overall downtime and thereby reduce operational costs. This factor is expected to influence high demand over the forecast period. 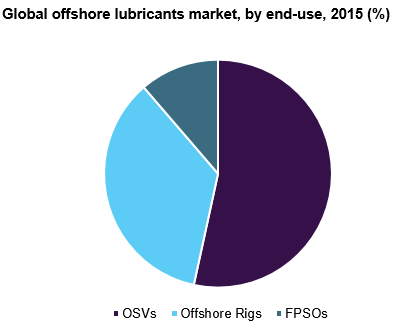 AHTS provides anchor for semi-submersible rigs, FPSOs, accommodation barges, etc. Increasing utilization rates of OSVs are directly implied through their rise in maintenance, which in turn is expected to drive the offshore lubricants demand.

Increasing OSVs utilization due to rising deepwater reserves exploration and production will give rise to greater maintenance resulting in higher demand for lubricants such as engine oils, gear oils, compressor oils, hydraulic fluids and transmission fluids.

Regional markets analyzed in the report include North America, Europe, Asia Pacific, and the Middle East. Asia Pacific was the largest consumer and accounted for over 27% of the overall market volume in 2014. Increasing offshore projects in India, Indonesia, Malaysia and China is expected to drive the region’s growth over the forecast period.

On the other hand, economic growth has facilitated for greater maritime trade in the region. Due to this, sea traffic has considerably increased in the recent pasts. This factor is expected to strengthen offshore lubricants demand in Asia Pacific.

Companies integrated into distribution have a distinct advantage of reaping profit margins which are otherwise attributed to the distributors. This direct level of marketing their products is generally conducted through factory sales centers or outlets. Major companies involved in supply & distribution include Bruke Lubricants, Lynx Marine, Tropic Oil, and Crown Oil.

Technology innovation, product development, and production optimization are crucial for industry participants to maintain a competitive edge. There is also a considerable presence of integrated players who are involved in raw material and base oil manufacturing along with lubricants.

This report forecasts revenue and revenue growth at global & regional analysis and provides an analysis on the industry trends in each of the sub-segments from 2012 to 2022. For this study, Grand View Research has segmented the global offshore lubricants market on the basis of application, end-use, and region.