The global offshore mooring systems market size was valued at USD 1,086 million in 2016. Rapid expansion of oil and gas E&P from the offshore fields along with the rising development of high-temperature gas hydrate basins for sustainable future growth is expected to drive the industry over the forecast period.

Constantly increasing requirements for subsea explorations, commercialization of wind & hydro-energy farms in the U.S. coastal regions especially in the Gulf of Mexico have led to large deployment of advanced mooring system installations. Growing energy demand across North America coupled with a shift towards clean electricity is expected to steer the market expansion in the region.

The growing offshore complexities and many of the adverse mooring accidents in the past have influenced the newly framed regulations. The new regulations framed have strict directions for some specific areas, which include mooring system of design, installation assurance & methodology, operations, inspection & maintenance, recovery preparedness & tracking, and development of common met ocean & soil type data sets.

Crude oil price slump over the past three years has tremendously impacted the profitability of the industry participants across the upstream petroleum value chain, thereby, leading to discontinuation of various offshore activities. North America offshore rig count fell around 30% as compared to the previous year (2016). Discontinuation of offshore activities worldwide along with growing pressure on operating companies by organizations such as OPEC to reduce daily production rates are the key challenges faced by the offshore mooring systems industry participants.

Spread mooring systems dominated the global demand while accounting for over 32% of the total revenue in 2016. These are the most commonly used moors that can be utilized in a wide range of platforms ranging from mobile offshore drilling units (MODU) to the ships with catenary systems being the major product category.

Single point mooring (SPM) systems are generally used on ships that allow them to weathervane into environmental conditions. The ship is often free to rotate through 360 degrees. Most of the SPM are turret based which are mostly used in floating, production, storage & offloading (FPSO) platforms, FLNG ships, and service vessels. The segment is expected to reach a net worth exceeding USD 66 million in North America by 2025.

The tendons & tension systems are used for horizontal movement with wave turbulence and bobbing, owing to this it is used for stability, such as in the hurricane-prone Gulf of Mexico. Dynamic positioning is also estimated to witness above-average growth over the next nine years with significant deployment of the CALM and SALM systems, especially for the ships. The market is driven by the development of vessels, which include floating, production, storage and offloading (FPSO), floating, drilling, production, storage and offloading (FDPSO) and fluidized liquid natural gas (FLNG).

The FPSO market has witnessed decent growth in the past few years, based on the increasing demand for global energy, and the rise in investments from operators for deep-water drilling activities. North America offshore mooring systems demand in FPSO is estimated to grow at a CAGR of 1.9% over the forecast period.

SBM Offshore has designed and constructed the world’s largest internal turret mooring system, for the Shell Prelude FLNG, which is currently under integration in Korea. The turret weighs around 12,000 tons and was designed to enable the FLNG facility to resist the most extreme weather conditions so allowing it to safely remain on location.

FPSO, FLNG, TLP, and semi-submersible platforms are on high demand for oil and gas offshore exploration, production, and storage facilities. One of the new examples of the offshore platform along with the mooring system is Gulfstar FPS, developed by Williams Partners L.P. It is a flexible 21,500-ton oil & gas production solution for deepwater producers in the Gulf of Mexico. Along with it, “Timberland” provided for the Gulfstar’s 9-point mooring system including chain jacks, underwater fairleads, and electro-hydraulic power unit for its mooring operations. 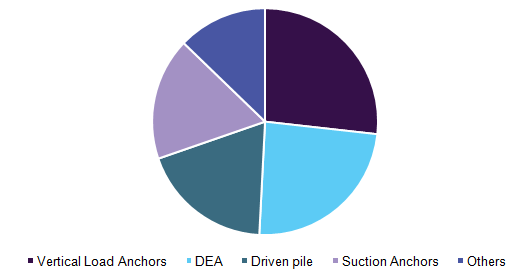 The difference is that when the VLA reaches its design depth, the angle the anchor makes with the mooring line changes, which enables the system to withstand the vertical load. When the anchor has to be removed, the mooring line is pulled in the direction the anchor is not facing, after which the anchor can be pulled out relatively easy. Driven piles are deep foundation elements driven to a design depth or resistance. If penetration of dense soil is required, predrilling may be required for the pile to penetrate to the design depth.

Asia Pacific offshore mooring systems market dominated the global industry while accounting for over 28% of the total revenue in 2016. Offshore activities especially in the South China Sea (spread across countries including China, Vietnam, Thailand, Philippines, and Myanmar) only accounted for over 11% of the global industry.

Additionally, countries such as Australia, Vietnam, China, and Indonesia have emerged as the leading FPSO markets globally. The regional market is anticipated to witness overwhelming growth over the next eight years owing to increasing oil and gas E&P to further boost domestic production and reduce the dependence on imports.

In Europe, the market is expected to witness significant growth owing to rising demand in industries such as subsea exploration, renewable energy, and petroleum. Countries including Germany, France, UK, Netherlands, and Italy are anticipated to have brisk progress over the forecast period. High technological developments concerning maximum utilization of wind energy and wave energy is anticipated to boost the overall market over the next few years. However, strict environmental regulations and HSE norms may adversely affect the market

The offshore drilling industry in the Middle East is anticipated to grow over the forecast period in spite of challenges faced in deepwater drilling worldwide. Key players including BP and Total are investing in the region and have become the leading stakeholders. Countries such as Qatar and Saudi Arabia are developing their shallow and deep-sea reserves for offshore drilling.

Some of the major service providers and fabricators in the industry would include MODEC, Offspring International Ltd., Mampaey Offshore Industries B.V., Lamprell, and BW Offshore Ltd.

There are various end-uses of the mooring systems in the offshore oil and gas industry. Some of these include FPSO, FLNG, tension leg, and semi-submersible platforms.

Companies such as Balltech Engineered Solutions, FMC Technology, Inc., and SBM Offshore are highly integrated into the value chain. They offer mooring system design, planning, technologies, components, and even services to the offshore oil and gas industry.

This report forecasts revenue growth at global & country levels and provides an analysis of the trends in each of the sub-markets from 2014 to 2025. For the purpose of this study, Grand View Research has segmented the offshore mooring systems market on the basis of product, application, anchorage, and region: