The global omega 3 supplement market size was valued at USD 33.04 billion in 2016. Rising trend towards a sedentary lifestyle among youth has resulted in the growing number of chronic diseases such as coronary heart diseases & strokes, arthritis, and cancer including prostate & colon, which is expected to drive the market growth. In addition, increasing consumer awareness regarding health benefits from the consumption of omega 3 supplements is expected to further support the growth of this industry over the forecast period.

Growing concerns toward the health of infants are expected to drive the market for infant formula. In addition, governments across various regions, particularly Asia Pacific and Latin America are educating people about the importance of infant health, which is further expected to fuel the growth. Numerous companies including Nestlé, Mead Johnson, Abbott Laboratories, and Danone have been conducting extensive R&D to serve the consumers with more infant suitable formulas, which is expected to have a positive impact on the industry over the coming years.

Manufacturers of the product are likely to experience high costs due to increasing environmental pollutants affecting the marine life and expensive purification process associated with it. However, few companies are switching to substitutes such as plant-based and krill-based products to overcome the problems with fish oil.

Retail stores and online selling are the two major distribution channels in the market. Numerous companies including Now Foods, Jamieson Laboratories, Nordic Naturals, and Ascenta use online retail channels such as Amazon and Walmart for the sale of their products. Increasing consumer exposure to online media is likely to enhance the customer base for market players.

Sardine fish oil accounted for 23.2% market share in 2016. The sardine fish, apart from concentrated omega 3, contains additional beneficial elements such as protein, vitamin D, and vitamin B-12. Sardine species are less prone to metal intake as they feed on plankton, which increases their suitability for human consumption.

Sardine fish oil is suitable for infant formula application. The continuous intake of sardine based products by nursing mothers helps in increasing omega 3 levels in breast milk, which in turn helps in the development of a newborn. Increasing utilization of infant formula is expected to provide a positive scope for sardine-based fish oil.

Fish oil accounted for a share of 83.5%, in terms of revenue, globally in 2016. The availability of different types of fishes that are high in vitamins and beneficial for the human body is facilitating supplement manufacturers to offer diversified products. Various benefits offered by fish oil are expected to augment market growth over the forecast period.

The demand for anchovy-based products accounted for a share of 48.6% in 2016. Anchovy, due to its smaller size and relatively short life span, is not prone to many environmental and hazardous pollutants. The availability of the fish with fewer toxins and high omega 3 concentration is likely to drive the utilization of anchovy fish oil for the manufacturing of supplements. 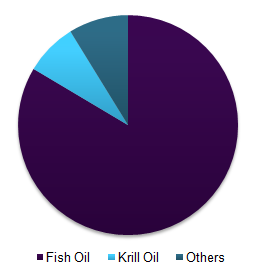 Anchovy fish oil serves an average of 3.4 grams of omega 3 fatty acids, however, 6 ounces is considered as a typical serving size. The fish oil extracted from anchovy also contains omega 6 fatty acids. Therefore, these factors are likely to increase the utilization of anchovy oil in the product.

Increasing consumption of non-animal-based supplements is expected to hinder industry growth. The increasing manufacturing expenses due to the presence of toxins coupled with decreasing production globally are anticipated to restrict the utilization of fish oil in the industry.

Krill comprises the largest biomass on the earth, which is expected to ensure krill oil as a continued raw material source for the manufacturing process, thereby elevating the industry growth. Krill oil sourced from Antarctica is considered the best. The EPA and DHA in krill are present in the form of phospholipids, which are easy to absorb. The beneficial properties of krill oil are likely to promote its utilization in the manufacturing of omega 3 supplements.

Other sources include algae, squids, and plants. Squids, apart from omega 3, also contain various elements, such as vitamin B-6, vitamin B-12, zinc, calcium protein, phosphorous, magnesium, iron, and niacin, which are likely to have a positive impact on the market.

Infant formula dominated the industry accounting for a revenue share of 41.6% in 2016. The segment has been witnessing rapid demand on account of growing importance of omega 3 supplements and ALA for the functional development of infants during pregnancy and the first two years after childbirth. DHA is a long-chain polyunsaturated omega 3 fatty acid, which forms up to 97.0% of omega 3 fats in the brain and 93.0% in the retina.

Infant formula manufacturers maintain a strong relationship with healthcare providers, who, in turn, promote their brands in various hospitals. The governments in developed economies, such as the U.S., provide people with subsidies through food stamps and special supplemental nutrition program for Women, Infants, and Children (WIC), which is expected to propel the growth over the forecast period.

The demand for food & beverages in 2016 was USD 9.75 billion. The segment is likely to witness rapid growth over the forecast years on account of advancements taking place in the field of sources, product forms, and encapsulation & emulsification technologies.

North America's omega 3 supplement market is expected to witness a CAGR of 2.0% from 2017 to 2025. Improved medication and better health supplements are expected to drive the demand in the pharmaceutical industry in the region. The rising prevalence of chronic diseases coupled with the willingness of consumers to spend has facilitated the easy availability of better healthcare solutions.

Omega 3 supplements are widely and actively used in the pharmaceutical industry owing to the growing health benefits. One of the important health benefits, which propels its use in the pharmaceutical industry, is its anti-inflammatory property. The growing use of the product to treat depression, cardiovascular diseases, cancer, osteoporosis, and Alzheimer’s disease is expected to positively impact market growth.

The growing use of omega 3 in manufacturing pharma-grade capsules for treating obesity is expected to drive the market demand across developed economies. Europe is the third major market, which accounted for a share of 25.6% in 2016. The high old age population, particularly in developed countries including the UK, is expected to drive the demand.

The global omega 3 supplements market is highly competitive with the presence of a large number of multinationals and small manufacturers operating businesses through high production volumes. The companies in the industry are highly integrated and involved in the production of omega 3 from various sources, such as fish oil, krill oil, and others, to the sales & distribution of the end products to various locations.

The companies are involved in the research & development for the production of superior quality supplements that provide improved health benefits and pose no risk of side effects. In addition, the companies also opt for technological collaborations in order to strengthen their efforts for new product development.

This report forecasts revenue growth at the global, regional, & country levels, and provides an analysis of the industry trends in each of the sub-segments from 2014 to 2025. For the purpose of this study, Grand View Research has segmented the global omega 3 supplement market on the basis of source, application, and region: