The global on-road motorcycles market size was valued at USD 56.8 billion in 2021 and is estimated to expand at a compound annual growth rate (CAGR) of 6.1% from 2022 to 2028. The rising focus by manufacturers on manufacturing high-performance and comfortable on-road motorcycles is the key factor driving the growth of the market. Moreover, the increase in sports bike users and the growing trend of customization are some of the factors swelling demand for on-road motorcycles and driving the market. The COVID-19 outbreak negatively impacted the market. This is due to the shutting of plants in top motorcycle manufacturing nations such as China, Japan, India, and ASEAN. This has also affected the supply of components to the manufacturing services globally and stuck the production as large numbers of manufacturers are reliant on the supplies from China. 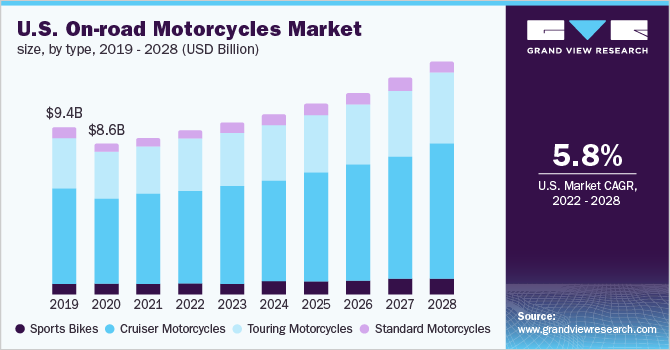 The COVID-19 pandemic has negatively affected the on-road motorcycles market. Numerous customers have canceled bookings, which were made before the crisis. The current situation is an unprecedented one for the industry. Concern over the lack of clarity has been issued by major two-wheeler manufacturers from around the world. India, China, and Japan have been hit the hardest. However, manufacturers are optimistic that following the end of the lockdown period, customers will be more likely to evade public transport, increasing the demand for private vehicles, including motorcycles, which in turn will surge demand for on-road motorcycles over the forecast period. 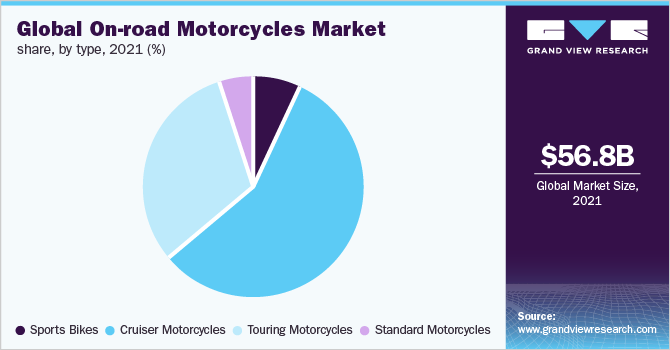 Europe is forecast to register the 2ndhighest CAGR of 6.0% from 2022 to 2028. According to the European Association of Motorcycle Manufacturers (ACEM), major countries in Europe such as Germany, Italy, France, the U.K., and Spain account for about 80.0% of on-road motorcycle registrations in 2020. The emerging trend of vehicle ownership, particularly among the millennial population, is also propelling the market growth in the region. Moreover, the growing travel and tourism industry in Europe has led to the rise of bike-rental services, thus further boosting the demand for on-road motorcycles. Thus, the market for on-road motorcycles in Europe is expected to witness a considerable CAGR over the forecast period.

Regional analysis revealed that the Asia Pacific accounted for a significant revenue share of more than 62.0% in 2021. According to Infineum International Limited, India, China, Indonesia, and Vietnam are the major countries that generated maximum revenue for the on-road motorcycle market. With high demand for on-road motorcycles in the developing countries of Asia such as India, Japan, Indonesia, and Vietnam, OEMs are creating manufacturing facilities in these nations to avoid paying import duties and to gain an edge in the motorcycle market. Thus, the demand for on-road motorcycles is high in the Asia Pacific and it contributes to more revenue generation in this region.

The market is characterized by the existence of established as well as new companies. Most of the players are concentrating on the development of engines to gain popularity among users and increase market share. Additionally, fuel efficiency holds a prominent place in the market. Hence, players are leading efforts towards its development. Some of the other strategies include expansion measures such as collaborations and new product launches. For instance, Harley-Davidson Incorporation launched eight new versions of Softail cruiser motorcycle and five new versions of touring motorcycles thus growing its product portfolio. Some of the prominent players in the on-road motorcycles market include:

This report forecasts revenue growth at global, regional, and country levels and provides an analysis of the latest industry trends in each of the sub-segments from 2017 to 2028. For the purpose of this study, Grand View Research has segmented the global on-road motorcycles market report on the basis of type and region:

How big is the on-road motorcycles market?

What is the on-road motorcycles market growth?

Which region accounted for the largest on-road motorcycles market share?

Who are the key players in the on-road motorcycles market?

What are the factors driving the on-road motorcycles market?