The global opioid use disorder market size was valued at USD 1.9 billion in 2018 and is anticipated to grow at a CAGR of 10.1% over the forecast period. An increase in the opioid epidemic in the U.S. coupled with the establishment of government policies to control the crisis is driving the market.

Opioid Use Disorder (OUD) is a chronic condition associated with compulsive, prolonged, and repeated self-administration of opioids. There are two types of patients suffering from OUD: patients who are addicted to non-medical opioids and patients addicted to medical opioids. A single factor cannot be accounted for OUD, but a combination of environmental and genetic factors influence the patient. 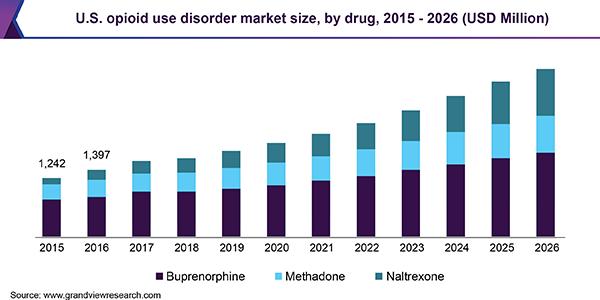 According to the CDC, in 2016, around 2.1 million Americans had OUD. The shift from opioid abuse to opioid addiction results from drug-induced changes in the brain. The most commonly abused opioids are oxycodone, codeine, hydrocodone, morphine, and fentanyl. Physical dependence is the most harmful long-term effect; withdrawal symptoms happen if opioid use is abruptly reduced. The number of opioid addiction cases is rapidly rising every year, making opioid dependence a serious public health issue.

Current treatments are based on Medication-Assisted Treatment (MAT) with an opioid agonist or an opioid antagonist. It has been observed that people with OUD who follow detoxification with complete abstinence are highly likely to relapse. MAT uses medicines that reduce the negative effects of cravings and withdrawals without producing the euphoria that the original drug caused. MAT includes the use of medicines in combination with behavioral therapies and counseling, which is effective in OUD treatment and can help some people to sustain recovery.

Currently, there are quite a few drugs that are approved for the treatment of OUD. These can be divided into opioid agonists and antagonists. These drugs are widely available and have been genericized across different markets. However, a lot of these drugs have been reformulated and launched in recent years. Pipeline therapies are focusing on reformulations as well as a novel mechanism of action to combat opioid addiction. The commercialization of these agents is projected to be one of the leading drivers of the opioid use disorder market over the forecast period.

Buprenorphine, methadone, and naltrexone are the three approved opioid drugs for the treatment of OUD. All three treatments have been demonstrated to be effective and safe in combination with counseling and behavioral therapy. Buprenorphine was the largest revenue-generating segment in 2018. Buprenorphine/naloxone sublingual tablets, buprenorphine sublingual tablets, and branded Suboxone are the most widely prescribed drugs for OUD. Suboxone Film is the most prescribed drug in the OUD market, due to its excellent clinical profile. High efficacy in managing addiction, with low potential for abuse & relatively mild adverse effects and its favorable formulary coverage, are factors that can be attributed to the high adoption of this drug. 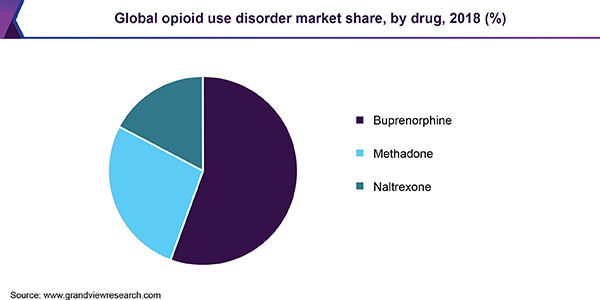 The first once-monthly product of Buprenorphine-Sublocade-is estimated to be the largest and fastest-growing product over the forecast period. It is a drug-device combination treatment that uses buprenorphine and the Atrigel delivery system in a pre-filled syringe. Sublocade addresses the limitations of existing treatment by replacing daily oral medications with an injectable, thereby making diversion and abuse difficult and improving quality of life.

North America was the largest revenue-generating region in 2018 and is expected to show the same trend over the forecast period. The opioid epidemic in the U.S. and Canada is one of the biggest factors contributing to the largest market share of North America. Governments are introducing several policies to control the crisis. For instance, in January 2018, the U.S. government launched an awareness advertising campaign to combat opioid addiction.

Furthermore, the U.S. market is further expected to witness new products entering the market over the forecast period, such as Braeburn’s CAM-2038-additional buprenorphine subcutaneous formulation for, potentially, monthly injection. If approved, it will have a benefit over Sublocade-Sublocade needs an initiating treatment with oral buprenorphine for 7 days till dose stabilization, while CAM-2038 will not have this prerequisite. This is likely to further boost the North America OUD market.

Some of the key players in the OUD market are Indivior, Alkermes, Titan Pharmaceuticals, Hikma Pharmaceuticals, Teva Pharmaceuticals, MediciNova, Orexo, Camurus, and Omeros. Key players are adopting different strategies such as mergers & acquisitions to increase their market share. Furthermore, players are also focusing on launching their products in different regions to increase their market share. For instance, in December 2018 Orexo AB announced that it obtained the rights to commercialize Zubsolv in all the regions outside the U.S. from its current partner Mundipharma.

This report forecasts revenue growth at global, regional, & country levels and provides an analysis on the latest industry trends in each of the sub-segments from 2015 to 2026. For the purpose of this study, Grand View Research has segmented the opioid use disorder market based on drug and region: