The global optogenetics actuators & sensors market size was estimated at USD 504.74 million in 2017. An increase in the popularity of optogenetics, coupled with a rise in the burden of neurological and retinal disorders, can be attributed to the growth of this market. In addition, the rise in government initiatives for advancements in neuroscience is expected to drive the market over the forecast period. 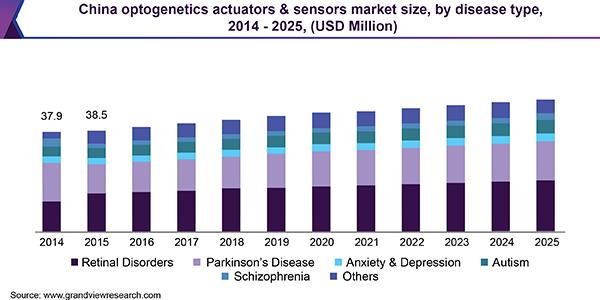 Advancements in optogenetics have been on a rise. The technique allows imaging and visualizing different regions of the brain and functions responsible for memory, emotion, and attention. This helps prevent the development of inherited neurological and psychiatric disorders. Currently, various ultrathin and flexible microchips are employed as injectable devices that put nerves under wireless control.

In many countries, governments provide funds to research institutions as well as individual researchers for introducing novel technologies in neuroscience and ophthalmology, which is expected to drive the market in the coming years. Key initiatives undertaken by international organizations such as the World Health Organization (WHO) and the National Institute of Health (NIH) in the field of mental health in various regions have fueled the growth of optogenetics.

Recently, researchers at Massachusetts Institute of Technology (MIT) developed novel fibers that mimic the flexibility of brain tissue and are able to deliver chemical, electrical, and optical signals back and forth into the brain. These small fibers can be retained in the brain for a longer period and are also able to build better brain-computer interfaces.

Recently, the U.S. House Committee proposed a bill for 2018 that is anticipated to expand the research budget allocated to NIH. This is expected to enhance resources for the development of the healthcare segment. Labor, Health and Human Services and Education (LHHS) proposed USD 35.2 million in funding for NIH, which will prove to be beneficial for biomedical programs.

In addition, various ongoing studies are being conducted to develop fast fluorescent protein voltage sensors. Scientists are developing such sensors by optimizing Foster Resonance Energy Transfer (FRET) interactions, which can be helpful in monitoring in vivo neuronal activities. These studies are funded by private and public organizations and are expected to boost segment growth in the coming years.

Gensight Biologics announced that it has completed the enrollment of the RESCUE phase III study of GS010 for the treatment of Leber Hereditary Optic Neuropathy (LHON) in order to offer patients sustainable functional visual recovery. The company is developing a lead product candidate-GS010-along with an external wearable medical device for stimulation of transduced cells.

Circuit Therapeutics, Inc. announced its collaboration with H. Lundbeck A/S, a global pharmaceutical company that specializes in psychiatric and neurological disorders. This collaboration is expected to enhance and extend the understanding of neural circuits and is anticipated to boost the development of novel drugs to treat psychiatric disorders. To achieve their objectives, both companies are using Circuit’s proprietary optogenetics technology platform.

Furthermore, companies are developing and launching optogenetic tools and screening systems for behavioral testing of rodent models in studies pertaining to neuroscience. These products are further used to develop novel and potential therapeutics for neurological problems such as autism spectrum disorder.

Retinal disorders account for the largest share in the optogenetics actuators & sensors market. An increase in the incidence of retinitis pigmentosa, glaucoma, and diabetes-related retinal diseases is a major factor driving the segment. According to data presented by the National Institute of Health (NIH), at present, more than 2.7 million people in the U.S. have glaucoma and the number is expected to reach 4.2 million by 2030. Currently, more than 7.7 million people aged 40 and older have diabetic retinopathy, which is expected to reach 11 million by 2030.

Rise in incidence of neurological and mental disorders such as Parkinson’s disease, depression, and schizophrenia is driving the neurological disorders segment. The NIH encourages various studies and programs on neurological disorders and psychiatric well-being in order to reduce the burden of brain disorders globally. In addition, various organizations are focusing on investments, developments, and fellowship grants to support initiatives in this field.

Scientists from Gladstone Institutes have recently discovered a brain circuit to treat Parkinson’s disease, which helps control walking and identify new targets. Scientists utilize optogenetics to stimulate “go” and “stop” pathways responsible for triggering locomotion while recording neural activities in brains. The study revealed that the specific set of neurons in the brainstem is essential and adequate to initiate movements.

North America dominated the global market, with the U.S. at the forefront. Local presence of market players, continuous R&D, technological advancements, and well-established healthcare framework in the region are some of the factors attributed to the dominance of this region.

Moreover, funding from public and private entities is a major factor driving the market in North America. Recently, the National Institute of Neurological Disorders & Strokes (NINDS), which is a part of NIH, invested around USD 107 million for research pertaining to Parkinson’s disease. The organization is also initiating a number of programs including Parkinson’s Disease Biomarkers Programs (PDBP), research, and discovery-oriented initiative to reduce the burden of neurodegenerative and mental disorders in the region. 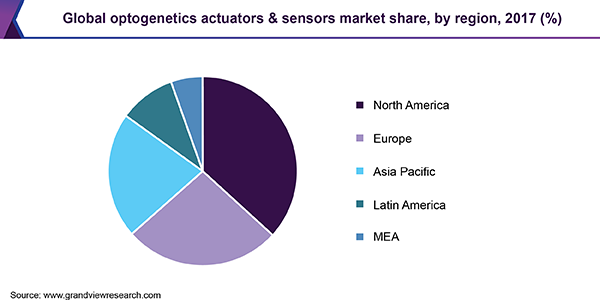 Asia Pacific is expected to be the fastest-growing segment due to emerging economies in the region and an increase in R&D expenditure. Furthermore, collaborations among entities are anticipated to fuel revenue generation. In addition, the region’s participation in various conferences and seminars is anticipated to drive the market.

Intensive investigations are contributing to technological progressions in the region. For instance, studies conducted by the RIKEN-MIT Centre for Neural Circuit Genetics and Japan Science and Technology Agency in collaboration with international entities are expected to drive regional growth in the coming years.

Currently, some of the major players are collaborating with other entities to enhance their product portfolios in order to develop novel optogenetic therapies and devices that can potentially restore retinal and neurological functions. Companies are also expanding their R&D and management facilities in order to expand their business facilities and hold a competitive edge in the market.

For instance, Circuit Therapeutics, Inc. collaborated with Boehringer Ingelheim, a Germany-based pharmaceutical company. According to the agreement, Circuits Therapeutics, Inc. will provide its optogenetic technology platform to identify and characterize new drug targets from brain circuits. The company’s aim is to develop novel therapies to treat psychiatric disorders. This association is expected to drive technological developments in the field.

Furthermore, Merck KGaA announced its collaboration with LabCentral, a U.S.-based research resource, and lab space provider for startups and individual entrepreneurs. The company is expected to sponsor startups at LabCentral and eventually accelerate studies in the field of life science. Such partnerships are expected to boost research and development of novel therapies for neurological disorders in the coming years.

This report forecasts revenue growth at global, regional, and country levels and provides an analysis of the latest industry trends and opportunities in each of the sub-segments from 2014 to 2025. For the purpose of this report, Grand View Research has segmented the global optogenetics actuators & sensors market report on the basis of product, disease type, and region:

How big is the optogenetics actuators and sensors market?

What is the optogenetics actuators and sensors market growth?

Which segment accounted for the largest optogenetics actuators and sensors market share?

b. North America dominated the optogenetics actuators and sensors market with a share of 38.9% in 2019. This is attributed to the local presence of market players, continuous R&D, technological advancements, and well-established healthcare framework.

Who are the key players in optogenetics actuators and sensors market?

What are the factors driving the optogenetics actuators and sensors market?

b. Key factors that are driving the market growth include increase in popularity of optogenetics, coupled with rise in burden of neurological and retinal disorders.