The global ornamental fish market size was valued at USD 5.0 billion in 2018. Growing millennials’ interest in colorful ornamental fishes for the aquarium as a part of the luxury lifestyle at the global level is expected to remain a key factor for the industry growth. Furthermore, various scientific studies revealed that the use of ornamental fishes in household aquariums is expected to provide psychological advantages to the millennials in terms of reducing stress after a daily hectic schedule, along with providing a feeling of good experience.

It has been observed that the consumers are more inclined towards purchasing these species due to their attractive features, along with various characteristics. It is also considered that ornamental aqua species have a calming and tranquil effect on people who prefer to watch them glide serenely through the water. Additionally, aquariums have become an important feature in home decor. Rising interest in keeping ornamental species, coupled with the introduction of different types of exotic species with attractive colors, will drive the demand for these ornamental fishes in the upcoming years. 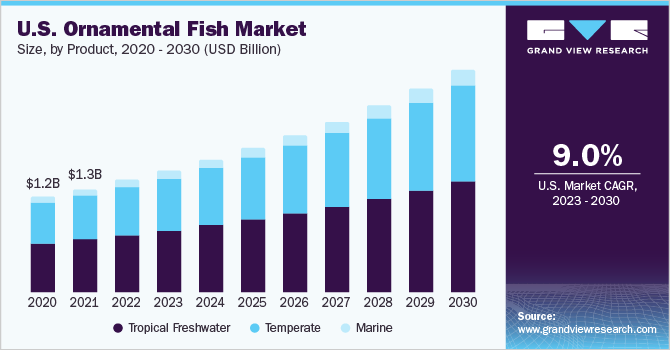 Developed countries including U.S., Germany, France, and U.K. are the market leaders in the terms of pet adoption but there are several other countries such as China, India, Japan, and Brazil, which have been in the frontline in terms of growth of this segment. According to “The American Pet Products Association”, pet adoption in the U.S. households was around 68% in 2018. This high rate of pet adoption in the U.S. is expected to expand the market reach for ornamental fishes as pets.

The governments of various countries such as China and India have been increasing spending on the improvement of tourism infrastructure at the domestic level. This trend is expected to increase the establishment of new hotels as well as restaurants and thus, in turn, will promote the utility of ornamental fishes for decorative purposes over the next few years.

Tropical freshwater species led the market and accounted for 52.2% share of the global revenue in 2018. Most of the species under this product category are easy to care and available in many colors. Furthermore, new beginner pet owners prefer to keep tropical freshwater ornamental fish due to its convenience and unique colors.

Marine fish species are expected to be the fastest-growing segment, with a CAGR of 9.0% from 2019 to 2025. These types of species require special attention but they come with an attractive look, which will increase the market scope in the upcoming years. Marine aquaria are subdivided into three categories including reef aquaria, fish only (FO), and fish only with live rock (FOWLR). Fish only tanks can keep different types of aggressive and large marine species including Triggers, Groupers, Scorpions/Lions, Puffers, Snappers, Squirrels, Hawks, and Tangs. Companies are offering chemical and mechanical filtration aquarium to keep these types of fishes.

The household application segment generated a revenue of USD 3.6 billion in 2018. A large number of the urban population in developed countries including the U.S., the U.K., and Germany prefer to keep pets in their home. Restrictions to keep dogs and cats in small apartments are driving people to purchase ornamental aqua species. Also, some of the health experts recommend that spending some time every day to watch moving fish can significantly reduce stress level. Increasing work pressure, coupled with hectic daily life, is driving people to adopt these ornamental products in their homes. 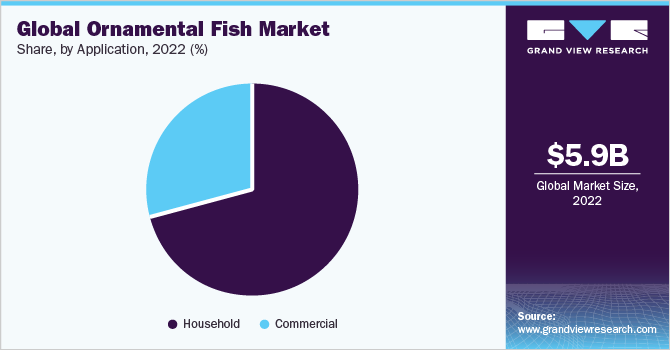 The commercial segment is expected to be the fastest-growing application, expanding at a CAGR of 8.4% from 2019 to 2025. The rising requirement of attractive decoration at hotels, restaurants, and shopping malls is driving the consumers to spend on aquariums. Companies are offering ornamental species with an aquarium of different shapes including rimless, half land half water, square, pentagon, and hexagon that can match the interior decors. Many manufacturers are providing customized aquarium with colored fishes that can match with the room paints. It has been observed that restaurants and hotels are inclined towards keeping marine fish with large tanks, which attracts people due to its size and beauty. Furthermore, a rising number of hotels and restaurants at the global level as a result of increased spending by the governments of various countries on nationwide tourism development is expected to expand the scope for these ornamental products in aquariums over the next few years.

Europe was the largest regional market with a revenue of USD 2.0 billion in 2018. A large number of populations across the region prefer to spend their leisure time with pets at home. Keeping ornamental fish can reduce stress and provide home comfort, which is driving a large number of people to purchase these types of ornamental fishes. It is the second most popular hobby across the region. U.K., Germany, France, and Norway are projected to remain the key markets over the next few years.

Asia Pacific is the fastest-growing market with a CAGR of 9.2% from 2019 to 2025. Increasing consumer preference towards fish as a pet with growing disposable income especially among the youth working population in countries including China, India, Sri Lanka, and Bangladesh is expected to boost the ornamental fish market. Growing investment in commercial properties in developing countries will lead to an increase in the sale of ornamental species as a home decor product in the upcoming years.

The market is highly competitive due to the presence of small and large private level companies. Companies are investing in ornamental fish farming projects to increase their revenue. Some of the major companies operating in this market are Aqua Nautic Specialist (ANS), AlgaeBarn LLC, Florida Tropical, BioAquatix, Aqua Leisure, Imperial Tropical Freshwaters, Captive Bred, Oasis Fish Farm, and Shanghai Wanjin. Governments of different countries are also taking initiatives to increase export. For instance, in July 2018, seven fisheries institutes of India had launched an ornamental fish culture project to develop adequate technologies in seed production, breeding, and culture of freshwater and marine species.

This report forecasts revenue growth at the global, regional, and country levels and provides an analysis of the latest industry trends in each of the sub-segments from 2015 to 2025. For this study, Grand View Research has segmented the global ornamental fish market report based on product, application, and region: