The global osseointegration implants market size was estimated at USD 4.9 billion in 2017 and it is anticipated to exhibit a CAGR of 7.7% over the forecast period. Surge in geriatric population, alarming rise in road traffic accidents, and growing adoption of minimally invasive surgeries are among factors anticipated to drive the global market. 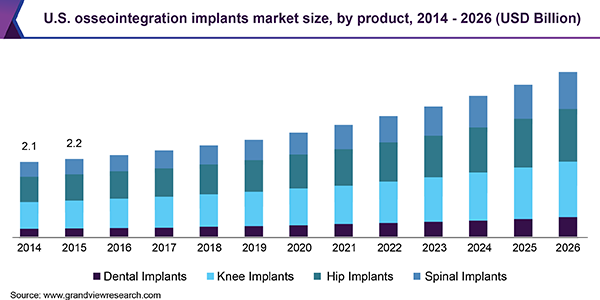 In developed economies, such as France, Germany, the U.S., and Australia, the market is comparatively mature owing to the strong presence of leading market players in these countries and high demand for such products. Contrary to this, the market in emerging countries in Asia and Latin America present strong growth opportunities as the adoption rate of these products is relatively moderate.

These markets are primarily fueled by rapid economic growth and increasing disposable income. A rising number of manufacturing companies have been investing in these rapidly developing markets and effective pricing and distribution strategies are being undertaken to capitalize on the opportunities present in these regions.

The market in emerging economies is also propelled by growing consumer awareness, rising medical tourism, and supportive government initiatives for the underserved population. In addition, there has been a surge in smoking and drinking habits, which has greatly contributed to disease prevalence. This will indirectly have a positive impact on product sales.

On the basis of product, the market is segmented into dental, knee, hip, and spinal implants. The knee implants segment held the dominant market share in terms of revenue in 2017. Growth in knee implants can be attributed to increasing prevalence of osteoarthritis and rheumatoid arthritis among geriatric population and rising cases of joint replacement surgeries. As per data published by the American Joint Replacement Registry in 2016, approximately 85.0% of osteoarthritis cases undergo knee replacement surgeries each year in North America alone.

The spinal implants segment is anticipated to gain significant traction over the forecast period and held over 20.0% of the total market in 2017. Rising incidence of obesity and degenerative spinal conditions are responsible for the growth of this segment. In 2015, around 288,500 people were living with spinal cord injuries in the U.S. alone. As per statistics published by the World Health Organization (WHO), in 2016 more than 1.9 billion adults were overweight and around 650 million people were obese. This can be attributed to sedentary lifestyle and unhealthy food habits.

Osseointegration implants are used in hospitals, ambulatory surgical centers (ASC), and dental clinics. The hospital segment accounted for the largest share in 2017, holding just over 55.0% of the global market that year. This dominant share is attributed to increase in hospitalization rate and growing awareness among individuals about joint replacement surgeries.

Dental clinics are expected to gain a significant share in the osseointegration implants market over the forecast period, owing to increase in demand for dental implants for tooth replacement surgeries and strong growth in cosmetic dentistry. Other factors contributing to segment growth include rising R&D expenses in dentistry and increasing usage of dental 3D printing by key players.

The global market was dominated by North America in 2017, which accounted for over half the overall revenue that year. This trend is anticipated to continue over the forecast period, with the region retaining its lead through 2025. Growth can be attributed to developed healthcare infrastructure, greater expenditure on healthcare, and higher awareness about minimally invasive surgeries. 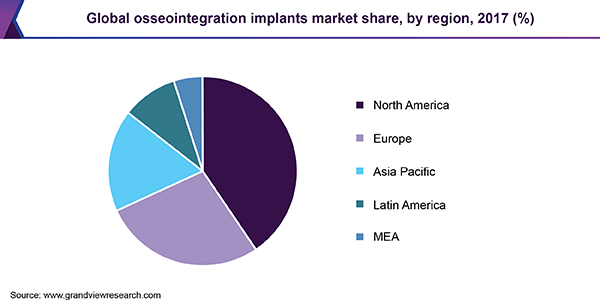 The Asia Pacific market is anticipated to witness the highest CAGR of over 8.0% over the forecast period. This growth can be attributed to the presence of a massive patient pool, coupled with high proportion of elderly population seeking treatment options through private hospitals or government sponsored schemes. Moreover, favorable government policies to transform healthcare practices in respective countries, particularly in rural belts, is anticipated to boost the Asia Pacific market.

Some of the key companies operating in this industry are Medtronic, Stryker Corporation, Zimmer Biomet Holdings, Smith and Nephew Plc., Straumann AG Group, Integrum SE, and ConMed Corporation. Various strategies such as mergers, acquisitions, collaborations, and new product launch are being adopted by these market players to maintain their position in the industry and gain a stronger foothold.

In April 2018, Integrum SE introduced a revolutionary OPRA implant system. The company has stated that the product will initially only be available in London and would be distributed through London International Patient Services (LIPS), a healthcare treatment organization for international patients seeking treatment based in the U.K.

This report forecasts revenue growth at global, regional, and country levels and provides an analysis of the latest industry trends from 2014 to 2026 in each of the sub-segments. For the purpose of this study, Grand View Research has segmented the global osseointegration implants market report on the basis of product, end use, and region:

How big is the osseointegration implants market?

What is the osseointegration implants market growth?

Which segment accounted for the largest osseointegration implants market share?

b. North America dominated the osseointegration implants market with a share of 54.3% in 2019. This is attributable to developed healthcare infrastructure, greater expenditure on healthcare, and higher awareness about minimally invasive surgeries.

Who are the key players in osseointegration implants market?

What are the factors driving the osseointegration implants market?

b. Key factors that are driving the market growth include rising geriatrics with musculoskeletal disorders, increasing incidences of injuries from road traffic accidents, and the adoption of minimally invasive surgeries.