The global paprika market size was valued at USD 432.7 million in 2018 and is projected to expand further at a CAGR of 5.3% over the forecast years. Paprika has excellent anti-inflammatory, anti-aging, anti-depression, and antioxidant properties. Paprika can also be useful in the treatment of cancer; while oleoresin can be used in nausea, dysentery, and arthritis treatments. Major applications include food & beverages, flavors, pharmaceuticals, and others. Other applications include meat canning, sauces, confectionery, perfumery, and as a base in various seasoning applications. Applications, such as perfumery, beverages, and pharmaceuticals, have witnessed considerable growth in the recent past and this trend is projected to continue shortly.

This growth can be attributed to factors, such as rising disposable income and high product demand in developing countries. Paprika mainly consists of volatile essential oils and non-volatile resinous fractions containing the flavor of the spice. In terms of flavor and food formulation, paprika can be used as a potential substitute for whole ground spices without changing the flavor. This paves the way for the product to be used in applications, such as meat canning, sauces, beverages, and bakery. The market is characterized by vertical integration across each component of the value chain. 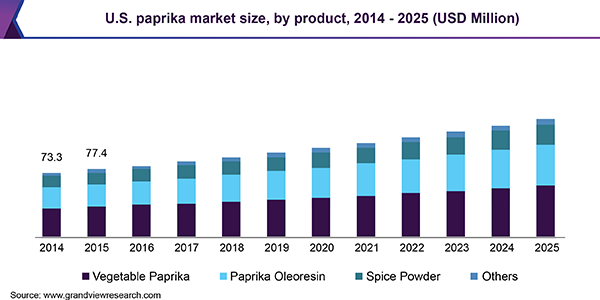 The value chain begins with raw material production. For instance, Paprika Oleo’s, which was established in 1992, manufactures and exports chilies and chili products. Presently, the company deals with a varied range of products, which include stemless chilies, crushed and ground chilies, capsicum, oleoresin, and pure capsaicin. Such a company produces whole spices and blended spices including red chilies and turmeric to specialize in extracting oleoresin.

In terms of raw material, paprika ground spices are made from dried red fruits of the sweeter and larger varieties of the plant Capsicum annum, called sweet pepper or bell pepper. These bell peppers are the members of a similar plant family, such as potatoes, eggplant, and tomatoes. According to the Agriculture Marketing Resource Center, U.S. intake of bell peppers in 2017 was around 11.4 pounds per person, a surge of 6% from 2015, and chili peppers averaged at 7.7 pounds per person in 2017, a surge from 8% in 2015.

The usage of vegetable paprika in both cream and plasters is presumed to boost the product demand in the coming years. Oleoresins capsicum has been gaining popularity as a pepper spray for a safe and effective method to avoid danger or threat from individuals. The strength of the oleoresin mostly depends on the grind before the oil is extracted. Demand for spice powder is likely to witness strong growth during the forecast period owing to rising income levels and altering food experiences, consumption patterns, demographics, and social factors.

Global production has also witnessed a massive shift in line with the consumption pattern, wherein, newer culinary experiences are one of the primary growth stimulants. Spice powders are considered to be functional foods. The rising demand for colorants coupled with natural spices has propelled the market growth across the world. Paprika oleoresins are extensively used in the food industry as natural flavoring, as well as in meat products, cheese, popcorn oil, and cheese food coatings. This product type, which includes both paprika and chili, is produced by solvent extraction of dried capsicum pods, which is eventually followed by solvent removal.

The product finds applications in several F&B applications including cheese, orange juice, spice mixtures, sauces, emulsified process meats, and sweets. They provide a specific color texture for food products. The products are used as seasoning material, especially in fast foods. They are also used to impart taste to cold drinks. They provide high stability making them suitable to be used in foods that are fried and cooked at high temperatures. 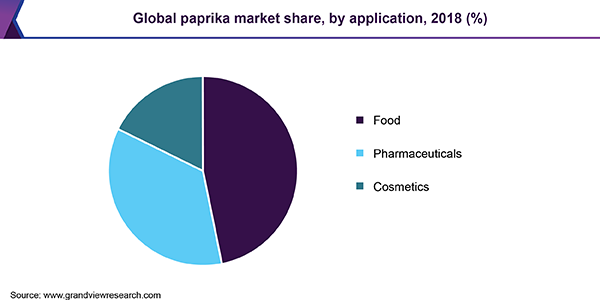 Paprika products find wide applications in pharmaceuticals as well. They can help reduce pain, anxiety, and stress when used in proper concentrations. They also have inherent properties, such as analgesic, anti-inflammatory, and anti-obesity properties. Paprika also has excellent anti-diabetic properties and helps in controlling type 2 diabetes. Chili paprika contains capsaicinoids, which have positive effects on cardiovascular and gastrointestinal systems.

Europe is considered as one of the leading regional markets followed by the Asia Pacific and North America. Strong demand for spice oils coupled with food coloring products is the key factor boosting the region’s growth. Furthermore, the rise in consumer disposable income, changing lifestyles, and increasing demand for convenience foods are likely to contribute to the market development in the region. Rising consumer disposable incomes, changing lifestyles, and increasing demand for convenience food are contributing to the development of the product market in the region.

Although Spain is the major producer in the region, most of the demand is fulfilled by imports from India. North America is projected to account for a significant market share over the forecast period on account of escalating demand for paprika that is used in seasoning, flavors, and fragrances in small amounts. Thus, a wide range of applications is expected to fuel regional market growth. Rapidly expanding pharmaceuticals and cosmetics industries in the region are also estimated to spur the product demand during the forecast period.

High entry barriers, owing to the difficulty in registration and heavy capital investments, are likely to maintain intense competition among the existing manufacturers. Major companies in the market are located in the U.S. and India. Some of the key companies include Synthite Industries Ltd., Chr. Hansen Holding A/S, Ungerer & Company Unilever Food Solutions, and Plant Lipids These companies focus on increasing their market share along with profitability through product and technological innovations.

They are also focusing on optimum business growth by implementing various strategies, such as forming strategic partnerships with regional players. Moreover, most of them have set up their distribution networks in developing economies of Central & South America and APAC owing to excellent growth potentials as a result of escalating product demand in these regions.

This report forecasts revenue and volume growth at global, regional, and country levels and provides an analysis of the latest industry trends in each of the sub-segments from 2014 to 2025. For this study, Grand View Research has segmented the global paprika market report based on product, application, and region: