The global pea starch market size was estimated at USD 54.6 million in 2018 and is projected to expand at a revenue-based CAGR of 5.8% during the forecast period. The growth is primarily stimulated by the increased consumer demand for pea fiber and protein, which in turn has resulted in a surplus of pea starch. The product is considered as one of the new starch-based ingredients in the feed and food industries. It offers many nutritional benefits and is useful for preparing lactose-free and gluten-free allergen-free solutions. Pea starch also helps provide clean labels for processed food products, such as baked goods and meat products owing to its organic origins. 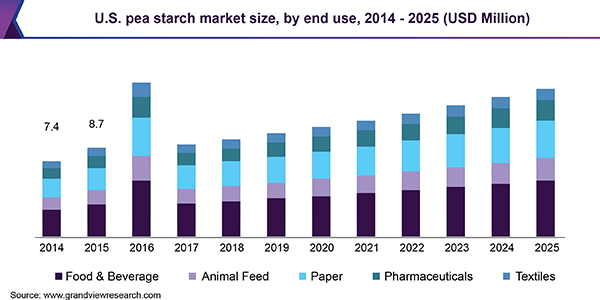 Peas are produced in almost all countries across the world. Canada is considered to be one of the largest manufacturers and exporters of field pea. Over half of the total Canadian production of peas is exported in the form of seed without further processing.

In North America and Europe, field peas are majorly used in the feed industry, through which whole seeds are grounded and blended with ground cereal seeds to harvest feeds. In South America and Asia, field peas are significantly used for human consumption. The proportion of global field pea production, which is processed into starch, fiber, and protein fractions is very less at present.

Pea starch is attained from yellow peas, that is the most common ingredient derived from field peas, and comprises of over 40.0% starch that appears in the form of white powder. It is also used as a thickening agent in numerous agri-food applications, such as delicatessen, sauces, creams, meats, and kinds of pasta.

Based on type, the pea starch market can be segmented into food, feed, and industrial. Food grade segment is projected to grow significantly over the forecast period, due to the higher suitability of the product as an ingredient for human consumption. The product also provides stability during the processing of food products.

Recent expansions in the cosmetics industry coupled with the increasing popularity of starch-based adhesives in the packaging business will augment the segment growth soon. Additionally, pea starch is an outstanding source of bio-plastic as the material is renewable and can biodegrade safely under the proper conditions.

Based on function, the market is segmented into gelling, texturizing, binding and thickening, film-forming, and others. The gelling function led the overall market in 2018, owing to the wide usage of the product in various food products as well as animal feed, owing to the high accessibility of amylose.

Pea starch as a gelling agent intensifies the viscosity of a liquid without significantly changing its other properties. It is extensively consumed in the food and beverage industry, especially in sauces, puddings, gravies, and soups without altering the taste on account of its comprising fibrous content and gluten-free properties.

Pea starch is considered to be gluten-free as well as non-GMO. It is different from other native starches as it has high amylose content. It can also form a gel in the water at a much lower dosage than other variants. It is considered to be an ideal ingredient for food products that require less elastic texture for gums, meats, extruded cereals, coatings, and others.

Based on the application, the market is segmented into food and beverage, animal feed, paper, pharmaceuticals, and textiles segments. The food and beverage application is expected to dominate the market during the forecast period, on account of the vast usage of pea starch in snack products. The product acts as a fat replacement ingredient in convenience foods and nutritional food. It also comprises of significant sources of fiber and protein in these consumables. 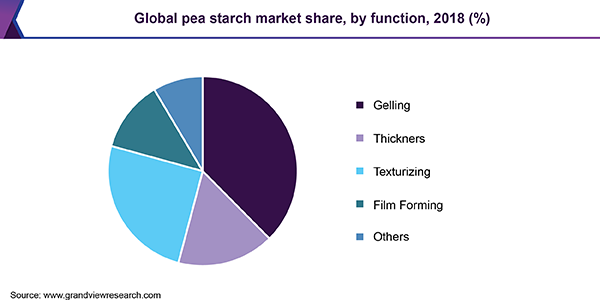 Increasing demand for convenience and processed food products across the globe, especially in the Asia Pacific is anticipated to increase pea starch consumption in the food and beverage industry over the forecast period. Expanding paper and pharmaceutical industries are also contributing to high growth in this region. The product finds significant application in the papermaking industry, wherein it is used as an additive for improving drainage and retention, in addition to improving the formation properties of paper. The product is also used for surface treatment applications in the paper industry.

Asia Pacific held a considerable market share in 2018 and is projected to expand at the fastest CAGR over the forecast period. The region has contributed considerably to the growing demand for convenience foods, such as confectionery, sauces, and soups. Factors such as increasing usage of pea starches in processed food preparation, a huge consumer base, and growing demand for native starches, are expected to be the major contributors to the regional market growth.

North America is estimated to account for the largest market share by 2025 on account of being the largest manufacturer and exporter of pea starch across the globe. The region is also expected to remain a major consumer in the market owing to the increasing consumption of processed food and the growing demand for adhesives in a broad range of industrial applications.

A considerable rise in output of the food processing sector in Mexico, mainly on account of the increasing number of imports for machinery, is expected to drive the growth of the baked goods and processed meats industry segments, thereby resulting in a robust demand for pea starch as texturizing agents in baked goods and meat products over the forecast period.

The market is extremely aggressive with companies undertaking some activities including strategic alliances, capital extension, regular mergers, and acquisitions. Major players are concentrating on expanding their total market share coupled with productivity through technological innovation.

Key companies operating in the market include Cargill Inc.; Roquette; Emsland Group; American Key Products; Sanstar Bio-Polymers; Vestkorn; and Parrheim Foods. The presence of several market players has led to intense competition. To withstand this, vendors have been capitalizing primarily on the benefits of mergers and acquisitions.

This report forecasts revenue and volume growth at global, regional, and country levels and provides an analysis of the latest industry trends in each of the sub-segments from 2014 to 2025. For this study, Grand View Research has segmented the global pea starch market report based on type, function, end-use, and region:

How big is the pea starch market?

What is the pea starch market growth?

Which segment accounted for the largest pea starch market share?

b. North America dominated the pea starch market with a share of 40.5% in 2019. This is attributable to increasing consumption of processed food and growing demand for adhesives in broad range of industrial applications.

Who are the key players in pea starch market?

What are the factors driving the pea starch market?

b. Key factors that are driving the market growth include its nutritional benefits and its use in preparing lactose-free and gluten-free allergen-free solutions.