The global pectin market size to be valued at USD 1.9 billion by 2025 and is expected to grow at a compound annual growth rate (CAGR) of 7.1% during the forecast period. Increasing health concerns and growing usages of healthy & organic raw materials for producing edible products are expected to drive the market in the foreseeable period. Pectin is a plant-derived soluble fiber compound, found in the plants cell walls. It is mainly extracted from citrus fruits, apples, apricots, cherries, oranges, and carrots. However, the major raw material used for the production of industrial product is apple and dried citrus peel which is available in white and light brown powder commercially. 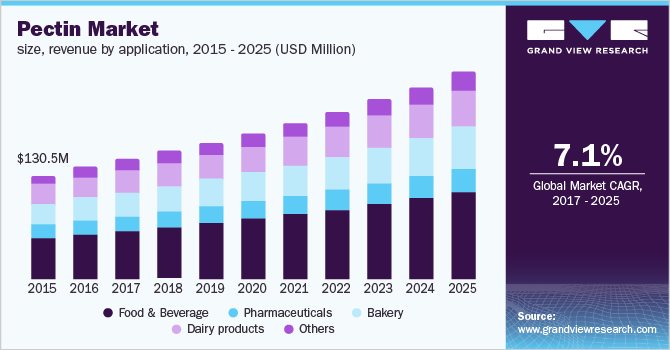 Pectin is used as a gelling & thickening agent and stabilizer in a broad range of fruit products, such as marmalades, fruit-based preparations for yogurts & desserts, and bakery products. It is also used in confectionery such as jam & jellies to give them a gel structure. Major advantages of adding it to food and other products are it reduces cooking time, improves texture & color, and increases the shelf life. It is also widely used in pharmaceuticals industry for wound healing preparations and specialty medical adhesives.

Pectin is considered a safe food substance through various government food agencies. Its usage and composition are regulated under different food additive laws. Under the European Union, pectin and amidated pectin (a modified form of it) both have given an Acceptable daily intake (ADI) by the Scientific Committee for Food. In Japan, the Ministry of Health, Labor, and Welfare have recognized it as safe under the Japan's Specifications and Standards for Food Additives. In the U.S., the Food and Drug Administration (FDA) recognize it as GRAS (generally recognized as safe).

Deriving pectin from its raw materials is a complex process. Companies present in the pectin market are involved in developing new technology for extracting it from its sources. These technologies can help to generate it and other valuable food ingredients for drinks and food processing waste. One such technology is microwave-based technology.

The modified microwave technology breaks waste orange and lime peel into a wide range of products, which are valuable for various end-use industries. The technology utilizes a huge microwave oven to remove chemicals from the materials during recycling. The oven usually works at or below 200 degrees, which is enough to transform the waste into useful substances.

The primary factor driving the growth of the market is the increase in the global consumption of luxury food and beverage goods. Increased use of pectin in juice for enhanced mouthfeel, acidified dairy applications for limited jams, oxidized protein drinks, protein stabilization, and increased awareness of pectin's multi-functionality among food and beverage manufacturers contribute to market growth.

The market is expected to grow as expanding population and middle-class income. Recent improvements in the supply chain and urbanization also significantly impacted the market. The demand for pectin powder is expected to grow due to an increase in the consumption of functional foods due to people's hectic lifestyles.

Price variations in pectin and related products, strict regulations, and the need for quality standards are projected to rigorous industry growth. The development of pectin alternatives and confusing labeling that causes ambiguity and uncertainty are expected to restrict the pectin market over the forecast period.

The rising usage of the packed product to reduce cooking time, improve shelf-life, and improve texture and color, as well as the multi-functionality of pectins, which leads to demand from newer applications, all have an impact on the market. Furthermore, higher R&D investments present market participants with profitable opportunities during the forecast period.

Thickener functional segment accounted for over 35% of the market in 2015. The segment is expected to show a similar growth trend over the forecast period. The wide use of pectin as a thickener in various food products is due to its chemical and physical properties. It has the ability to form cross-linked polymer networks that are highly hydrated.

Thickener functional segment market is followed by gelling agent segment. The segment is anticipated to grow at a CAGR of 7.2% from 2016 to 2015. Pectin is also used in cooking which is divided into two categories, high-methoxyl (HM) and low-methoxyl (LM). One requires the presence of sugar and certain amount of acid and the latter requires the presence of calcium to generate the process of gelling.

Food & Beverage application was the major application sector, which accounted for over 40% of the overall market in 2015. It is used in confectionery, and fruit applications (such as jams, jellies, and desserts). The pectin application is expected to show a similar trend over the forecast period. The market is expected to grow at a CAGR of 7.5% from 2016 to 2015.

The demand for pectin in pharmaceuticals and cosmetics products is also growing significantly. It is used to create textures from gels to structured fluids. By using different raw materials and manufacturing conditions, it is also used as film-forming and water-binding agents.

Europe is a mature market, followed by North America. The demand in the region is high owing to the presence and growth of end-use application for the product. The region accounted for over 32% of the global market in 2015. 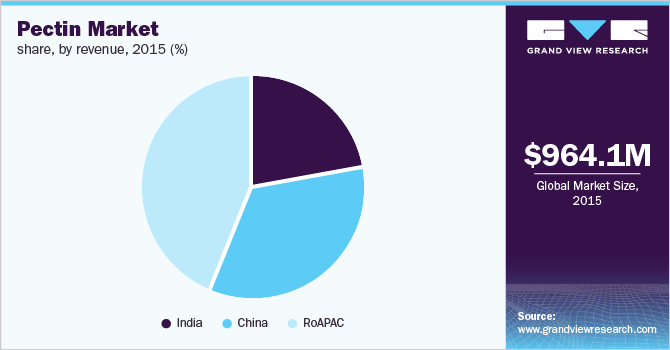 Brazil is one of the largest producers of pectin, followed by Denmark and Mexico. Argentina is also a key country for growth of citrus fruits. However, there is no major production capability in the nation owing to unfavorable weather patterns and decreasing demand for lime juice. This has resulted in reducing plantation of lime trees. Asia Pacific is a potential market owing to the presence of emerging countries such as Chain and India. Changing lifestyle and food preference in these countries is expected to boost the market in the region. 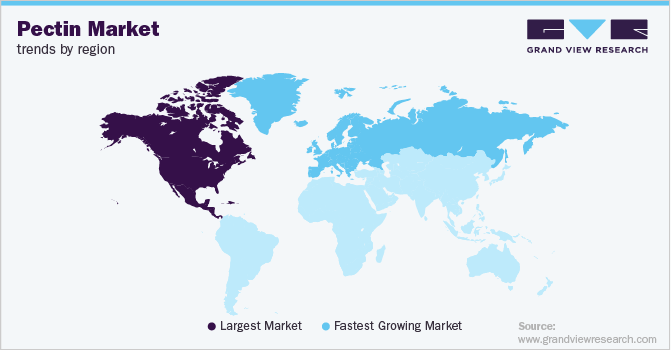 The market is mature, and fragmented, with no outright market leader. Market players are focusing on developing new technologies to achieve product differentiation. The experienced, as well as small-scale regional players, are investing in research & development activities and trying to develop new and better product for the end-user industries to gain market share.

This report forecasts revenue growth and provides an analysis on the latest trends in each of the sub-segments from 2014 to 2025. For the purpose of this report, Grand View Research has segmented the global pectin market on the basis function, application, and region: 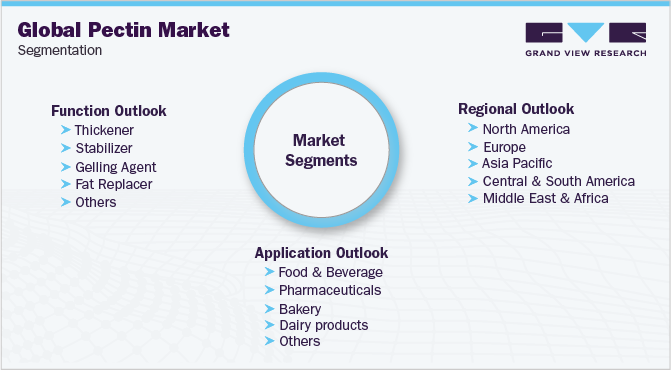