The global phosphoric acid market size was valued at USD 45.85 billion in 2019 and is expected to register a compound annual growth rate (CAGR) of 3.7% from 2020 to 2027. High usage of phosphoric acid for the production of phosphate fertilizers, such as Mono-Ammonium Phosphate (MAP) and Diammonium Phosphate (DAP), is expected to drive the market over the forecast period. Globally, phosphoric acid is the second-largest consumed inorganic acid after sulfuric acid. It is industrially produced in three grades with different concentration levels as per its end use. The three grades include food grade, agriculture grade, and industrial grade. Agriculture grade phosphoric acid leads the global market, in terms of value as well as volume, owing to its high usage in the manufacturing of fertilizers. 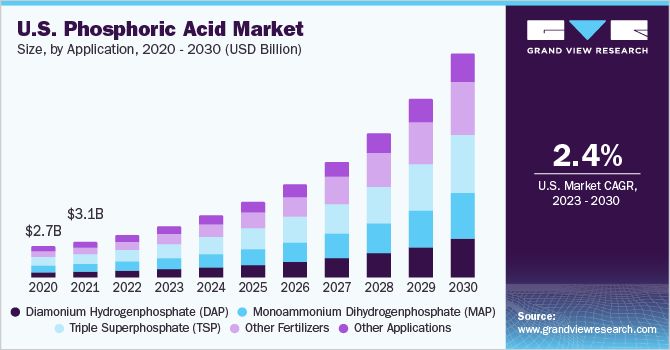 The rapid growth in agricultural output in China and the economic progress of the country has propelled the demand for phosphate fertilizers. This, in turn, has resulted in a rise in the domestic production and consumption of the product in the nation. However, owing to stringent government regulations, the production is anticipated to register moderate growth rate over the forecast period. On the contrary, in India, the chemical is anticipated to register significant growth, both in terms of production as well as consumption. Moreover, an increase in agricultural activities and the growing exports of fertilizers are expected to have a positive impact on production.

The constant ongoing debate over food safety with respect to crop yield and efficient cultivation of crops also has a positive impact on the market. However, problems arising due to the over usage of phosphate and nitrogen-based synthetic products have led to the development of sustainable options, such as micronutrients and organic chemicals. Development of such bio-based products has ushered in a greater emphasis on their competitiveness against conventional fertilizers available in the market today. This, in turn, will have a negative influence on market growth.

The product demand in the developed countries of North America and Asia Pacific has reached a maturity phase, generating a moderate growth for the chemical. However, increasing agricultural activities and favorable government regulations in the developing countries of Asia Pacific, Latin America, and the Middle East & Africa have fostered the production and demand for phosphoric acid.

Furthermore, the projected average global economic growth of 3.52% annually is likely to lead to a significant reduction and elimination of poverty in developing countries by 2050, and at the same time per capita incomes are projected to grow significantly. Currently, Asia Pacific dominates the agricultural industry and has a maximum consumption of fertilizers. This is mainly owing to the availability of fertile lands, huge population, suitable weather conditions, and large exports from developing countries.

Growing population has also led to a decline in arable land and hence there is a requirement for quick growing chemicals. This is one of the prime reasons triggering the usage of synthetic chemicals over natural or bio-based ones. The U.S. is one of the dominant agrochemical industries of North America and is home to different fertilizer manufacturing companies.

In terms of volume, DAPled the market with a share of over 35% in 2019. This high share is attributable to increasing demand for DAP fertilizers from the agricultural industry worldwide. China is the leading manufacturer in the world followed by the U.S., Russia, Brazil, and Morocco. It comprises of high nutrient value and has therefore been a popular choice among the farming community worldwide. On an average, DAP production of 1 ton requires 0.4 tons of sulfur to dissolve 1.5 to 2 tons of phosphate rock, and around 0.2 tons of ammonia.

From pricing standpoint of DAP, it largely depends on the fluctuation in price and availability of these feedstocks, coupled with transportation charges and handling & storage costing. The Monoammonium Dihydrogenphosphate (MAP) segment is projected to register the fastest CAGR from 2020 to 2027. China is the largest MAP consuming country. The largest MAP exporting countries are Morocco, China, Russia, and the U.S.; while the largest importing countries include Brazil followed by U.S., Canada, and Australia due to their growing agricultural activities over the past two decades.

The fastest growth of mono ammonium phosphate is attributed to its constituents (nitrogen & phosphorus), which are highly essential components. Due to the water solubility properties, the product mixes readily in moist soil, and universally the product is applied under the surface of the soil in the proximity of plant roots to attain optimum efficiency in terms of plant growth. Apart from the product’s application as a fertilizer, it is also commonly utilized in formulating fire extinguishers, which are widely utilized across all institutions globally as fire prevention safety protocol.

Asia Pacific was the largest market in 2019 and accounted for a global share of over 48%. The region is estimated to retain its dominant position throughout the forecast years owing to high phosphate rock reserves in China, which is also a major producer of phosphoric acid. The country also has a high production of phosphate fertilizers and yellow phosphorus. However, in recent years the country has witnessed a decline in the product demand owing to the stringent regulations on the usage of phosphate fertilizers. 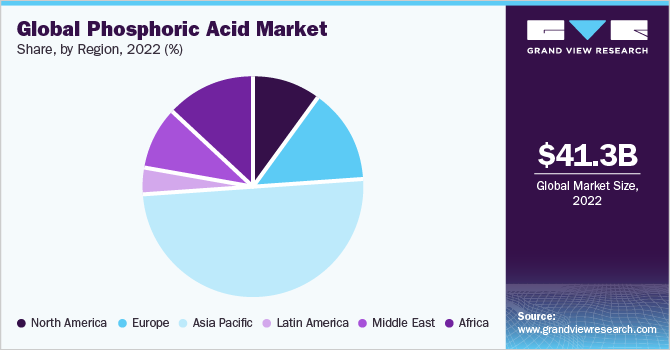 Aditya Birla Grasun Chemicals Limited (ABGCL) is the leading manufacturer of food-grade phosphoric acid, which is broadly manufactured by the thermal process. The changing lifestyle and economic growth are anticipated to drive the market for packaged food and bakery products, benefiting the food-grade phosphoric acid demand. However, the current chemical industry in China is under high scrutiny from the regional government to protect environmental degradation as well as due to the recent COVID-19 outbreak.

Such factors have resulted in the shutdown of some chemical manufacturing plants, such as the discontinuation of the phosphoric acid plants in Sichuan Province as well as across all major chemical manufacturing sites in the country for the first quarter of 2020. Furthermore, in terms of volume, APAC and African countries are anticipated to reflect substantial growth due to increasing food demand. South Africa is one of the key markets for the product in the Africa region, as the country is observed to face turbulence in crop production due to fluctuating weather conditions.

About 14% of total South African territory receives sufficient rainfall to suffice crop growth, and subsequently, only 10% or less of this land is utilized for farming practices. However, even though the cultivable land availability in the country is low, the overall agriculture output annually meets the local food demand due to the extensive use of synthetic fertilizers and other chemically-derived crop care products.

The global industry is concentrated on the presence of multiple million-dollar companies. There are multiple mergers & acquisitions, joint ventures and other alliances formed globally in the industry by most of these companies. For Instance, The Mosaic Group was formed in 2004 through the merger of Cargill's crop nutrition fertilizer businesses and IMC Global Inc. Also, Nutrien, another multinational fertilizer manufacturer, was formed as a merger between Agrium and Potash Corp. of Saskatchewan in 2017. The constantly evolving industry has led to several other such strategic initiatives undertaken by key producers to increase their market share. Some of the prominent players in the global phosphoric acid market include:

This report forecasts revenue growth at a global, regional, and country levels and provides an analysis of the latest industry trends in each of the sub-segments from 2016 to 2027. For the purpose of this study, Grand View Research has segmented the global phosphoric acid market report on the basis of application and region:

How big is the phosphoric acid market?

What is the phosphoric acid market growth?

Which segment accounted for the largest phosphoric acid market share?

b. Asia Pacific was the largest market for phosphoric acid with a global share of 48.8% in 2019. This is attributable to high phosphate rock reserves in China, which is also a major producer of phosphoric acid.

Who are the key players in phosphoric acid market?

What are the factors driving the phosphoric acid market?