The global photoacoustic imaging market size was valued at USD 61.6 million in 2020 and is anticipated to grow at a compound annual growth rate (CAGR) of 19% over the forecast period. The increasing incidence of cancer, primarily breast cancer, and rising research studies in the fields of non-ionizing radiation for imaging are boosting the market growth. For instance, according to the WHO, in 2020, there were about 2.3 million women diagnosed with breast cancer and 685,000 deaths worldwide. In addition, the growing scope of applications is equally contributing to the market expansion. Photoacoustic Imaging (PAI) is superior to other diagnostic imaging systems as it uses non-ionizing radiation to examine tissues in real-time with high resolution and contrast, at long penetration depths, and allowing morphological, functional, and molecular imaging of living subjects. 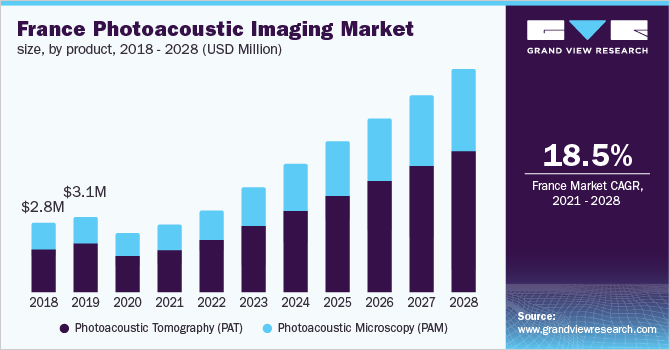 Also, it has faster imaging speed and sensitivity, as well as better handling and diagnostic accuracy. One of the major advantages of PAI is that it can be simply implemented on clinical ultrasound machines, allowing cellular and molecular imaging to be added to the spectrum of traditional ultrasound imaging. However, constraints, such as the high cost of these systems, limited bandwidth causing an inability to detect signals outside of the sensor's frequency range, acquisition time, and the limitations set by ANSI laser safety regulations, may hinder the market growth over the projected period.

The growing application in research and development activities is expected to increase product demand over the forecast period. Many researchers have recently concentrated their efforts on studying deep tissues to utilize PAI in clinical diagnosis and treatment. For instance, Prof. Chulhong Kim of Creative IT Engineering from POSTECH and his students presented a new contrast agent for deep tissue PAI. As a contrast agent, they used a nickel-based nanoparticle that absorbs light at a wavelength of 1,064 nm. In comparison to previous studies, they obtained images of tissues penetrated to a maximum depth of 3.4 cm in live animals, which is the deepest image obtained using this wavelength.

Photoacoustic imaging has been extensively used in preclinical studies, particularly on cancer models, and has allowed for a reduction in the number of animals sacrificed over time. The healthcare system had faced enormous difficulties as a result of the COVID-19 pandemic. The global healthcare supply chain had been impacted by the pandemic. Shortages of raw materials resulted in a drop in imaging device manufacturing, as well as disruptions in transportation, creating widespread business disruption. However, the market is gradually growing gas lockdown restrictions have been lifted across the globe.

The Photoacoustic Tomography (PAT) segment dominated the market with the largest revenue share of 63.5% in 2020. The segment is expected to continue its dominance over the forecast period. PAT is the most generic and least restrictive photoacoustic imaging technique, with the fewest practical limits on imaging performance. The PAT technique has been rapidly advancing in terms of spatial resolution, frame rates, and detection sensitivity. PAT’s uses in basic biological sciences have substantially grown, and several clinical applications have been proposed. Furthermore, with its unique combination of optical absorption contrast and ultrasonic imaging depth and resolution scalability, PAT is expected to have more efficient applications in biomedical research and clinical practice.

The oncology segment dominated the market with the largest revenue share of 53% in 2020 and is expected to continue its dominance over the forecast period. In oncology, breast cancer imaging is a potentially significant clinical application for PAI. Breast imaging is the most advanced PAI technique, in terms of clinical use, with benefits, such as non-contrast imaging of the neovasculature around a tumor and oxygen saturation mapping.

PAI, as compared to x-ray imaging, can detect tumors in radiologically dense breasts without causing painful breast compression. For instance, The National Institute of Technology (NIT) of Andhra Pradesh (NIT-AP) and Pennsylvania State University (PSU) in the United States announced their collaboration to develop an Artificial Intelligence (AI)-augmented PAI technique for cancer diagnostics. In recent years, this technique has gained popularity by allowing precise and early-stage identification of cancer, neurological problems, and vascular disorders.

The pre-clinical segment accounted for the largest revenue share of around 81% in 2020. PAI is an efficient non-invasive, non-ionizing tool used in pre-clinical studies for the characterization of small animals, such as mice or rats, without harming them. Characterization of small-animal models of brain damage and disease processes, especially those requiring the study of vascular anatomy and function, such as stroke, epilepsy, and traumatic brain injury, are possible. The widespread use of PAI in the research platform to investigate human disease processes and to develop new therapies is expected to promote market growth. 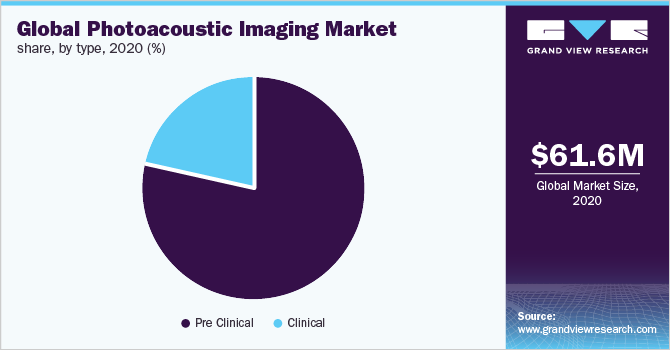 The clinical segment is anticipated to witness the fastest CAGR over the forecast period due to the growing scope of applications in clinical studies.  The PAI modality can be used in diagnostic imaging using endogenous contrast between different tissues; also, it is well-suited for visualizing foreign objects, such as stents, needles, as the metals or composite materials are a high absorption coefficient. The rate of advancement toward clinical application in oncology, dermatology, cardiovascular medicine, and other specialties is anticipated to accelerate the market growth.

North America dominated the market and accounted for the largest revenue share of 42.8% in 2020. Over the forecast period, the region is expected to grow at a significant rate. The existence of a large number of market competitors in the region, as well as the increasing number of cancer cases, both seem to be factors contributing to regional market growth. For instance, as per the National Cancer Institute, in the United States, an estimated 1,806,590 new cases of cancer will be diagnosed in 2020. In addition, improved funding has boosted the region’s research activities. The United States spends the most per capita on healthcare and has the largest funds and grants available for research through government agencies, such as the National Institutes of Health (NIH).

In the Asia Pacific, the market for PAI is estimated to witness the fastest CAGR during the forecast period owing to the increased demand for better imaging devices and the rising frequency of research activities. For instance, In September 2021, a group of researchers from South Korea’s Pohang University of Science and Technology (POSTECH) developed a handheld photoacoustic detector that can be used to assess lymph node status without exposing patients to radiation.

The key players are working to improve their offerings by upgrading their products, leveraging important cooperative drives, as well as considering acquisitions and government approvals to increase their client base and gain a larger share of the global industry. For instance, in October 2020, Advantest Corp. developed a dual-wavelength laser for the company’s HadatomoZ photoacoustic microscope. This enables 3D imaging of melanin and vascular networks in the skin. The following are some of the major participants in the global photoacoustic imaging market:

This report forecasts revenue growth at global, regional, and country levels and provides an analysis of the latest industry trends in each of the sub-segments from 2016 to 2028. For the purpose of this study, Grand View Research has segmented the global photoacoustic imaging market report on the basis of product, type, application, and region:

How big is the photoacoustic imaging market?

b. The global photoacoustic imaging market size was estimated at USD 61.6 million in 2020 and is expected to reach USD 69.8 million in 2021.

What is the photoacoustic imaging market growth?

Which segment accounted for the largest region market share?

b. North America dominated the photoacoustic imaging market with a share of 42.8% in 2020. This is attributable to the rising existence of a large number of market competitors in the region, as well as the increasing number of cancer cases.

Who are the key players in photoacoustic imaging market?

What are the factors driving the photoacoustic imaging market?

b. Key factors that are driving the photoacoustic imaging market growth include the increasing incidence of cancer, a rise in research studies in the field of non-ionizing radiation, and a wide range of applications.