The global physical vapor deposition on plastics market size was valued at USD 6,785.9 million in 2018 and is expected to grow at a CAGR of 6.2% over the forecast period. Ascending demand of plastic products with Physical Vapor Deposition (PVD) from key applications including microelectronics, data storage, and solar products, particularly in the BRICS (Brazil, Russia, India, China, and South Africa) countries, is likely to drive physical vapor deposition (PVD) on the plastic market over the forecast period. 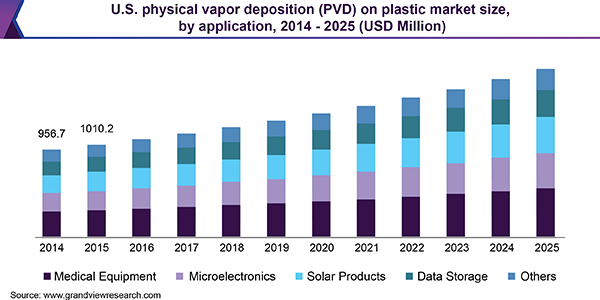 Over the last few years, technological development has helped to reduce the energy consumption by PVD equipment in regions such as North America and Asia Pacific that witness high technological growth. This, along with generating a consistent demand for physical vapor deposition (PVD) on plastic, also helps reduce the overall cost of film deposition on plastic products.

Rapid technological development of PVD equipment has been posing a threat to large multinational corporations operating in the global market, with the former offering low-cost technologies, thereby creating a gap in the prices in the global market. Government support in the form of tax benefits and financial incentives in China and India to increase the FDI inflow has helped develop the market for physical vapor deposition (PVD) on plastic in these countries. 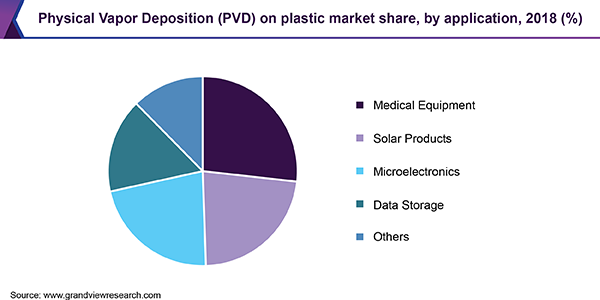 Rising demand for photovoltaic cells and emphasis on renewable energy production in Asia Pacific, especially in countries including China, India, and Japan, is expected to propel the demand for physical vapor deposition (PVD) on plastics for solar products in the region.

In addition, factors including dropping prices of solar photovoltaic cells globally, growing concerns regarding the pollution in China, global renewable energy shift from Europe to Asia, policies promoting renewable energy generation, and a shift from public to private power purchase agreements are expected to propel the generation of solar electricity in the region.

Innovation, price deflation, and rising household incomes especially in emerging markets of Asia Pacific have resulted in high demand for physical vapor deposition (PVD) on plastics products in various applications in the region. Developing economies such as India, South Korea, Japan, and China are expected to witness strong economic growth over the coming years.

With increasing electricity consumption in Asian countries, especially in China and India, renewable energy, mainly solar energy, in the Asian energy mix is gaining prominence as an alternative to coal for electricity generation. The region has average solar radiation of 18.5 MJ/m2/day, with a current solar power generation capacity of 20 GW.

Important factors for the growth of power generation from renewable sources in the region are reducing the carbon footprint, and supportive government regulations & incentives to minimize risk, facilitate healthy sales competition based on per unit price of electricity, and subsidies for new and large-scale solar projects. Large-scale solar projects use state-of-the-art technologies resulting in power generation at a competitive price.

Most of the key players operating in the Physical Vapor Deposition (PVD) on Plastic market have integrated their equipment manufacturing and distribution operations to maintain equipment quality and expand regional reach. This provides companies a competitive advantage in the form of cost benefits thus increasing the profit margin. Companies are undertaking research & development activities to develop new technology to sustain market competition and changing application requirements.

This report forecasts revenue growth at global, regional & country levels and provides an analysis of the industry trends in each of the sub-segments from 2014 to 2025. For the purpose of this study, Grand View Research has segmented the Physical Vapor Deposition on Plastics market report on the basis of application and region: