The global physiotherapy equipment market size was valued at USD 19.1 billion in 2021. It is expected to expand a compound annual growth rate (CAGR) of around 6.69% from 2022 to 2030. Increasing cases of road accidents and injuries and the rising number of rehabilitation centers are expected to drive the demand for physiotherapy devices.

Improper eating habits and a stressful lifestyle that result in discomfort in the ligaments, nerves, muscles, back, and neck, as well as a growing prevalence of stroke and Parkinson's disease, are expected to fuel the market. Due to the added benefits of physical therapy, physicians have begun prescribing it to patients, which has resulted in an increase in demand for physical therapy equipment. 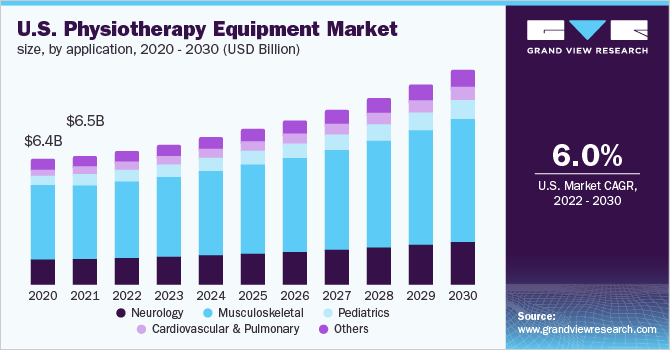 Physiotherapy, alternatively referred to as physical therapy, is a type of treatment used to improve and restore appropriate body function. It utilizes a variety of technology and methods to help patients maintain their health and recover quickly from medical issues. These treatments are usually longer in duration and are performed in outpatient clinics. On the other hand, inpatient rehabilitation treatments are often reserved for patients who are being observed following surgery.

An aging population and the increasing prevalence of cardiovascular, neurological, and musculoskeletal diseases are likely to propel market growth, not only in established economies but also in emerging economies such as India and China. According to the WHO's National Institute on Aging, the incidence of dementia and neurodegenerative illnesses is anticipated to increase significantly (by 25%–30%). Dementia eventually results in the impairment of thinking and speech-motor abilities. The majority of these patients eventually require continual care, monitoring, and assistance, which can be decreased by the use of physiotherapy equipment.

Asia and Europe have the world’s highest proportion of the elderly population and are estimated to remain the same for at least the next 50 years. Many countries are working either individually or in collaboration to address age-related cost & care challenges and prevent & control chronic diseases. Chronic diseases such as asthma, diabetes, COPD, and arthritis are the leading causes of mortality globally and represent 63% of all deaths. Cardiovascular diseases and diabetes are extremely prevalent in the Middle East & Africa as well as Asia. In general, the older population has a greater risk of developing disabilities as compared to others. With the increase in the geriatric population, the demand for rehabilitation and physical therapy is expected to grow rapidly in the coming years.

The International Osteoporosis Foundation predicted in 2019 that by 2025, Europe's population with osteoporosis might reach 33.9 million, up 23% from 26.5 million in 2010. Additionally, the study indicated that by 2050, Asia is expected to account for more than half of all osteoporotic hip fractures. Thus, as orthopedic diseases become more prevalent, demand for rehabilitation treatments increases. Additionally, neurological disorders account for a sizable portion of global morbidity and mortality, with stroke being the leading cause of death.

The cardiovascular and pulmonary segment is expected to witness substantial growth over the forecast period due to the rising adoption of physical therapy services in developing nations such as China, India, Brazil, etc. The premature death rate due to CVD in high-income countries is 4% in comparison with 42% in low-income countries. Physical therapies are beneficial for patients with pulmonary fibrosis, heart valve replacement, post-coronary bypass surgery, and coronary stent placement.

The incidence of cardiovascular and pulmonary diseases has increased considerably, resulting in a major cost burden in most countries worldwide. CVDs are the leading cause of death worldwide. Furthermore, about 90 million U.S. adults were diagnosed with CVDs in 2017, according to the American Heart Association. Physical inactivity and an unhealthy lifestyle are the leading causes of CVD. Thus, the rapid adoption of sedentary lifestyles is propelling the segment's growth.

Based on type, the ultrasound segment dominated the physiotherapy equipment market with a share of 41.7% in 2021 and is expected to register a high CAGR during the forecast period. Ultrasound therapy speeds up the healing process by reducing swelling and edema. The regulatory approval and launch of innovative products by manufacturers is contributing to the segment growth. For instance, in December 2016, BTL received FDA clearance for its BTL-4000 Smart and Premium line used in the treatment of musculoskeletal disorders.

The thermoelectric stimulation segment accounted for the second-largest market share in 2021. Electrical stimulation therapy is mainly used for the rehabilitation of neurological disorders such as stroke, cerebral palsy, multiple sclerosis, and Parkinson’s disease. Functional electrical stimulators are manufactured by companies such as Ottobock, Bioness, and WalkAide. The rising prevalence of pain and neurological disorders is expected to fuel the segment growth.

Based on demography, the market is segmented into the geriatric and non-geriatric populations. The non-geriatric patient population accounted for a major portion of the market in 2021. An increase in hospital stays and visits is anticipated to positively influence the segment growth over the forecast period.

Non-geriatric patients requiring hospital care majorly include adults with spinal cord and domestic or accidental injuries due to motor or workplace mishaps. According to WHO, accidents are the largest contributor to spinal cord injury cases worldwide. Domestic and workplace mishaps are the second-largest contributors to the rise in non-geriatric inpatient treatment. About 34% of individuals suffer from domestic mishaps and 45% from road accidents in the U.K., which is expected to propel the growth of the market.

According to the 2017 World Population Prospects data, the population aged 60 years or above is expected to rise more than two times by 2050 and to more than three times by 2100, increasing from 962 million in 2017 globally to 2.1 billion in 2050. Rapidly rise in aging populations is anticipated to boost the geriatric population segment.

The hospitals & clinics segment held the largest market share pertaining to a large patient pool and implementation of various programs by hospitals. Additionally, due to the high cost of physiotherapy instruments, the majority of patients choose to have the treatments performed in multispecialty hospitals or specialized clinics.

Hospitals and clinics are expanding their medical facilities to specialized units that focus on physical therapy or another alternative treatment regimen for patients post-trauma or surgery. For instance, in October 2018, Rani Chandramani Devi Government Hospital in India drafted a proposal to set up a physiotherapy center due to the rising need for community rehabilitation. In the U.K., Physiokinetic partnered with the Performance Centre of the University of Birmingham Sport & Fitness to offer specialized physiotherapy services for all types of injuries. This is expected to boost the segment growth.

The others segment is expected to register the fastest growth in the forecast period. Other end-users include community centers, sports centers, convalescent homes, and schools & sports academies. Changing demographics globally, the rising trend of an active lifestyle, and the uptake of sports as a profession by individuals are expected to propel the market growth during the forecast period. Availability of physiotherapists and equipment in such institutes is mandatory according to the regulatory bodies for safeguarding the well-being of participants, thereby promoting market growth.

North America dominated the global market with a share of 38.5% owing to rising cases of accidents and mishaps, growing incidence of osteoporosis, and an increasing geriatric population. The presence of numerous hospitals and home care providers for convalescent individuals is further boosting the market growth. The demand for physiotherapy is also anticipated to increase due to the growing incidence of chronic illnesses such as Parkinsonism, stroke, paralysis, and spinal injuries. As per a 2017 survey conducted in the United States by the National Centre for Health Statistics, pain from any muscle, joint, or bone was reported by 52.1% among people aged 18 years and older, and lower back pain was the most common, affecting 28.6% of the people. 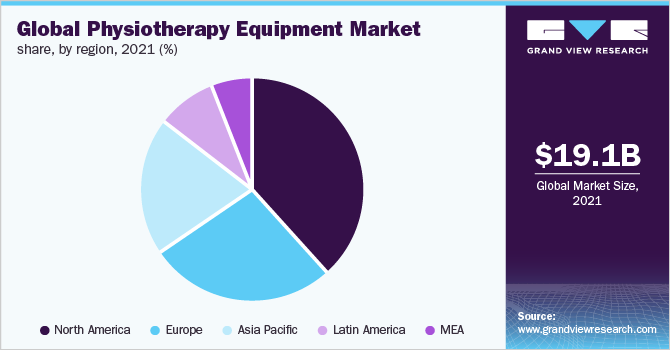 The Asia Pacific is expected to witness a remarkable growth rate over the forecast period. Improving reimbursement scenario for physical therapy, growing aging population, and rising incidence of degenerative neurological, cardiovascular, respiratory & musculoskeletal conditions are poised to surge the market in the Asia Pacific.

Some of the prominent players in the global physiotherapy equipment market include:

This report forecasts revenue growth at the global, regional, and country levels and provides an analysis on the latest industry trends and opportunities in each of the sub-segments from 2016 to 2030. For this study, Grand View Research has segmented the physiotherapy equipment market report based on application, type, demographics, end use, and region:

How big is the physiotherapy equipment market?

b. The global physiotherapy equipment market size was estimated at USD 19.1 billion in 2021 and is expected to reach USD 19.9 billion in 2022.

What is the physiotherapy equipment market growth?

Which segment accounted for the largest physiotherapy equipment market share?

b. North America dominated the physiotherapy equipment market with a share of 38.5% in 2021. This is attributable to the rising cases of accidents and mishaps, the growing incidence of osteoporosis globally, and the increasing geriatric population.

Who are the key players in the physiotherapy equipment market?

What are the factors driving the physiotherapy equipment market?

b. Key factors that are driving the physiotherapy equipment market growth include unhealthy eating habits and a hectic lifestyle resulting in pain in the ligaments, nerves, muscles, back, and neck and an increasing prevalence of stroke and Parkinsonâ€™s disease.