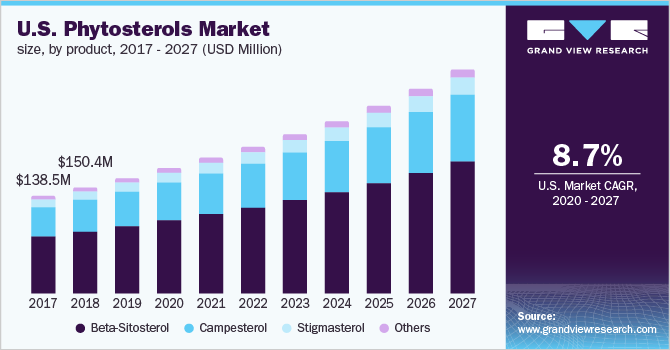 Ascending demand for dietary supplements complementing cardiovascular health is projected to increase the consumption of phytosterols as a functional ingredient. This is further accelerated by the growing per capita expenditure on healthcare and pharmaceuticals. Smaller profit margins from bio-refineries and vegetable oil extraction are likely to act as a restraining factor against the growth of the market for phytosterols to some extent. However, biotechnological advancement in the near future is projected to boost growth over the forecast period.

Increasing concerns about the impact of conventional chemical ingredients on the environment have prompted the use of bio-based and sustainable ingredients across various industries. The manufacturing sector is shifting its focus toward incorporating bio-based/plant-based raw materials to reduce carbon footprint and gain consumer confidence by providing products having fewer or no side effects.

The cosmetics industry offers a wide range of mature plant-based products owing to the significant rise in demand for bio-based cosmetic products. Phytosterols are used in personal care and cosmetics products, such as anti-aging creams. Plant-based profile of the product coupled with skin-replenishing benefits is projected to foster the growth of the market for phytosterols over the forecast period.

Europe is an early adopter of the bio-based economy. According to a report published by the European Commission on “A sustainable bioeconomy for Europe: strengthening the connection between economy, society, and the environment, the bioeconomy adopted by Europe highly supports the strengthening and modernization of the industrial base in the region by creating new value chains that are greener, more efficient, and cost-effective. The development of biotechnology and related processes has significantly boosted the growth of industries such as cosmetics, in terms of plant-based or bio-based ingredients.

Beta-Sitosterol, which can be derived from plant woods and vegetable oils, is significantly used in dairy products, beverages, and as an additive in dietary supplements. Also, a significant number of obese people consume 1.5g to 5g of beta-sitosterol daily for body fat reduction. The growing inclination of consumers towards health and nutritional intake has positively impacted the demand for beta-sitosterol. Consequently, beta-sitosterol is expected to be one of the prominent segments in the market for phytosterols.

Campesterol is used as a food additive and is also marketed as a dietary supplement as it has cholesterol-lowering properties. Increasing demand for phytosterol-fortified nutritional supplements and food products is projected to drive the product demand in the food ingredient segment over the forecast period.

Stigmasterol and its derivatives, including stigmasterol glucoside, stigma-4-en-3-one, spinasterol, fucosterol, and 29-fluorostigmasterol, act as intermediates in the production of vitamin D3. Vitamin D3 is used to prevent bone disorders such as rickets and osteomalacia in humans. Such factors make stigmasterol ideal for pharmaceutical applications. In addition, research activities aimed for the development of stigmasterol in preventing breast and colon cancer are anticipated to open new avenues in the phytosterols market over the forecast period.

Pharmaceutical, cosmetics, and food ingredients are the prominent applications of all phytosterol products. The pharmaceutical segment comprises tablets, creams, and medicinal products. Factors such as increased cholesterol levels among the geriatric population along with the prevalence of lifestyle diseases and other health conditions have fostered the demand for phytosterols in pharmaceutical applications. 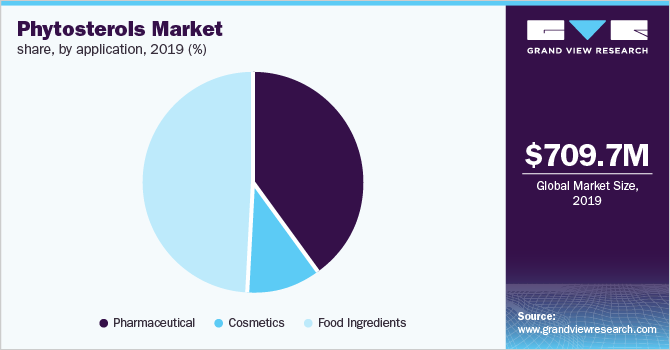 In the cosmetics industry, phytosterols derivatives/formulations find application in creams, skincare, sun care, hair care, and oral care products. The outermost layer of skin is made of keratinized cells, which consist of ceramides, free fatty acids, and sterols. The sterols play a significant role in preventing the penetration of exogenous substances through the skin. Moreover, they regulate skin moisture and prevent uncontrolled water loss from human skin. Therefore, the formulation of phytosterols in cosmetic products guarantees healthy and soft skin with a more pleasing appearance.

In the food industry, phytosterols are used as an ingredient in products such as spread, cream, cheese, turkey liver sausage, mayonnaise, chicken balls, yogurt, buttermilk, soymilk, and oatmeal. They are added to the above-mentioned food products owing to their properties to reduce the absorption of bad cholesterol in the gastrointestinal tract, thereby lowering the overall cholesterol level in the human body. Therefore, the demand for phytosterol is expected to boost as a food ingredient owing to its positive health benefits.

Regional segmentation includes North America, Europe, Asia Pacific, Central, and South America, and Middle East Africa. Across all the regions, Europe is expected to be one of the prominent markets for phytosterols and is expected to grow at a significant rate over the forecast period.

The growth in product demand from Europe is majorly driven by the mature pharmaceutical, cosmetics, and food industries in the U.K. and Germany. The demand is further accelerated by the early adoption of the bio-based economy in the region, which has fostered the application of bio-based ingredients across end-use industries such as cosmetics.

Europe is followed by North America in terms of market value, which is further followed by other lucratively growing regions including the Asia Pacific and Central and South America. Comparatively, slower market growth is expected to be witnessed in the Middle East and Africa owing to a lack of awareness and lesser adoption of nutraceuticals in the area when compared to the rest of the regions.

The key feedstock used for the production of phytosterol by these manufacturers is tall oil, fatty acid derivatives, pine oil, sunflower oil, and soy oil. Operational strategies of some of the prominent market players include massive investment in R&D for the optimization of production processes in order to increase their profitability.

Mergers or acquisitions can be expensive, time-consuming, and complicated affairs, especially for small players. In such a case, a strategic alliance in which two separate companies work in coordination with each other by supplying different ingredients to each other or by developing new products and applications through R&D is expected to be advantageous for the manufacturers.

This report forecasts revenue growth at global, regional, and country levels and provides an analysis of the latest industry trends in each of the sub-segments from 2016 to 2027. For the purpose of this study, Grand View Research has segmented the global phytosterols market report on the basis of product, application, and region:

How big is the phytosterols market?

What is the phytosterols market growth?

Which segment accounted for the largest phytosterols market share?

b. Beta-Sitosterol dominated the phytosterols market with a share of 59.6% in 2019. This is attributable to rising usage in dairy products, beverages, body fat reduction, and as an additive in dietary supplements.

Who are the key players in phytosterols market?

What are the factors driving the phytosterols market?

b. Key factors that are driving the phytosterols market growth include increasing adoption of a healthy lifestyle, ascending demand for dietary supplements, and growing per capita expenditure on healthcare and pharmaceuticals.