The global plasma protein therapeutic market size was valued at USD 22.5 billion in 2017 and is anticipated to expand at a CAGR of 4.8% during the forecast period. Approval of plasma products across multiple indications, increasing R & D activities, and high demand for advanced therapeutic options are anticipated to drive the market growth.

Technological advancements, favorable reimbursement policies, and improved standard of living have led to increased life expectancy, contributing to rise in geriatric population. Aging is considered the greatest risk factor for the development of cardiovascular and neurological diseases. 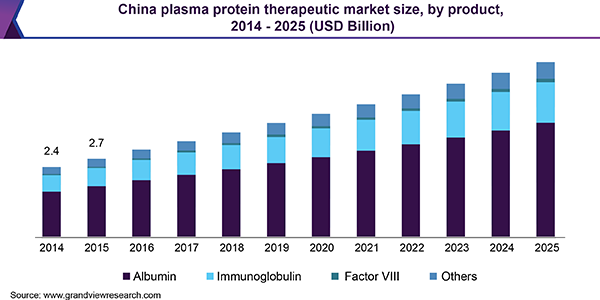 Development of novel products that offer clinical benefits such as improved efficacy and easy sample plasma extraction techniques are expected to increase penetration of plasma proteins in the market. Strong demand for albumin in Asia Pacific and higher volume of immunoglobulin usage in developed countries are projected to drive the market over the forecast period.

Manufacturers focus on innovation to produce plasma-derived products for the treatment of several neurological diseases, such as neuropathic pain, Myasthenia gravis, and post-polio syndrome among others. Albumin is also under clinical investigation for treatment of liver disease, malaria, sepsis, and Alzheimer’s disease. Moreover, the higher doses required for the subcutaneous use of immunoglobulins are also anticipated to propel the growth in developed economies, such as the U.S.; where the annual cost of Subcutaneous Immunoglobulin (SCIG) treatment is approximately USD 40,000.

Based on product, the plasma protein therapeutics market is segmented into albumin, Immunoglobulins (IG), plasma-derived factor VIII, and others. In 2017, immunoglobulin captured the leading position with more than 45.0% market share. The large share can be attributed to the approval of biologics across multiple indications, ease of administration, and treatment cost.

The albumin segment is expected to gain significant share over the forecast period driven by improved diagnosis of hypoalbuminemia caused by liver cirrhosis and hepatitis B. High demand and usage in China, which is the largest market for albumin, is anticipated to further fuel the growth. Patients suffering from moderate to severe hemophilia A require clotting factor VIII as a preventive or on-demand therapy. However, approximately 70.0% of hemophilia patients receive none or inadequate treatment. The factor VIII market is expected to witness a decline in sales due to increasing competition from recombinant and other long-term therapies.

The others segment includes alpha-1 antitrypsin, hyperimmune immunoglobulins, coagulation factors, fibrogammin, and c1 esterase inhibitors. Alpha-1 Antitrypsin (AAT) is used as a replacement therapy to treat a rare form of hereditary emphysema. The deficiency causes conditions such as Chronic Obstructive Pulmonary Disease (COPD), bronchitis, and neonatal hepatitis. Currently, only about 10.0% to 15.0% of AAT deficient patients receive treatment in the U.S. and Europe, thus creating room for market growth. The overall segment is anticipated to exhibit lucrative growth driven by improvement in diagnosis rate and product launches.

On basis of application, the market for plasma protein therapeutics is segmented into Hemophilia, Primary Immunodeficiency Diseases (PID), Idiopathic Thrombocytopenic Purpura (ITP), and others. Primary immunodeficiency diseases include more than 200 rare, chronic diseases that result from a defect in the immune system.

Globally, more than 6.0 million individuals are living with a PID, of which less than 60,000 cases are reported annually. The PID segment captured the largest market share in 2017 and is expected to exhibit substantial growth through the forecast period. Increasing expansion of clinical applications for immunoglobulins, approval of SCIGs, and high treatment costs are contributing to the segment growth.

Geographically, the market is segmented into North America, Europe, Asia Pacific, Middle East and Africa, and Latin America. Approximately 70.0% of the market is concentrated in North America and Europe. The U.S. spearheaded the market with more than 40.0% share in 2017. Presence of large patient base, growing geriatric population, availability of well-developed infrastructure for storing, and maintaining high-quality source plasma are some of the key regional drivers. Increased adoption of novel therapeutics and rising disease prevalence are some of the other key factors contributing to the regional growth. 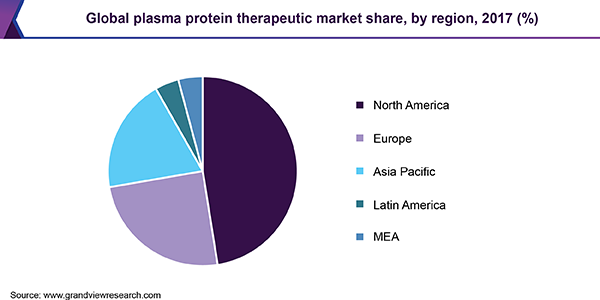 Asia Pacific is expected to exhibit the fastest CAGR during the forecast period of 2018 to 2025. China ranks first in the global albumin market, supported by high demand and usage of albumin in the country. In addition, factors like increasing demand for advanced treatment options, developing economies, and increasing per capita income are anticipated to create growth avenues for the market players in emerging countries over the forecast period.

The market is expected to remain competitive with players focusing on novel drug development and expanding plasma collection networks. In August 2018, Grifols S.A. acquired 24 plasma donor centers in the U.S., operated by Biotest AG. Companies are focusing on collaborations for broadening their product portfolio & regional presence and conducting clinical trials to increase their market share. In June 2016, Shire Plc acquired Baxalta, spun off biopharmaceutical division of Baxter Inc. for USD 32.0 billion. According to the deal, Shire acquired Baxalta’s product portfolio and a robust pipeline for the treatment of rare diseases.

This report forecasts revenue growth at global, regional, and country levels and provides an analysis of the latest industry trends in each of the sub-segments from 2014 to 2025. For the purpose of this study, Grand View Research has segmented the global plasma protein therapeutics market report on the basis of product, application, and region: