The global pneumatic nebulizers market size was valued at USD 490.6 million in 2015 and is projected to grow at a CAGR of 6.2% over the forecast period. The high growth is attributed to the rising demand for non-invasive methods of drug delivery, increasing incidence of various respiratory disorders, and the surging geriatric population.

The increasing incidence of respiratory diseases is a vital impact rendering factor supporting the growth of this sector. In 2011, according to the American Lung Association, around 10 million Americans suffered from chronic bronchitis. Moreover, the chances of developing chronic bronchitis increase with age as it was determined that out of those 10 million cases around 70.0% of people were above 65 years of age. 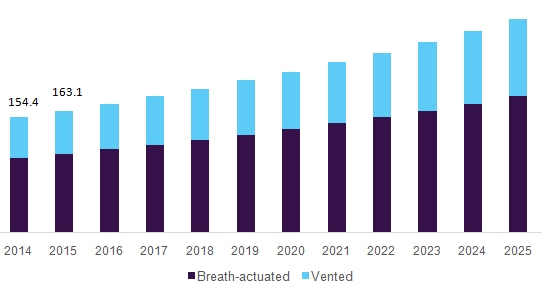 Nebulizers are electrically powered or battery-operated devices used to administer liquid drug in the form of mist and aerosol. The increased surface area yields a better drug therapeutic effect as compared to inhalation therapy. The device is used to treat various respiratory disorders such as asthma, Chronic Obstructive Pulmonary Disease (COPD), and cystic fibrosis. Moreover, the increasing application of pneumatic nebulizer as a method for treatment of diabetes, migraine, and cancer is expected to drive the demand for pneumatic nebulizers.

Government initiatives and organization funding deployed to improve the current treatment alternatives for respiratory conditions are also expected to result in an upsurge in the demand for inhalation devices. The American Heart Association along with the National Association for Stock Car Auto Racing (NASCAR) launched a DRIVE4COPD campaign in 2011. Through this partnership, NASCAR was responsible for screening around three million NASCAR fans for COPD.

Another initiative expected to positively influence the market is the COPD population screener by the COPD Foundation. Using this screener, American citizens who are 35 years and older are screened for COPD through a five-question test. If the screener indicates positive results, the individual is advised to visit a healthcare professional or call the COPD helpline, thereby raising awareness among the population to enable early intervention.

Vented product type held the majority share of the pneumatic nebulizers market in 2015 owing to their better availability and affordability as compared to breath-actuated nebulizers. Moreover, in February 2014, Kitabis Pak was approved by the FDA. This is the first of its kind reusable nebulizer delivering PARI LC PLUS and tobramycin in combination to patients with cystic fibrosis. 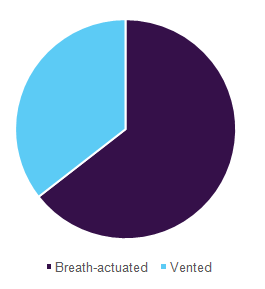 In 2015, North America accounted for the maximum revenue share. High incidence of COPD and various government initiatives are some of the contributing factors. In 2014, according to the CDC, COPD was established as the third-most important cause of death with 15.7 million people diagnosed with COPD. Moreover, the Ontario government has established two insurance programs called Home Oxygen Program and the Assistive Devices Program to promote higher diagnosis and treatment of COPD. The program covers up to 75% of the equipment cost.

While North America dominates the market, Asia Pacific is expected to be the fastest-growing region. Developing economies, such as China and India, are attracting international players to expand their geographic reach. In May 2015, Apex Medical Corporation launched their operations in India spanning across the following product verticals: support surface, respiratory, and autoclaves. The company aims to invest around USD 15 million in the initial development phase.

Contributors in this sector are developing better technologies to enhanced rug inhalation therapy. In February 2015, PARI Medical received FDA approval for its eRapid powered system. This device delivers Genentech’s Pulmozyme for cystic fibrosis and is designed to expedite the dosage preparation time such that it cuts down the overall treatment time from eight to two minutes.

Moreover, acquisitions undertaken to either expand the product portfolio or to enable market entry into potentially profitable regions are being increasingly witnessed in this sector. In September 2014, Omron Healthcare acquired NS Indústria de Aparelhos Médicos for USD 84 million to expand its nebulizer portfolio and accelerate product sales in Brazil.

This report forecasts revenue growth and provides an analysis on the latest trends in each of the sub-segments from 2014 to 2025. For the purpose of this study, Grand View Research has segmented the global pneumatic nebulizers market on the basis of type and region: