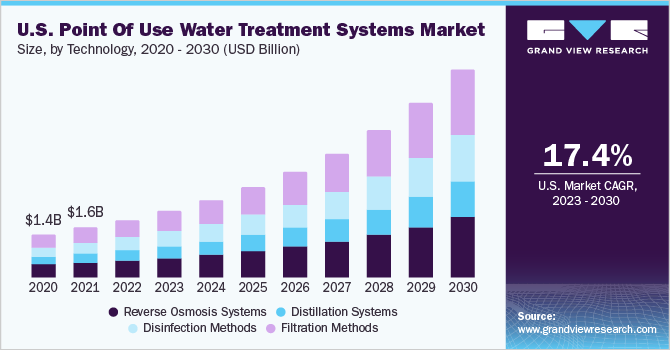 In 2016, reverse osmosis systems led the technology segment, with a sizeable share of 43.9%, principally owing to the extensive penetration of this technology and the hassle-free installation and usage. In terms of volume, RO technology contributed over 208.9 million units in the global point of use water treatment systems market in 2016. Although RO systems are predicted to witness a slowdown by 2025, mainly due to manufacturers launching systems that have technologies in combination, for instance, RO and UV systems.

Tabletop pitchers point of use water treatment systems market was valued at USD 6.9 billion in 2016 and is predicted to be valued at USD 14.6 billion by 2025, mainly owing to the affordability of the product coupled with convenience in use. Faucet mounted filters are estimated to grow at 6.8% CAGR over the forecast period. These filters find wide adoption especially in developing regions like India and South Africa. In terms of units, the countertop unit segment contributed over 45.5 million in 2016 and is projected to account for 165.9 million by 2025.

Countertop units are extremely popular in Asian countries including China and South Korea, owing to the economical prices and larger capacity dispensed by these units. On the other hand, under the sink filters find wide adoption in Europe and North America due to aesthetics as these units are concealed and kitchen counters look decluttered. Under the sink, the segment accounted for 28.7 million units of the point of use water treatment systems market in 2016 and is projected to reach 68.5 million units by 2025. 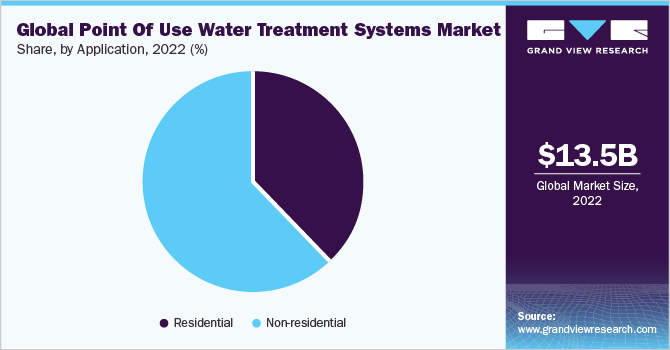 The Asia Pacific dominated the global point of use water treatment systems market with over 31% of the global revenues in the world. In 2016, China point of use water treatment market was valued at USD 1.57 billion and is predicted to expand over USD 2.47 billion by 2025. China has a large presence of local manufacturers and suppliers on the equipment helping it dominate the global scenario, primarily due to large-scale investments made for developing the technology.

Europe emerged as the second-largest market in 2016 and is projected to be valued at USD 4.5 Billion, in terms of revenue, in the global point of use water treatment systems market over the forecast period. UK and Russia led the regional market, cumulatively accounting for more than 47% of the Europe market.

North America point of use water treatment systems market, led by the U.S., was valued at over USD 3.5 Billion in 2016 and is predicted to expand over USD 4.6 by 2025. North America is an extremely mature market, where consumer awareness regarding the importance of a healthy lifestyle and potable drinking water is high.

Manufacturers in the point of use water treatment systems market are paying close attention to the developments in the water purifier business, and formulating new business strategies to consolidate their market position. Companies are investing heavily in the research and development and introduce innovative designs along with enhanced capacities, to augment their adoption.

This report forecasts revenue growth at global, regional & country levels, and provides an analysis of the latest trends and opportunities in each of the sub-segments from 2014 to 2025. For the purpose of this study, Grand View Research has segmented the point of use water treatment systems market on the basis of technology, device, application, and region.