The global polyethylene naphthalate market size was valued at USD 827.0 million in 2014 and is expected to expand at a CAGR of 7.5% over the forecast period. Polyethylene Naphthalate (PEN) is mainly used in packaging applications owing to its improved thermal and barrier properties, such as resistance to oxidation. Growing demand for high strength photographic films is expected to fuel market growth over the forecast period.

PEN films are a key component of food packaging applications on account of their higher stiffness modulus, which is responsible for providing enhanced barrier capabilities and increasing strength of the material. Furthermore, these films are used in producing pressure sensitive tapes and thermal sheets. They are also involved in solar cell protection. 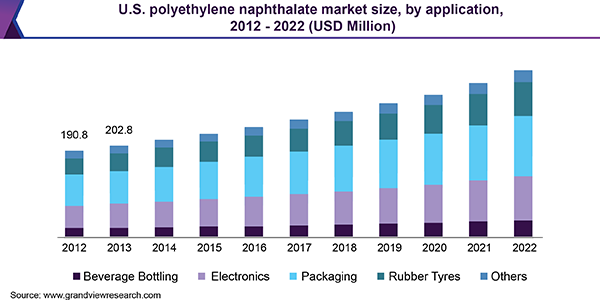 Polyethylene naphthalate films have a higher shrink temperature as compared to polyethylene tetrapthalate, thereby making them suitable for long term electrical use at above 130°C. In addition, PEN films have superior UV resistance and offer high resistance to hydrolysis in hot aqueous or alkaline conditions, thereby increasing their use in electrical and electronic applications.

Tight supply of 2,6-NDC feedstock over the past few years owing to production complexity has caused lack of availability of the feedstock, resulting in high raw material prices. Furthermore, high manufacturing cost is a major concern for PEN manufacturers, which has caused capacity contractions and reduced margins for suppliers and manufacturers.

Constrained supply of the product, along with high manufacturing cost, has impacted the commercialization of PEN, which is a major challenge for manufacturers to compete in a market dominated by polyethylene terephthalate (PET). However, recent development of low-cost monomers for producing PEN is changing the market dynamics. As a result, prices are expected to decline significantly over the next few years, which is expected to have a positive impact on growth.

Supportive regulations on the use of PEN in beverage bottling owing to enhanced resistance to oxidation is expected to have a positive impact on growth. In addition, it is extensively used in the manufacturing of high-performance tires. PEN when added to the rubber mix during tire manufacturing enhances rigidity, thus offering improved performance and longer product life.

The packaging application segment dominated the industry in 2014, accounting for 39.2% share of the global volume. Increasing demand for polyethylene naphthalate in the packaging application owing to higher shrinkage resistance, dimensional stability, superior barrier properties, and high-temperature stability is expected to propel the demand for the product over the next few years.

The electronics segment was valued at USD 185.7 million in 2014 and is expected to witness significant growth over the forecast period due to increasing demand for the product in manufacturing semiconductors, PCB’s, and supercapacitors. PEN exhibits superior properties including low oligomer extraction, dimensional stability, anti-hydrolysis, heat resistance, and strength. As a result, it is used in manufacturing a wide range of products including batteries, electric insulation, capacitors, printed circuit boards, magnetic storage tapes, and optical devices. 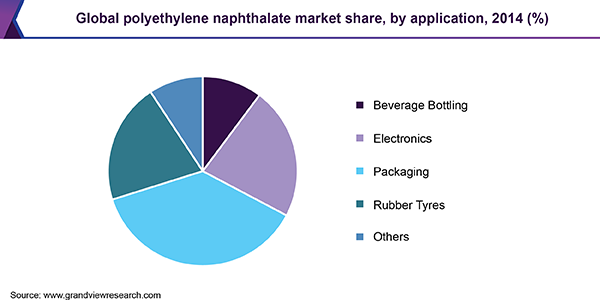 Rising use of PEN as a blending material in polyethylene terephthalate to improve its gas barrier and UV absorption properties is projected to augment the demand for polyethylene naphthalate over the forecast period. Moreover, the product is expected to witness a rise in application in manufacturing of components, which requires transparency and high chemical resistance.

Chinese raw material suppliers have improved on production technology, leading to lower raw material cost, which is expected to reduce the overall cost of PEN products over the next few years. As a result, the product is expected to compete with PET in similar application segments on account of improved physical properties.