Microinjection polymer molding is a process requiring specific molding machines with high speed, injection pressure, ultra-fine resolution, and precise shot control for molding micro-sized parts and tools. Growing demand for miniature materials for various applications spread across widespread end-use industries including medical, electronics, automotive, and telecom is expected to be a key factor driving the overall market for microinjection polymer molding. Some of the major polymers used for microinjection molding include polyether ether ketone (PMMA), polymethyl methacrylate (PMMA), polyethylene, polyoxymethylene, liquid crystal polymer (LCP) and polylactic acid (PLA). Thermoplastics are the most widely used polymers for microinjection molding and accounted for over 65% of market revenue in 2012. Shift in trend towards replacing polymers containing phthalates such as PVC with thermoplastics coupled with increasing demand for micro materials has prompted the use micro molding in the medical industry. Micro molded parts are largely used for manufacturing ear implants, micro filters, precision blades, bearing caps, and some others devices/equipment, which require precise features and geometries. Other applications of micro molded parts include wheel, micro gear plate, and operating pin, which are widely used in automotive and drive systems.

Microinjection molding holds various advantages over micromachining. Micro injection molding takes relatively less time to mold the components and utilizes low priced feedstock such as PEEK compared to micro machining which uses stainless steel and results in increased cost efficiency. On the other hand, micro machining usually requires high cost raw materials such as ceramic and metallic materials which leads to high product cost. North America emerged as the leading market for microinjection polymer molding followed by Asia Pacific and Europe. Application development in the U.S. has been a key factor for micro molded polymer penetration in the region. North America along with being the biggest market is also expected to be the fastest growing market for microinjection polymer molding. However, lack of awareness regarding the benefits offered by micro molding mainly in under developed countries is expected to hinder the market growth over the next six years. 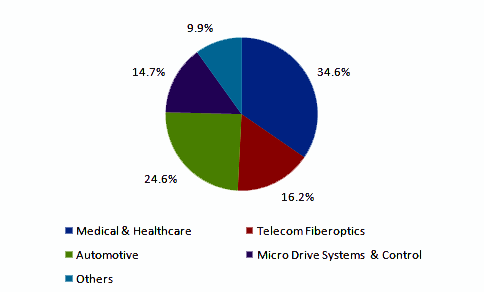 North America emerged as the leading market for microinjection polymer molding and accounted for over 40% of total market revenue in 2012. North America has been dominating the micro molding market on account of growing consumption of small sized products in several end-use industries such as medical, automotive, telecom, etc. Micro molding concept has been adopted by both the device manufacturers and end-use industries in the region. The medical and automobile industry accounted for major consumption of micro molded parts which together accounted for just over 50% of total regional revenue in 2012. North America was followed by Europe which accounted for 38% of the total revenue in 2012. Component manufacturers in Europe are now focusing on developing polymer micro molded products to leverage the cost benefits of the process. Owing to availability of biodegradable polymers, the demand for polymer devices from the medical industry has been growing since the last few years. Asia Pacific emerged as the third largest market for microinjection polymer molding and accounted for 14% of total revenue in 2012. Microinjection polymer molding market in Asia Pacific is expected to exceed a market worth USD 120 million by 2020 at an estimated CAGR of 14.4% from 2013 to 2020.

Major manufacturers are mainly concentrated in the developed economies of Europe and North America. Product differentiation and customization are considered to be the key factors for sustainability in the global market for microinjection polymer molding. The U.S. based Makuta Technics Inc., one of the leading companies operating in the market offers various molding technologies equipped with several different molding materials. The company also offers prototyping services for molding which significantly reduces the manufacturing time. It offers full tool prototyping as well as rapid prototyping services as a part of its differentiation strategy.

The COVID-19 pandemic is expected to restrain the manufacturing industry growth in the near future, which in turn is expected to result in checkered growth for machinery manufacturing companies. Furthermore, end-user companies have put on hold the existing orders until the time the lockdown situation is lifted. The report will account for Covid19 as a key market contributor.