The global polyphenylene oxide market size was estimated at USD 1.67 billion in 2019. is anticipated to grow at a compound annual growth rate (CAGR) of 4.6% from 2020 to 2025. Rising demand from industries such as automotive and electronics is expected to be one of the key trends in escalating market growth. A change in the global polymer industry structure, which involves rapid growth in Asia Pacific and steady growth in North America and Europe, is anticipated to influence the market positively. 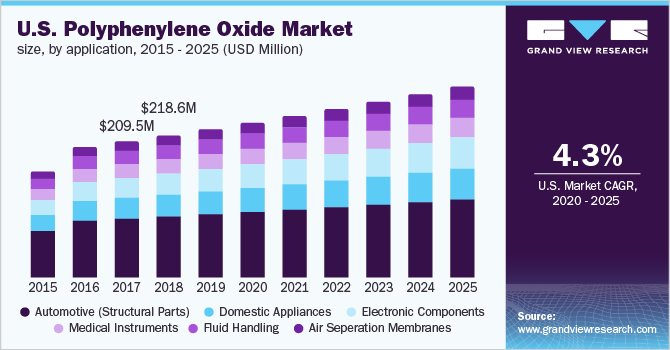 Polyphenylene oxide (PPO) belongs to the class of engineered polymers. Rising awareness regarding advanced materials, which improve end-product features as well as provide strength, is bolstering the demand for engineered polymers. Suppliers have now started working with original equipment manufacturers and compounders to develop new, innovative technologies and applications.

PPO is traditionally manufactured by oxidative polymerization of 2,6-dimethylphenol or adding parachlorobenzene in hydrogen sulfide solution in the presence of oxygen and by using a catalyst. The average profit margin for PPO manufacturers is 12.0% and is anticipated to stay for the next few years. Profit margins in the polymers industry have been high over the past years owing to a significant decrease in oil prices. Companies are now working towards improving their profits by reducing the cost of raw materials by switching to cheaper feedstocks.

Increasing consumer expenditure on electronic devices such as smartphones, LCDs, tablets, and laptops is likely to fuel the demand for PPO over the forecast period. China is projected to hold a prominent position in the global arena, owing to increasing production facilities and growing demand from end-use application industries. The country has witnessed a rapid increase in the demand for mobile devices in recent times. APAC is poised to be a promising destination for global players throughout the forecast period.

Rising demand for automotive components is expected to play a vital role in fueling demand for PPO. A rise in the number of automotive manufacturing facilities in emerging markets of Asia Pacific, Central & South America, and the Middle East & Africa is anticipated to supplement the growth of the overall market. Polyphenylene oxide finds application in automotive instrument panels, internal trim, headlights, wheel covers, fuse boxes, speaker grilles, mirror cases, and electrical connectors. A shift in production facilities of automotive components to emerging economies of Asia Pacific such as China, India, and Japan, owing to low-cost manufacturing is likely to stoke the product demand.

Increasing demand from automotive industry due to beneficial properties such as mechanical properties, low moisture absorption, excellent electrical insulation and dimensional stability is expected to drive growth over the next seven years. Growing automotive industry in emerging economies of Asia Pacific and the Middle East is expected to remain a key driving factor for growth.

PPO is widely preferred in automotive components owing to properties such as low specific gravity that reduces the overall vehicle weight without compromising the cost-performance ratio. It is further used for large exterior automotive parts such as doors and fenders due to properties such as excellent insulation properties, dimension stability, low moisture absorption, mechanical properties, inherent flame resistance and good processability.

2, 6-dimethylephenol is the major raw material for polyphenylene oxide and is one of the six isomers of Xylenol. Benzene, toluene and xylene prices have fluctuated constantly in the recent past, which is expected to pose challenges for PPO manufacturers. This volatile nature of crude oil derivatives puts pressure on the profitability of PPO producers and creates supply demand imbalance. Increasing raw material prices have affected the production and distribution cost, leading to increased final product cost.

Surging demand for polyphenylene oxide from the automotive and electronics industries is driving the market. Electronic components are now used for applications such as mobile phones, smartphones, portable media players, home theater, and microwaves. Burgeoning demand for such electronic devices, especially in emerging economies, is anticipated to work in favor of the PPO market. The growth of the electronic components market is spurred by newer technological developments such as digitization of consumer entertainment and communication. Rising innovation and R&D are paving way for advanced technology electronic devices, which in turn is likely to increase PPO demand worldwide. 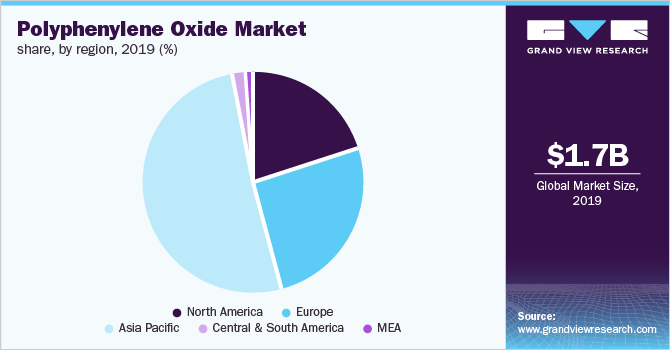 The fluid handling application segment is poised to post a noteworthy CAGR during the forecast period. PPO finds application in the fluid handling sector owing to properties such as low moisture absorption, excellent strength, and stiffness. Increasing customization of fluid handling pumps to meet specific customer demands is estimated to stir up the demand for polyphenylene oxide.

Asia Pacific dominated the polyphenylene oxide market and accounted for the largest revenue share of 53.76% in 2019. China, India and Southeast Asia are expected to be the primary growth markets in the region. Growing manufacturing sector shall drive plastic compounds demand in automotive, industrial machinery, and electrical & electronics industries. In the recent past, China and India have witnessed a spike in automotive production due to the technology transfer to the sector from western markets. 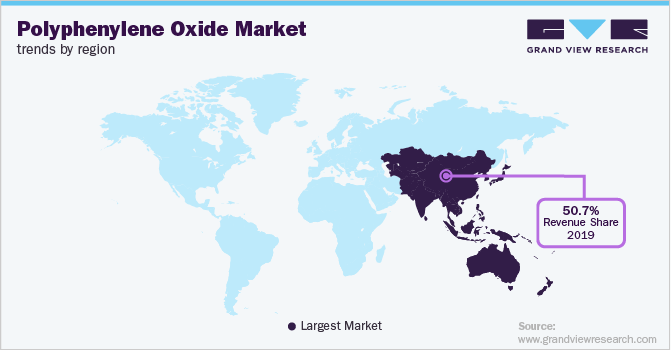 Various government initiatives to develop the manufacturing sector by providing subsidies, tax cuts, increase in FDI limit are attracting major global players to expand their operations in Asia Pacific. In 2016, China emerged as the largest automotive market across the globe. India is the largest two-wheeler market in the world. In electronics, China and India are the two biggest markets for smartphones. The presence of a well-developed automotive market along with growing infrastructure investment is creating a positive growth arena for the regional market.

China is the world leader in polyphenylene production. Low production costs in the country have triggered high investments in the plastics industry, including the plastics machinery manufacturing. China is not just the largest plastic producer but also the biggest plastic recycler globally. Around 50% of the global plastic recycling activities occur in China alone. The country imports more than 56% of recyclable plastic; majorly from U.S., Japan, Germany and U.K. Europe is dependent on China for around 87% of its plastic waste exports intended for recycling. Most of the country’s export plastic waste to China and import the recycled plastic for their consumption.

The Central & South America region is estimated to progress at a significant CAGR during the forecast period owing to ongoing development in the electronics and automotive industry. The electronics industry in CSA is attracting global investors owing to its rapid development, vertical markets, and economic growth. Positive economic trends in the region have considerably increased the purchasing power of customers, which has impacted the growth of the regional market positively.

The major factor driving polyphenylene oxide demand in the Latin America region is the increasing demand for automotive components and domestic appliances. Growing disposable income along with the expanding consumer goods industry is helping the plastic market flourish in the region. Except for a few countries, almost all the major countries in the Latin America region witnessed a significant GDP growth rate in past few years, which is another driving factor for the industry growth.

The North America market is driven by technologically advanced manufacturing bases, high consumer awareness, and a versatile end-user landscape. The U.S. is at the forefront of the regional market and is primarily driven by the increasing consumption of polypheylene oxide in automotive and industrial machinery applications.

North America is one of the largest regional segment in the polyphenylene oxide market. The demand is majorly driven by presence of large number of end use industries in USA and Canada. The easy availability of raw material in the form of shale gas coupled with manufacturing presence of companies such as Asahi Kasei Plastics North America and BASF is expected to augment future market demand.

The market has witnessed rapid growth over the past few years due to the increasing application of polyphenylene oxide in the automotive and electronics industries. Manufacturers are currently ramping up capacity to meet future market demand. The introduction of electric cars is going to play a crucial role in influencing the competitive environment. In August 2017, Toray Industries Inc. announced that it would be constructing a new polyphenylene sulfide (PPS) production facility at the Hungarian site of its subsidiary Zoltek Companies Inc.

This report forecasts revenue growth at a regional & country level and provides an analysis of the industry trends in each of the sub-segments from 2014 to 2025. For the purpose of this study, Grand View Research has segmented the global polyphenylene oxide market report on the basis of application, and region: 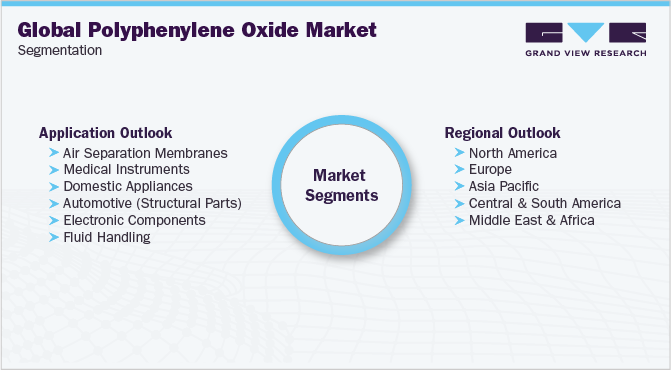