The global precious metal market size was valued at USD 182.1 billion in 2019 and is expected to grow at a compound annual growth rate (CAGR) of 9.0% in terms of revenue from 2020 to 2027. Demand for the product in jewelry application is likely to emerge as an influential factor for the industry growth over the forecast period. 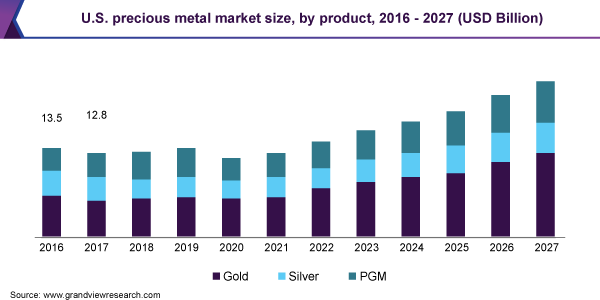 The use of gold, specifically in the jewelry industry, is projected to witness steady growth over the coming years. The commodity of gold has been an internal part of marriages, especially in India and China, wherein a significant amount of product is used in the form of jewelry and ornaments. For instance, India's wedding space observed nearly 10-12 million marriages annually with a total market estimation of more than USD 40 billion as of 2018. Similarly, China's marriage space witnessed nearly 10.1 million marriage registrations in 2018. The wedding market space of China and India is thus likely to present numerous growth opportunities for the gold jewelry market segment over the coming years.

In the U.S., the total production of precious metals was evaluated around 1,195.6 tons as per the stats released by the United States Geological Survey (USGS) in 2020. Within this category, gold production reached nearly 200 tons in 2019 and approximately 15.6 tons for platinum group metals (PGM). PGM resources were mined in Montana by Sibanye-Stillwater, which is the sole producer of PGM in U.S.

The jewelry sector accounted for a key share in the U.S. precious metals industry while capturing nearly 40% share in terms of volume as of 2019. The concentration of gold jewelry vendors in the states of New York, Rhode Island, California, Texas, and Florida consumed nearly 50% of the product demand in 2019.

However, demand for the commodity is likely to witness a sharp downturn due to the global pandemic situation. U.S. is among the worst hit countries due to coronavirus with the unemployment rate reaching all time high by the end of first quarter of FY2020. The country has observed its worst unemployment rate since the great depression era. The unemployment rate climbed to nearly 14.7% in April 2020 with nearly 20.5 million people losing their jobs. Amid this sharp declining trend, the precious metals industry of the country is likely to witness stagnant growth in the short term.

Despite the coronavirus pandemic, it is believed that the domestic industrial activities in the U.S. are likely to make a rebound once the government of the country makes special provisions to boost its manufacturing sector. As of April 2020, the congress of the country passed a relief aid of nearly USD 484 billion to combat the coronavirus pandemic. The new aid packages, specifically directed to jump start the manufacturing, may act as a positive sign for the industry participants in the near future.

Silver led the market and accounted for more than 84.0% share of the global volume in 2019. The market is segmented into gold, silver, and platinum group metals (PGM). The silver is likely to dominate the market over the forecast period owing to its wide usage across the industrial and jewelry sector, coupled with low cost as compared to its counterparts.

Mexico and Peru are projected to remain the key production hubs for the silver commodities in 2019. As per the stats released by USGS in 2020, Mexico’s silver production was 6,120 metric tons, followed by Peru at 4,160 metric tons as of 2018. Other key producing nations are Russia, China, Australia, and Chile.

In terms of revenue, gold led the market and held 77.5% share in 2019 due to its high trading prices and greater usage in the jewelry sector. The gold production for 11 years is witnessing continuous growth with new mines got commissioned in 2019. Among these, Meliadine mine by Agnico Eagle Mines Ltd. and Gruyere mine by Gold Fields Ltd. and Gold Road Resources Ltd. are likely to add a major chunk of the new production. Thus, new product additions are likely to further aid the demand trend of the commodity over the coming years.

The PGM product segment is likely to witness sluggish growth as compared to its counterparts over the forecast period. The downturn in automotive vehicle manufacturing is already impacting the demand traits of the platinum and palladium. The emergence of a global pandemic is likely to further limit automotive production for FY2020. This is leading to a low demand for autocatalyst, which, in turn, is projected to affect the market reality of the PGM product segment in the short term.

The industrial application segment led the market and accounted for more than 44.0% share of the global volume in 2019. The segment growth is largely attributed to the growth of the electrical and electronics sector, wherein majority of silver commodity is used for various purposes.

The jewelry segment is the second largest application of the product. The sector despite its turbulent times is likely to create healthy prospects for the global precious metals industry over the forecast period. The steady consumption traits in the gold jewelry sector of China and India is likely to remain a key driver in the upcoming years. The wedding industry of both countries offer round the year opportunities for the jewelry market space vendors, thereby assisting the demand for precious commodities, such as gold and silver. 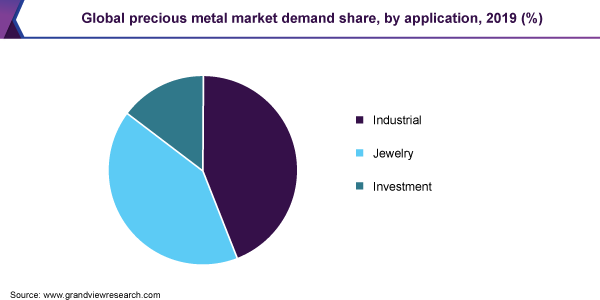 The investment application segment is expected to expand at the highest CAGR over the forecast period in terms of volume. The ongoing declining prices of platinum have generated greater attention from Japanese investors, which are likely to continue their strong purchase behavior. The country’s investors are significantly focused on PGM commodities due to the wider discount rates as compared to its counterparts.

The Asia Pacific dominated the market and accounted for over 37.0% share of the global volume in 2019. The region comprises the upcoming global powerhouses, such as India, Japan, and China. Among these, China has the widest influence over the market space of precious metals industry. The country is the leading consumer of gold and PGM as of 2019. The strong domestic manufacturing sector of China is the key factor driving the demand for the aforementioned commodities in the country.

Another key factor propelling market growth is the emergence of India as an alternative powerhouse of the region. The country is the second largest consumer of gold commodities in the Asia Pacific. The country also has a strong jewelry sector owing to the humongous wedding industry. Similarly, the country is also evolving its manufacturing capabilities by attracting foreign investment in the field of chemical, energy, automotive, construction, and many more. Therefore, over the coming years, India is likely to play a key role in augmenting the growth of the global precious metals industry.

North America is projected to expand at the second fastest CAGR in terms of volume. Easy availability of silver resources in Mexico and a strong manufacturing base in the U.S. and Canada are likely to push the market growth of precious metals in the region. In addition, the streamlined value chain of these three aforementioned countries is expected to play a crucial role in positively influencing the market growth over the coming years.

Europe is likely to witness slow growth as compared to its counterpart regions owing to the slowdown in the industrial as well as the jewelry sector. The region is facing prime challenges in form of stability due to the severe impact of coronavirus. The global pandemic has critically crippled the manufacturing centers of the region, thereby leading to stagnant demand for precious commodities.

The Middle East and Africa accounted for a small revenue share in the industry in 2019. However, the region is expected to expand at the highest CAGR in terms of revenue over the forecast period. The growth is largely attributed to the Gulf countries, which are expanding their economies from oil reliant to service and tourism based economy. This is likely to play a major role in boosting the growth of the region, thereby positively influencing the market growth over the projected period.

A key move by the European Union and the U.S. government to track the original sourcing of the commodity is likely to assist in limiting the black market activities of the precious commodities. The regulatory bodies of the aforementioned regions have pushed the vendors of the market to provide full disclosure details regarding the sourcing of commodities and its point of origin.

The industry participants are focusing on creating joint ventures to explore and mine precious commodities in African countries, wherein large untapped reserves are yet to be discovered. The new upcoming mining projects are likely to play a key role in supporting the ever rising demand for precious commodities, thereby offering numerous opportunities for market vendors. Some of the prominent players in the global precious metal market include:

This report forecasts revenue and volume growth at the global, country, and regional levels, and provides an analysis of the latest industry trends and opportunities in each of the sub-segments from 2016 to 2027. For the purpose of this study, Grand View Research has segmented the global precious metal market report on the basis of product, application, and region: