The global preterm birth and PROM testing market size was valued at USD 1.6 billion in 2020 and is expected to expand at a compound annual growth rate (CAGR) of 3.0% from 2021 to 2028. This growth can be attributed to the increasing average age of pregnant women, leading to an exponential rise in the number of preterm births. Growing advancements in point-of-care diagnostics are also significantly driving the market. Preterm births are when childbirth occurs before the completion of 37 weeks of pregnancy, and it is a leading cause of death in children. Several factors have been identified for preterm birth. One of the major causes is a delay in pregnancy to the age of 34 and above. Advanced maternal age is a risk factor for unhealthy children and increases the probability of preterm birth. As per a study conducted in the U.S., the youngest and oldest mothers have a high risk of preterm birth. During 2017 to 2019, on average, preterm birth rates were 14.5% for women aged 40 and older, followed by 10.3% for ages 30 to 39 and the lowest rate was 9.5% for the age of 20 to 29. 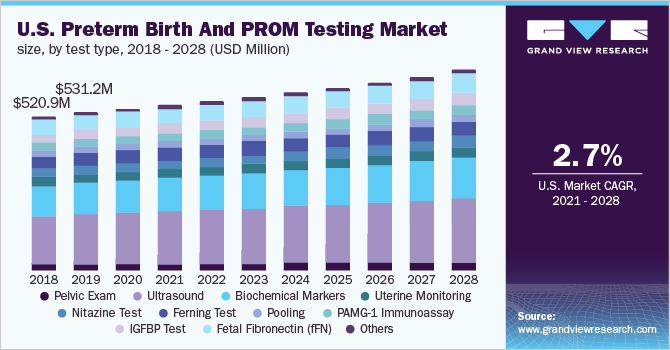 The outbreak of the Covid-19 pandemic and high risk of preterm birth associated with Covid-19 infection has upsurged the demand for its testing solutions. According to the data published by CDC, pregnant women with Covid-19 are at augmented risk for critical complications and might be at high risk for preterm birth. Moreover, the disrupted global supply chain affected the movement of preterm birth and PROM testing solutions across some regions, thus, had a notable negative impact on the market.

Researchers from the American Society of Microbiology have conducted extensive studies on POC in 2016 for PROM testing. They identified certain components of proteins and bacteria in the vagina, which can assess the level of risk for preterm birth. The adoption of POC tests is gaining momentum owing to its low cost, high reliability, and faster turnaround time. As per Stanford's study, many pregnant women around the globe, specifically in low-income countries, do not have access to prenatal ultrasound scans. However, a simple, inexpensive, and accurate test can improve prenatal care.

Actim PROM is the U.S. FDA-approved POC rapid test, to detect PROM. It provides rapid accurate results for preterm births. More than 7 million tests have been distributed in over 70 countries, since it is highly reliable with a 97% sensitivity and specificity. Actim Prom helps detect the protein biomarker Insulin-like Growth Factor Binding Protein-1 (IGFBP - 1). The advancements in POC diagnostics for PROM can encourage pregnant women to test for PROM more frequently when compared to a long procedure of testing held in hospitals and clinics.

According to UNICEF, India accounts for 25.0 million births each year and witnesses the death of one child every minute, with the causality rate due to premature birth at 35.0%. While significant development in Special Newborn Care Units (SNCUs) leads to a reduction of neonatal mortality; the socio-cultural barriers in health care for female infants are considered a major causality for female premature deaths. However, India has witnessed a significant reduction in the rate of child mortality, which can be attributed to recent attention provided to the safety of female infants.

In 2020, the ultrasound segment dominated the market and accounted for the largest revenue share of 31.9%. Ultrasound imaging is one of the traditional methods of testing preterm labor. Doctors often perform an ultrasound to create images of the uterus and the baby to determine if the cervix has dilated or effaced, thus, leading to high adoption rate.

On the other hand, the Insulin-like Growth Factor Binding Protein 1 (IGFBP-1) test segment is anticipated to grow at 3.4% in the market over the forecast period. This can be attributed to the fact that (IGFBP-1) or placental protein 12 is an important protein biomarker for PROM testing. High levels of the protein in vaginal fluid indicate a rupture of the amniotic sac, wherein protein is present in higher concentration compared to serum, urine, and cervical mucus. PREMAQUICK, by BIOSYNEX, is an IGFBP-1 biomarker test that helps in predicting preterm birth in 7 days with 87.1% sensitivity, 95% accuracy, and 92.4% specificity.

North America dominated the preterm birth and PROM testing market and held the largest revenue share of 37.7% in 2020 due to the high prevalence of preterm births in the region. Rising alcohol and illicit drugs consumption is also contributing to the increase in a number of premature births in the U.S. Various awareness campaigns and initiatives being undertaken by nonprofit organizations in both the U.S. and Canada are expected to address challenges faced by premature babies and their families. 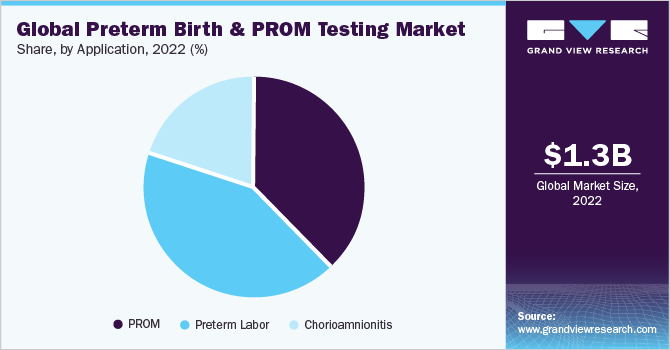 In Asia Pacific, the market is expected to grow fast over the forecast period owing to the presence of a large population in China and India. In addition, the rising number of preterm births in developing countries of the region is significantly creating a potential market in these regions, thereby leading to high growth of the market. Rapid technological advancements, the presence of a well-established healthcare structure, increase in the number of awareness campaigns and nonprofit organizations supporting preterm infants and their families are some of the vital factors positively impacting the market. Major countries included are Japan, China, India, South Korea, Australia, and Singapore.

The market is highly competitive with presence of many global and local players. The major companies are involved in adopting different growth strategies such as new product development, product differentiation strategies, and expansion of geographical reach in an attempt to capture large share of the market. For instance, in April 2018, QIAGEN received FDA approval for its new point-of-care test-PartoSure. This newly launched test is intended to evaluate the risk of spontaneous preterm birth in women with symptoms of preterm labor. Some of the key players in the preterm birth and PROM testing market include:

This report forecasts revenue growth at global, regional, and country levels and provides an analysis of the latest industry trends in each of the sub-segments from 2016 to 2028. For the purpose of this study, Grand View Research has segmented the global preterm birth and PROM testing market report on the basis of test type and region:

Who are the key players in the preterm birth and PROM testing market?

What are the factors driving the preterm birth and PROM testing market?

How big is the preterm birth and PROM testing market?

What is the preterm birth and PROM testing market growth?

Which segment accounted for the largest preterm birth and PROM testing market share?

b. North America dominated the preterm birth & PROM testing market with a share of 37.73% in 2020. This is attributable to the rising incidence of premature births, poor lifestyle choices, and increasing maternal age.