The global prostate cancer therapeutics market size was valued at USD 7.9 billion in 2016 and is expected to grow at a CAGR of 4.8% over the forecast period. As per data published by the World Cancer Research Fund International, more than 1.1 million cases of prostate cancer were reported in 2012, which accounts for around 8 percent of the total tumor cases. Although the exact cause of prostate cancer is not known, factors associated with it include overweight, obesity, and history of any other tumorous growth. Even patients with cardiovascular diseases are prone to metastasis of cancer. Thus, the rising incidence rate of the above-mentioned conditions is driving the market growth. 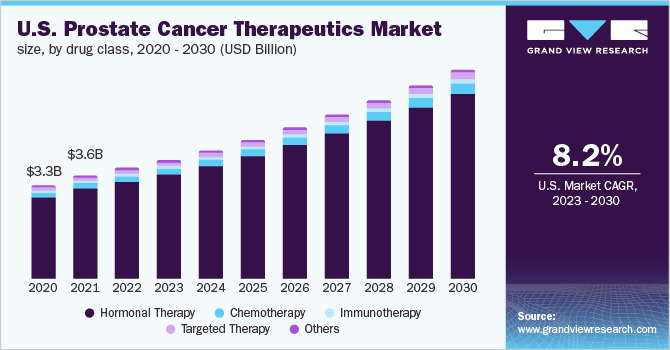 The adoption of innovative technologies in screening & diagnostic tests is projected to drive growth. The incorporation of multiparametric MRI (mp-MRI) can significantly improve the detection of tumors and also provide confirmation whether there is a need for tissue biopsy. In addition, market players are investing in research for the development of therapeutic products for the treatment of such tumors. For instance, there is a strong pipeline of products such as Tc-99m (Progenics), radium-223 dichloride (Xofigo, Bayer), ODM-201 (Orion and Bayer), which are in their phase 3 studies and are projected to enter the market in the near future. In addition, many generic products are likely to enter the market owing to the expiry of patents of the major existing products during the forecast period. Thus, these factors are expected to drive growth.

Along with screening & diagnostic tests, awareness about the availability of medicines amongst public is also of prime importance to break the social stigma associated with tumor treatment and encourage patients to avail treatment in time. The governments of developed countries are taking efforts to conduct & implement programs for creating awareness of screening tests, such as Prostate-Specific Antigen (PSA) blood tests and Digital Rectal Exam (DRE) for male patients above 50 years. Prostate Cancer Canada has been established to support research, cure, and prevention of prostate cancer. Such awareness programs are also being undertaken in developing countries like China, India, & Brazil.

However, the high costs associated with a tissue biopsy, especially during the advanced stage of tumor and consultation fees of the physician is expected to slow down growth. In addition, factors such as poor reimbursement of treatment costs may affect the adoption rate of treatment procedures negatively.

Prostate cancer is one of the most common cancers diagnosed amongst men aging over 45 years. On-time screening and early diagnosis through PSA and DRE increase the success rate of the treatment regimen. The market is segmented into hormonal therapy that includes Luteinizing Hormone-Releasing Hormone (LHRH) agonist, LHRH antagonist, & anti-androgen; chemotherapy; immunotherapy; and targeted therapy. 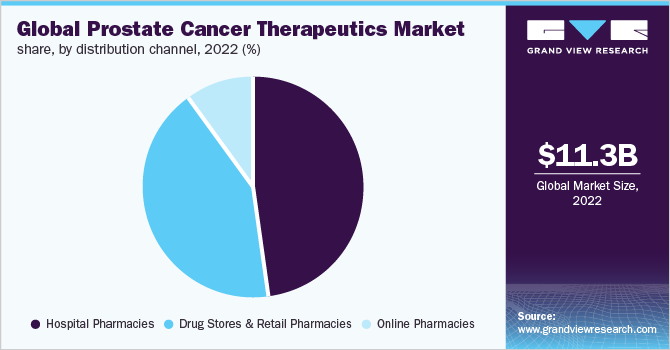 In 2011, Zytiga by Johnson & Johnson received FDA approval in 2011. This drug is a gold standard for the treatment of prostate cancer and is witnessing a rapid rise in sales year on year. Zytiga’s composition of matter patent expired in 2016. Astellas Pharma, Inc.’s brand Xtandi is a threat to Zytiga. Sales of Xtandi are already at par with Zytiga as patients are using it for long-term treatment and the product is gaining popularity amongst urologists. Thus, sales of Xtandi are increasing the revenue generated by the hormonal drug class. Thus, this segment holds the largest share.

North America was leading the global market with the largest revenue share in 2016. Rising prevalence and high mortality rate of prostate cancer in the U.S. are the primary reasons responsible for the dominance of North America in the market. Furthermore, this region is witnessing high investment in R&D for the development of newer immunotherapies and targeted drug therapies to treat such tumors.

Asia Pacific is anticipated to be the fastest-growing market over the forecast period. Rising awareness of such tumors would primarily drive growth. Governments of various countries in this region are playing a vital role in creating awareness through programs and online portals that provide detailed information regarding screening & diagnosis through PSA blood tests and DRE for male patients over 50 years of age.

Adoption of new technologies, improving healthcare infrastructure, and growing investments by market players for the development of immunotherapies and targeted therapies, which is resulting in a strong pipeline, are some of the factors expected to trigger growth in the Asia Pacific region. In China, major players are collaborating with local & government institutions such as the Chinese Urological Association to conduct research activities for the treatment of prostate cancer. As a result, Asia Pacific is projected to be the fastest-growing region.

Some of the major players include, but are not limited to, Johnson & Johnson; Astella, Inc.; Sanofi; Ipsen; Bayer AG; AstraZeneca; and Valeant Pharmaceuticals North America LLC (Dendreon Corporation). These major players dominate the market due to their strong brand identity coupled with a wide geographic reach.

This report forecasts revenue growth at global, regional & country levels and provides an analysis of the latest trends and opportunities in each of the sub-segments from 2014 to 2025. For the purpose of this study, Grand View Research has segmented the Prostate Cancer Therapeutics Market on the basis of drugs and region: