The global PTA Balloon Catheter Market size was valued at USD 2.4 billion in 2018 and is expected to register a CAGR of 10.1% over the forecast period. Rising prevalence of cardiovascular disorders and peripheral artery disease, growing geriatric population, and an increasing number of minimally invasive surgeries are some of the key factors boosting the market growth.

Cardiovascular diseases have become the leading cause of death worldwide in the past three decades. A sedentary lifestyle is one of the major causes leading to many chronic disorders such as diabetes and cardiovascular ailments. Harmful habits such as lack of physical activity, consumption of alcohol and unhealthy food, and smoking have resulted in a growing prevalence of obesity, which in turn, leads to various cardiovascular diseases. Surgical intervention for the treatment of such disorders has increased demand for percutaneous transluminal angioplasty (PTA) balloon catheter. According to a research article published by the NCBI in 2018, more than 200 million people suffer from Peripheral Artery Disease (PAD) across the globe. Individuals suffering from PAD are at a higher risk of developing severe heart conditions in the later stages of life. Rising hospitalization with an increase in cardiovascular disorders is expected to increase the adoption of PTA Balloon Catheter. 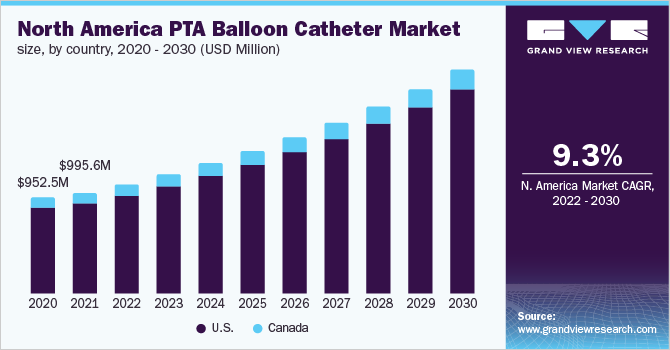 However, catheters are often associated with vein thrombosis, which may lead to pulmonary embolism and, in some cases, may prove to be fatal. Thrombosis can result in obstruction of a catheter, which includes a ﬁbrin sheath around the intraluminal, venous, mural thrombosis at the catheter tip. Patients who undergo cardiac catheterization are at a higher risk of catheter-associated bloodstream infections due to repeated use of catheters. According to a research article published by the NCBI in 2018, some of the major risks associated with cardiac catheterization are myocardial infarction, pseudoaneurysm, arteriovenous fistula, hematoma/retroperitoneal bleeding, thrombosis and embolism, and allergic reactions. Therefore, risks and complications associated with catheters may impede the growth of the market for PTA Balloon Catheters in the coming years. However, they can be overcome with technological advancements.

The global PTA Balloon Catheter Market has been segmented on the basis of region into North America, Europe, Asia Pacific, Latin America, and MEA. North America held the largest revenue share of 35.6% in 2018. This can be attributed to factors such as the presence of a large number of PTA balloon catheter manufacturers, suppliers, and distributors, high prevalence of cardiovascular disorders, presence of sophisticated healthcare infrastructure, and an increase in patient awareness about emerging minimally invasive surgeries in the region. In addition, growing preference for minimally invasive surgeries, such as minimally invasive coronary bypass and Minimally Invasive Cardiothoracic Surgery (MICS), is contributing to market growth in North America. 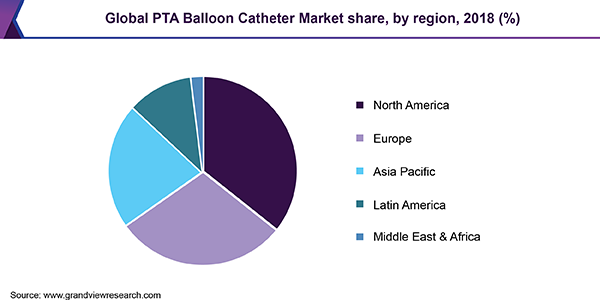 Asia Pacific is projected to register the fastest growth over the course of the forecast period to account for 23.0% of the revenue in 2026. This growth will be fueled by rising consumer awareness about emerging healthcare developments, increasing disposable income, and the presence of untapped opportunities for market players. Companies have the chance to focus on areas such as the development of PTA Balloon Catheter that can reduce catheters-associated risks. Apart from this, rapidly improving economic conditions in emerging countries such as India and China will also benefit market growth. In addition, the booming medical tourism industry and the market for medical devices are expected to have a positive impact on the APAC market.

Key players operating in the market for PTA Balloon Catheter are Medtronic plc; Terumo Corporation; Cardinal Health; Boston Scientific Corporation; Natec Medical; and Surmodics, Inc. Market players are focusing on strategically acquiring local players. For instance, in January 2016, Surmodics acquired NorMedix to strengthen its R&D capabilities and vascular device expertise. Geographical expansion is also seen as one of the strategic initiatives opted by key players in the market for PTA Balloon Catheter. For instance, in October 2017, Medtronic set up the Chengdu Innovation Center in China to facilitate training for local physicians to improve healthcare efficiency in Central and Western China.

This report forecasts revenue growth at global, regional, and country levels and provides an analysis on latest industry trends in each of the sub-segments from 2015 to 2026. For the purpose of this study, Grand View Research has segmented the global PTA Balloon Catheter Market report on the basis of region: