The global rabies diagnostics market size was valued at USD 1.47 billion in 2017 and is projected to expand at a CAGR of 4.1% during the forecast period. Neglected Tropical Diseases (NTDs) have afflicted several densely populated and low-resource setting regions across the globe. One such NTD is Rabies that continues to pose a significant threat to human and animal health, particularly in Asian and African countries.

Several international healthcare organizations are engaged in establishing collaboration with healthcare entities for the development and commercialization of novel detection assays to drive the efforts that target to combat the disease. For example, the World Health Organization (WHO), in collaboration with other healthcare agencies, such as provincial health authorities, is involved in the promotion of research endeavors taken up for rabies control across the globe. The WHO has also released several documents illustrating various aspects of a comprehensive control program for this disease. Such ongoing activities in the rabies testing market are anticipated to fuel the demand for robust diagnostic solutions. 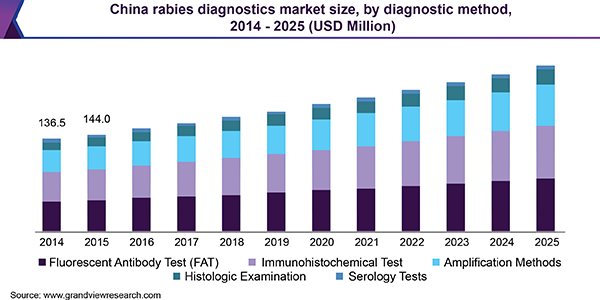 Currently, most of the commercial tests are based on an antemortem diagnosis of human rabies virus. The tests are available across various ranges in context to cost and efficiency. National laboratories prefer internationally recommended tests that employ validated reagents and equipment for virus detection.

On the contrary, smaller and remote provincial laboratories deploy simpler conventional chemical stain tests that cost low. However, the accuracy associated with the use of this test is significantly low. In such cases, the sample that gives negative results at a provincial laboratory is transported to a national laboratory for re-testing.

This, in turn, poses challenges about additional cost requirements and delay in effective control of infection. These challenges have spurred the development of novel solutions to meet the unmet demand of the population, physicians, and entities involved in control programs.

For example, in 2018, LN34 pan-lyssavirus real-time RT-PCR assay was evaluated for its efficiency in post-mortem rabies diagnostics. This LN34 test is considered to be simpler and easier to use. Similarly, in 2017, Rabies Immunoperoxidase Antigen Detection (RIAD) test was developed in Indonesia as a cost-effective and accurate solution. Development of novel tests aimed at improving disease testing in the resource-poor countries as well as developed nations are projected to drive awareness and adoption.

The aforementioned factors contributed to the largest share of the FAT segment in 2017. Furthermore, unlike other conventional methods, this test offers advantages to enhanced specificity and sensitivity. However, amplification methods/nucleic acid detection techniques are expected to emerge as a source of lucrative revenue growth for the market in near future.

However, molecular assays are not recommended for the postmortem diagnosis of rabies on a routine basis as of now; amplification methods/nucleic acid detection techniques are considered as a promising assay. These assays are developed as an adjunct to conventional tests for antemortem and postmortem testing. These test methods enable easy and rapid testing of the samples and have been reported to provide higher sensitivity than the conventional assays. 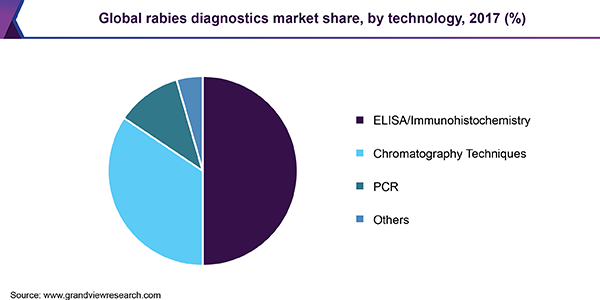 PCR-based methods are expected to witness the fastest growth during the forecast period owing to their capability of performing both antemortem and postmortem rabies testing. Furthermore, real-time PCR based assays are considered as a universal real-time assay for testing of Lyssaviruses.

Rabies occurrence is observed in more than a hundred and fifty countries and territories, but the dominance is marked in Asia and Africa. As per the WHO, annually 31,000 human deaths occur due to rabies in Asia. It also states that over 2,000 deaths are reported each year for a decade in China, which is lesser than those observed in India. These data and statistics have pronounced the need for several control programs thus driving the market growth in the forthcoming years.

Furthermore, the U.S. market is anticipated to grow significantly throughout the forecast period, owing to the substantial use of diagnostic tests in the country. The Centers for Disease Control and Prevention (CDC) states that more than 120,000 animals are tested for rabies annually in the U.S.

Several diagnostic entities operate in the country, contributing to the increased revenue share. On the other hand, in Europe, most of the countries are declared rabies-free. Nevertheless, as per the veterinary records; the U.K. faced re-emergence of the disease from 2000, whereas the country was designated as rabies-free in 1902.

Some companies engage in the development of products for diagnostic purposes, whereas some focus only on product development for research purposes. For example, Abbexa Ltd develops and markets products only for research.

This report forecasts revenue growth at global, regional, and country levels and provides an analysis of the latest industry trends in each of the sub-segments from 2014 to 2025. For this study, Grand View Research has segmented the global rabies diagnostics market report based on diagnostic method, technology, and region: