Radar Market Size, Share & Trends Analysis Report By Component (Antenna, Transmitter, Receiver), By Service, By Platform, By Frequency Band, By Range, By End Use, By Region, And Segment Forecasts, 2019 - 2025

The global radar market size was valued at USD 29.46 billion in 2018 and is expected to register a CAGR of 3.8% over the forecast period. Radar-based equipment are the prominent security equipment employed in the defense sector across all nations. Primarily developed for defense and military purposes, these systems also find extensive use in air traffic, marine, and meteorological monitoring and aircraft anti-collision systems.Technological proliferation is leading to the development of lightweight radars and is positively influencing the market growth.

Radar systems used for digital signal processing help deal with security issues. Moreover, growing safety and security concerns and an increase in defense budgets are likely to propel their demand over the forecast period. Additionally, the development of new airports and terminals across the globe is also anticipated to significantly contribute to the overall growth of the market. The growing terrorist activities, inter-country conflicts, border infiltrations are considerably driving the demand for radar. 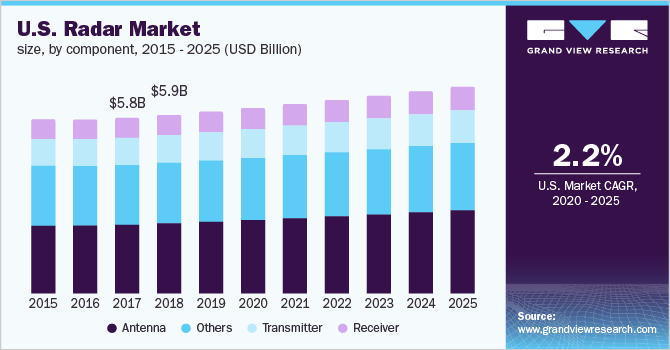 The deployment of radar-based sensors in automobile, railways, and airplanes is increasing. The key advantages of using these sensors for detection include flexible mounting, resistance to extreme weather conditions, and long-range detection. This is leading to mass production of radars. The growth in international sea trade and movement of goods in high volumes are encouraging countries to increase their fleet size and merchant vessels to strike a balance between supply and demand. Radar can be used to track these vessels, and this is anticipated to positively influence the market growth.

On the other hand, airports with a higher number of travelers and cargo are required to consider the use of surveillance radar systems to ensure the safety of cargo and passengers. Hence, airport operators are emphasizing on enhancing runway safety systems and deploying radio detection systems across airports to enable ATC controllers to possess better control over passenger and cargo movement. Current geopolitical scenarios in developing and developed countries are offering a favorable environment for investments by manufacturers to expand their portfolio. This is expected to create new market opportunities in the near future.

Moreover, the introduction of Advanced Driver Assistance Systems (ADAS) in cars and electric vehicles is further stimulating the market growth. On the contrary, technical incompatibilities between the average power of a transmitter and size of an antenna tend to result in poor performance. In addition to this, higher receiver noise and poor sensitivity of radar are the other technical issues affecting the performance of radars. However, technological innovations and developments, coupled with increasing defense budgets, are expected to provide opportunities for the development of advanced detection systems to curb such technical issues.

Based on component, the market is segmented into antenna, transmitter, and receiver, and others. The antenna segment is anticipated to dominate the market over the forecast period. The growth of the segment can be attributed to the growing demand for digital signal processing. Moreover, the increasing deployments of radar systems across the globe and upgrading of the existing systems are anticipated to create a healthy demand for antennas in the global market.

Transmitters are essential in designing a radar system. They produce short-duration, high-power radio-frequency pulses of energy. The pulses are radiated by antennas. The Power Oscillator Transmitter (POT) and Power Amplifier Transmitters (PAT) are the two leading transmitters used for manufacturing radar systems. The market share for transmitters accounted for 16% in 2018 and the segment is anticipated to witness significant growth over the forecast period.

Based on service, the radar market is segmented into installation/integration, support & maintenance, and training & consulting services. The installation/integration services segment is anticipated to dominate the market by 2025. The demand for radar mounting on specialized vehicles and airplanes is likely to increase over the forecast period. This is expected to further contribute to the segment growth.

A radar demands regular & timely maintenance for effective functioning. This is driving the growth of the support & maintenance segment. It is anticipated to accounted for a relatively higher market share by 2025. The segment growth is also driven by the rate of radar deployment and the expected continuation in the trend. Additionally, complex design and functions in radar system necessitate periodic maintenance, using dry-air and liquid cooling systems.

The airborne platform segment was valued at USD 8,866.9 million in 2018. The growth of the segment can be attributed to its need in an aircraft for performing highly sensitive air force missions. Every military mission is to be carried out differently and has different sets of requirements. Different parameters, such as accuracy between distances, range, rate of strike, effect of environment, and the type of target, demand different kinds of waveforms. The growth of the airborne platform segment is also driven by the increasing fleet of commercial aircraft due to the growing air passenger traffic.

The demand for ground-based systems is increasing at a faster rate owing to the need for strengthening cavalry units and locating targets. Lockheed Martin Corporation incorporated the Digital Arrow Row Transceiver (DART) in its series of ground-based antennas. DART was highly compatible with the Line Replaceable Units (LRUs). The latest innovations in next-gen military systems include radiofrequency tiles & gallium nitride transmitters and modular 3D radar.

The X-band segment generated the second-highest revenue in 2018. An X-band radar is mainly used in ships and large vessels for continuous monitoring of an area of sea surface for several square kilometers. Factors such as an increase in the number of sea vessels & offshore installations and increasing use of radars for ship traffic control & navigation are driving the growth of the segment. The segment is expected to hold the highest market share by 2025.

The demand for S-band radars is rapidly growing due to their growing deployments in large antennas and their popularity in maritime operations. These radars are often used for specific applications such as long-range bird detection and for better visibility in precipitation & harsh weather conditions during flight. The demand for an S-band radar is also increasing due to the growing demand for communication satellites. The segment is anticipated to hold a relatively higher market share by 2025.

Based on range, the market has been segmented into long, medium, and short range. The long-range radars are most widely used in the aerospace and defense sector. These radars are deployed to meet surveillance objectives, including weapon detection and target location, in the defense sector. The growing defense expenditure of various economies such as Brazil, Russia, and India is creating market growth opportunities.

A long-range radar is capable of detecting multiple targets simultaneously while carrying out surveillance functions. Long-range air surveillance systems are also capable of detecting targets at ultra-low to high altitudes. Moreover, these systems are available with mobile configurations and can also be deployed in any environment. All these benefits are anticipated to contribute to the segment growth.

The military applications segment dominated the market in 2018. The growth of the segment can be attributed to the need for detection systems used for military entails surveillance, fire control, Air Traffic Control (ATC), weapons location identification, and vehicle search. Earlier, radars were used conventionally in military applications. However, they are now finding applications in industrial, medical, commercial, and automated car systems. 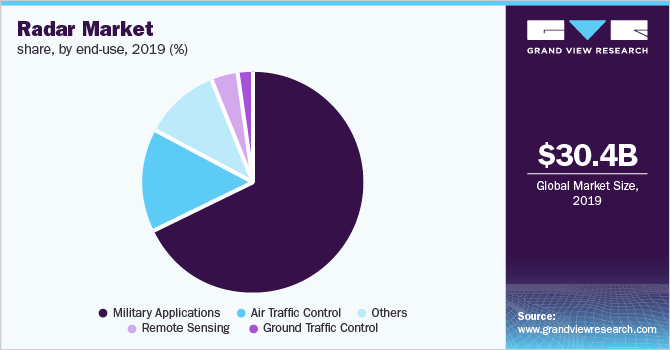 The Asia Pacific region generated the second-highest revenue in 2018. The presence of several SMEs, manufacturing bases, increased radar technology adoption, and growing sea trade are expected to favor the development of radar systems in the region. Availability of funding and investments are expected to further contribute to the regional market growth. Research & development in the defense sector in Asia Pacific is a major ongoing trend. For instance, China has developed military radars that can detect all types of bombers and fighter jets.

North America is expected to witness high demand for radar systems. Quantum radar is being developed in Canada for enhancing the detection of stealth aircraft. This technology helps detect objects with greater accuracy as compared to the conventional systems. It is undergoing trial phases in the University of Waterloo and is expected to be launched by 2025.

Some of the key players operating in the market are Lockheed Martin Corporation; Collins Aerospace; Saab AB; Honeywell International Inc.; General Dynamics Corporation; BAE Systems; Northrop Grumman Corporation; Raytheon Company; and Thales Group. Northrop Grumman Corporation has been an innovative developer of reliable military radar systems used for surveillance. The key manufacturers are engaged in manufacturing and deploying radars used in air and ground traffic monitoring systems. The need to manage air traffic in various countries, coupled with the need for precise information about flight movements, is predicted to create growth opportunities for the players in the market.

This report forecasts revenue growth at global, regional, and country levels and provides an analysis of the latest industry trends in each of the sub-segments from 2014 to 2025. For the purpose of this study, Grand View Research has segmented the global radar market report based on component, service, platform, frequency band, range, end use, and region:

How big is the radar market?

What is the radar market growth?

Which segment accounted for the largest radar market share?

b. North America dominated the radar market with a share of 34.7% in 2019. This is attributable to rising penetration in the space technology segment for remote monitoring of the earth from space and also for the space shuttles to the other planets.

Who are the key players in radar market?

What are the factors driving the radar market growth?

To address the surge of COVID-19, governments all over the world are developing stringent surveillance mechanisms to ensure that people in high-risk zones, or those instructed to be under strict home quarantine. Smartphone apps integrated with geotagging features have been rolled out by various governments to ensure adherence to social distancing. Health surveillance in the wake of this pandemic has essentially become a mic of technology and human intelligence. The updated report will account for Covid19 as a key market contributor.