The global railway wiring harness market size to be valued at USD 5.0 billion by 2027 and is expected to grow at a compound annual growth rate (CAGR) of 8.9% during the forecast period. Wiring harnesses are mainly used for transmitting electric power and signals from the source to the given system safely and therefore is a crucial factor in the railway infrastructure. With the implementation of the wiring harness, safe power transmission with minimum leakages can be assured. 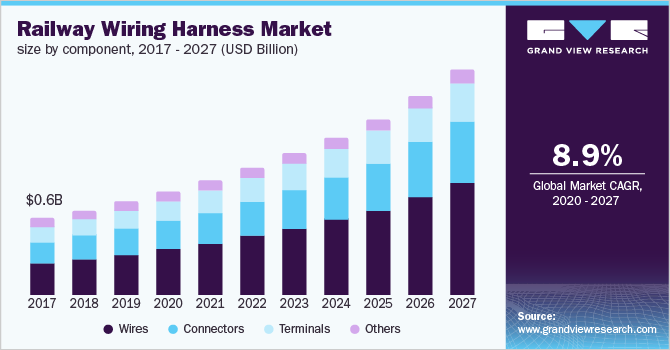 The market is expected to witness significant growth over the forecast period owing to the rising developments and rapid changes in the quest for an increase of economies, energy efficiency, effectiveness, reliability, and quality of railway infrastructure and transport. In addition, advancements in the electrical and mechanical systems used in the railways are expected to bolster the market growth.

Urban rail infrastructure has escalated in the past decade owing to urbanization, growing environmental concerns, and rise in the population. These factors that lead to an increased demand for railway public transportation is anticipated to support market growth. According to UIC (French: Union internationale des chemins de fer; English: International Union of Railways), the worldwide railway organization, the global railway lines was 1.1 million kilometers in 2017 as compared to 1.0 million in 2012. Such developments are expected to have a positive impact on the market.

Moreover, developments to provide better transportation facilities is expected to escalate the market growth. Railway wiring harnesses are widely used to ensure passenger safety and construction of new railway lines are also among the key factors driving the market growth. For instance, Dubai is working on extension of Dubai Metro Red Line, which is expected to be finished by the end of 2020. The Dubai Metro Red Line project cost is estimated to be USD 2.9 billion.

Furthermore, implementation of driverless trains is projected to be a potential opportunity for the market. Developed countries have commenced plans for the driverless train networks, which is expected to develop the transportation sector. Europe and North America are focusing on improving the passenger safety and security by replacing the existing as well as older systems with advanced systems and retrofitting trains. Deployment of driverless trains and retrofitting necessitate extensive amount of wiring, thus creating a huge opportunity for the market. For instance, an initiative named 4th railway package, was started in Europe, which is responsible for the structural and technical reformation of single European rail area.

The expansion of the market is heavily influenced by expanding smart city initiatives and increasing railway projects. Another driver boosting the market is the usage of wiring harnesses for safe power transfer with minimal leakages.  In addition, the growing advances and rapid changes in the race to improve economies, energy efficiency, consistency, and value of rail infrastructure and transportation will drive the industry forward throughout the forecast period.

Growing urbanization, rising demand for expanded public transportation services, and government measures to improve railway connections by developing existing railway infrastructure are the primary factors driving market expansion. In addition, as railways become more common as a source of transportation and logistics, demand for the market is expected to grow.

The unpredictable price of raw materials such as copper, aluminum, and plastic are some of the reasons that limit the growth of the market. Furthermore, due to changes in weather conditions, the wiring system is subject to corrosion, and they run under heavy loads, which might affect their durability. This might cause numerous failures inside the train systems, resulting in downtime or delays which are expected to hamper the industry growth.

The expanding popularity of self-driving trains, and the growing demand for energy-efficient wiring systems, will provide the market with numerous potential opportunities. Also, the increased usage of safety sensors, such as foggy invisibility situations and automatic signal control systems is expected to provide numerous chances to grow.

The component segment has been segregated into electric wires, terminals, connectors, and others. The others segment includes protectors, grommet, clamps, convoluted tubes, and sheaths. Wires segment led the market in 2019 and will retain its position throughout the forecast period. This is attributed to the rising usage of wires in wide range of applications, such as felicitating power supplies and rail signal transmission.

The terminal segment is expected to have a significant growth from 2020 to 2027. Connectors used in railway wiring harnesses are used in vehicles that are integrated with advanced safety systems, such as braking systems and immobilizers. A key factor impelling the sales of railway terminals includes rising development of advanced technologies, including driver assistance systems and safety features.

Major companies in the industry are focusing on introducing technological advancements that will not only ensure improved operations but also result in less energy consumption. For instance, introduction of energy-efficient systems in several train types, such as high-speed/bullet rail, is expected to reduce energy consumption, thereby resulting in increased demand for wires, terminals, and connectors.

Material type segment includes aluminum, copper, and others. As the main function of the wires is to transfer the electrical supply from the source to the available systems, aluminum and copper are mostly used in the wiring harness as both the metals are good conductors of electricity. However, aluminum wires are widely used in power transmission and distribution application across several wiring power grids due to a better conductivity to weight ratio than copper wires. Therefore, it is widely used across the wiring power grids. Furthermore, need for energy-efficient wiring system is crucial as it ensures efficient electricity usage and prevents leakages and short circuits. Hence, the aluminum material segment is expected to be the major shareholder and is expected to maintain its position throughout the forecast period.

Aluminum is also preferred in the production of railway wiring harness since it is light in weight and durable. Applications, such as Light Rail Transit (LRT) and high-speed rail or bullet rail need such lightweight material. Moreover, the material offers high strength as compared to its counterparts. However, easier maintenance can be achieved with copper, due to its corrosion resistance capabilities, which is anticipated to boost its demand over the forecast period.

Low voltage segment led the market with a share of 59.9% in 2019 and will expand further retaining its leading position. This growth is credited to the increasing number of comfort systems, such as music systems, Wi-Fi devices, charger port, and others, in trains. The ability of low voltage to evenly distribute the current from transformer station to information, security, lighting, supervision systems, and cover long distance transmission networks is also anticipated to drive the segment growth. The segment’s growth is also influenced by regional developments.

For instance, the low voltage segment is anticipated to witness a significant growth in the Asia Pacific region owing to rising investments in upgrading the rolling stock technology. The medium voltage segment is expected to expand at a CAGR of over 8.0% from 2020 to 2027. Medium voltage is used to feed the standard power distribution network with a voltage range between 1000V to 25kV. Furthermore, its ability to effectively power information systems of railway networks is anticipated to fuel the segment growth. Its capacity to operate in underground areas, such as tunnels, is also expected to drive the segment growth.

High-speed rail/bullet train led the global market in 2019 and is estimated to retain its position throughout the forecast period. This growth is attributed to rising focus on high-speed rail programs and increasing government initiatives to enhance transportation and modernize railway infrastructure. Furthermore, benefits, such as freight transport and capability & accuracy to cover large geographic areas in short time is also expected to pave the way for high-speed rail/bullet trains.

Several countries are inclined to expand their rail network, which is also expected to drive the segment. For instance, China’s high-speed rail network track is 20,000 km and the country plans to expand its length to over 30,000 km by 2020. Light rail train type is expected to be the second-largest segment over the forecast period. Light rail requires lesser space and thus operates effectively in congested and small towns. Such factors are anticipated to fuel segment growth.

Application segment consists of HVAC, lighting, brake, engine, infotainment, traction system, and others. The HVAC harness segment is expected to be the major shareholder of the application segment over the forecast period. HVAC needs good quality of wiring harness as it needs to combat extreme environment conditions, such as humidity and high temperatures. HVAC harness eliminated the need for large and complex wiring thereby, reducing the maintenance and installation cost of the overall system. 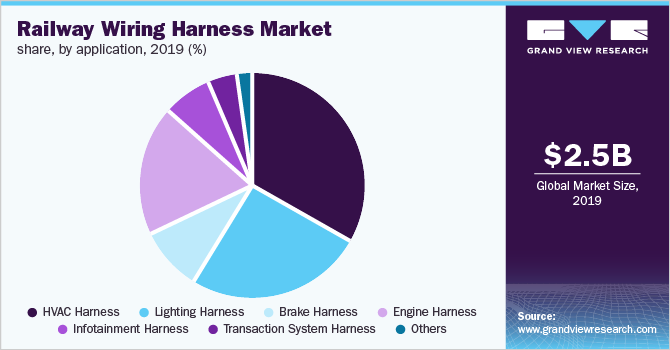 Infotainment harness is expected to register the fastest CAGR during the forecast period. Implementation of infotainment system in railways provides interactive services to the passengers. For instance, in 2016, U.K.-based Virgin Trains initiated entertainment facilities in the railways that enabled the customers to watch movies and TV programs. 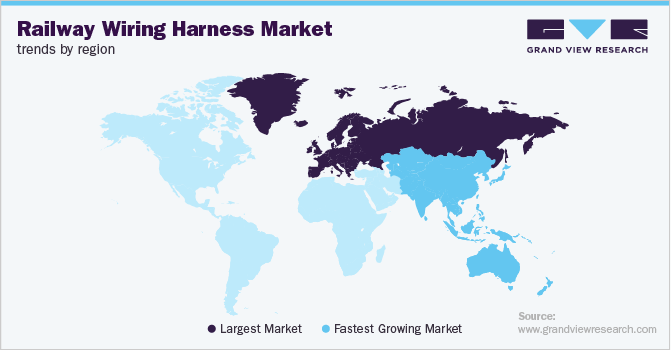 Asia Pacific is projected to be the fastest-growing region due to increasing population and need for better and faster transportation facilities. Various business initiatives undertaken by the governments of various countries in this region are expected to have a positive impact on market growth. For instance, the total rail infrastructure cost of Japan in 2016 was USD 54.22 billion. Moreover, in February 2018, the Indian government-endorsed six new railway projects, in four states, with an aggregate value of USD 1.8 billion. In China, various initiatives, such as “Belt and Road”, have led to significant investments in expanding rail-freight networks between Asian and European countries.

The report forecasts revenue growth at global, regional, and country levels and provides an analysis of the latest industry trends in each of the sub-segments from 2016 to 2027. For the purpose of this report, Grand View Research has segmented the global railway wiring harness market report based on component, material, voltage, train type, application, and region. 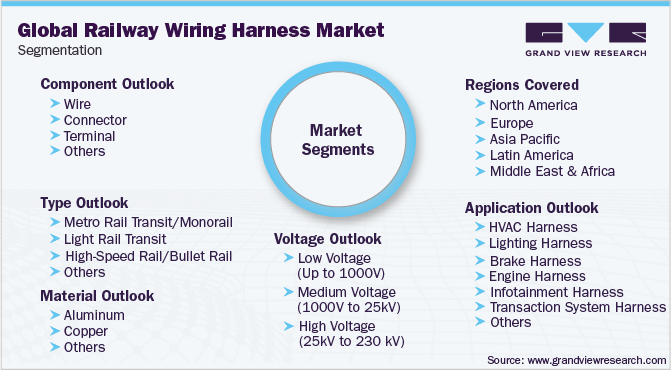 How big is the railway wiring harness market?

What is the railway wiring harness market growth?

b. Europe dominated the railway wiring harness market with a share of 39.9% in 2019. This is attributable to the region's well-established rail base and increasing investments in rail infrastructure.

Who are the key players in the railway wiring harness market?

What are the factors driving the railway wiring harness market?

b. Key factors that are driving the market growth include rising initiatives taken by the governments to improve energy efficiency, effectiveness, reliability, and quality of railway infrastructure and transport.