The global refinery catalyst market size was valued at USD 6.6 billion in 2019 and is anticipated to grow at a compound annual growth rate (CAGR) of 4.7% from 2020 to 2027. The market is expected to grow on account of increasing demand for transportation fuel globally. Stringent regulations coupled with increasing demand for petroleum and petroleum derived products/chemicals are likely to steer market growth. Refinery catalysts are used in the petroleum refining industry to enhance the operational efficiency of petroleum. In addition, the increasing demand for high octane fuel, particularly in countries such as U.S., Japan, Germany, U.K., and India due to stringent regulations is expected to positively influence the growth of the market for refinery catalyst. 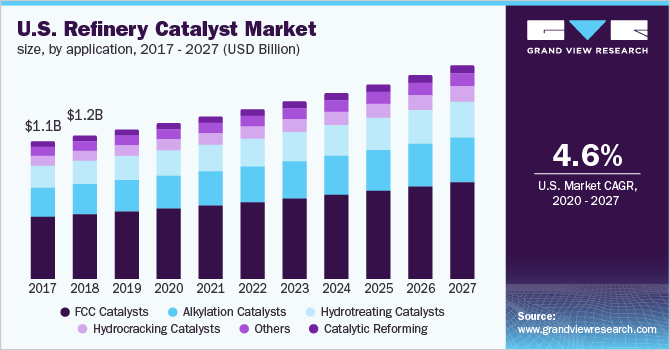 The refinery catalysts are widely used to counter issues such as metal contamination and heat balance effect in tight oil processing. Increasing tight oil production in the U.S., Russia, China, and Argentina is expected to drive market growth over the forecast period. Stringent government regulations including those related to Ultra-low Sulfur Diesel (ULSD) and strict emission standards in mature economies are anticipated to remain the major factors steering demand for refinery catalysts in petroleum refining sector. The availability of alternative fuels such as biofuel coupled with the adoption of “Go Green” campaigns and environmental policies by several nations is expected to restrain the growth of the market for refinery catalysts.

Global manufacturers of refinery catalysts are highly focused towards designing catalysts that can handle all kinds of feedstock and ensure stable, reliable, easy, and profitable hydrotreating and hydrocracking applications. For the same, adoption of superior process designs, proprietary equipment, and innovation of performance refinery catalysts has helped the manufacturers gain a competitive edge over the others. Further, a combination of technical expertise and sustainable approaches to production is increasingly being adopted by the manufacturers.

In terms of revenue, the zeolites segment held a market share of 33.1% in 2019. Zeolites are hydrated aluminosilicate minerals, belonging to the family of microporous solids. They are widely used as adsorbents and catalysts owing to their porosity and large surface area. The porous structure of zeolites accommodates a variety of cations such as potassium (K+), sodium (Na+), calcium (Ca2+), and magnesium (Mg2+). Naturally, zeolites are formed by the reaction of volcanic rocks and ash layers with alkaline water. Natural zeolites are impure owing to the presence of other minerals, metals, and quartz. On the contrary, zeolites are commercially manufactured from the slow crystallization of silica-alumina gel and multiple other atoms incorporated to improve activity and performance in a particular process.

The metal catalyst to be used in the process is selected on the basis of the type of feedstock, desired cycle length, and end product to be obtained. Companies such as Clariant and BASF SE are the major manufacturers and suppliers of FCC and hydrocracking catalysts across various regions. Growing demand of noble and other metals in emerging economies of Chile, China, and South Africa on account of favorable regulatory support for FDI in mineral production is expected to ensure the raw material supply for the manufacturers of metal catalysts. However, the growing demand for these metals in other applications is expected to hamper raw material availability and may hinder the growth of the refinery catalyst market over the forecast period.

FCC catalysts emerged as the largest application segment, accounting for a market share of 45.0% in terms of revenue in 2019. The growth in this segment can be attributed to the growing demand for gasoline as a fuel for its use in automotive vehicles across the globe. Other application-based segments include fluid catalytic cracking (FCC) catalysts, hydro treating catalysts, hydrocracking catalysts, catalytic reforming.

Fluid catalytic cracking is the most preferred method used by refineries to convert heavy and high boiling hydrocarbons to lower valuable fractions. Gasoline is the primary material obtained from the process along with other fractions such as diesel and C3 and C4 gaseous fractions. This process helps produce an additional quantity of gasoline to cater to the high growth in demand in automotive vehicles. The lighter fractions formed in the process are fed to the alkylation unit to produce high octane gasoline component called alkylate and the heavier fractions are used as a blender and an additive in diesel. 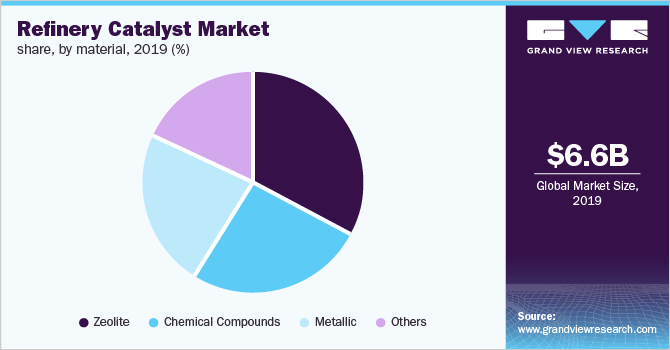 The hydrotreating process also called hydro desulfurization process is used to separate chemically bound sulfur compounds from various petrochemical materials using a variety of refinery catalysts that are selected based on the feed. The process also aids in the removal of other impurities such as metals, oxygen, and nitrogen. This unit is used at multiple stages in the refinery for hydrotreating of various products that include jet fuel, pyrolysis gas, catalytic feed, reformer feed, and other distillates. Hydrotreating is carried out before processes such as catalytic reforming to avoid the contamination of the catalyst by crude feedstock. Also, hydrocracking is used before catalytic cracking to reduce sulfur, enhance yields, and elevate middle distillate petroleum fractions to heating fuel oil, kerosene, and diesel fuel.

Asia Pacific dominated the market and held a revenue share of 30.1% in 2019. China and India were reported as the second and fifth largest countries, respectively, in the market for refinery catalyst in 2019. Increasing number of private sector companies has played a crucial role in promoting the refining industry in the aforementioned countries especially in India. Reliance operated Jamnagar refinery complex in Gujarat had a capacity of 1.2 million barrels per day in 2019, which was the largest refinery in the world. The government of India has approved Petroleum, Chemicals, and Petrochemicals Investment Region (PCPIR) policy for promoting FDI investments in the oil and gas sector. This regulatory move is expected to accelerate the petrochemicals and polymers production in India, thus contributing to the demand for refinery catalysts over the forecast period.

Refineries in Europe are suffering from low margins on account of high manufacturing costs coupled with stringent environmental regulations. This regulatory move in Russia is expected to fuel demand for catalysts in refining applications. In addition, technological development related to enhanced oil recovery and deploying hydraulic fracturing activities in countries including Russia and Ukraine is expected to create an upsurge in the availability of tight oil and shale gas. Increasing shale gas and tight oil availability are expected to allow access of raw materials to refineries operating in Germany, France, and Italy and likely to have a positive impact on the market for refinery catalysts.

European Commission’s inclination towards reducing Greenhouse Gas (GHG) emissions coupled with regulatory bills intended for promoting the biofuels industry is expected to increase demand for enzyme catalysts. The commission also announced Horizon 2020 strategy intended for promoting sustainable development through elevating the industry growth of naturally derived materials by 2020. Governments of Austria, France, Germany, Italy, and Sweden have framed various regulations and policies to promote the use as well as the production of biodiesel, which is expected to fuel market growth over the forecast period.

The key companies supply their products to various application industries including refinery, chemicals, polymer manufacturing, and automobile through numerous distribution channels such as direct supply contracts and third-party supply contracts via vendors and wholesalers. Companies such as Clariant International Ltd., Albemarle Corporation, BASF, Johnson Matthey, and W.R. Grace are integrated into their operations, wherein they manufacture raw materials such as zeolites and chemical compounds that are captively consumed for manufacturing heterogeneous and homogenous catalysts. Some of the prominent players in the refinery catalyst market include:

This report forecasts revenue growth at global, regional, and country levels and provides an analysis of the latest industry trends in each of the sub-segments from 2020 to 2027. For the purpose of this study, Grand View Research has segmented the global refinery catalyst market report on the basis of material, application, and region:

What is the refinery catalysts market growth?

Which segment accounted for the largest refinery catalysts market share?

b. The Asia Pacific dominated the refinery catalyst market with a share of 30.1% in 2019. This is attributable to the increasing demand for hydrotreating and catalytic cracking catalysts, especially in China.

Who are the key players in refinery catalysts market?

What are the factors driving the refinery catalysts market?

b. Key factors that are driving the refinery catalyst market growth include increasing environmental concerns and stringent government regulations for the production of clean high octane gasoline coupled with increasing efforts to improve refinery throughput.

How big is the refinery catalysts market?

b. The global refinery catalyst market size was estimated at USD 6.6 billion in 2019 and is expected to reach USD 6.9 billion in 2020.

With the closure of factories and manufacturing sites, there has been a significant decline in demand for oil, first such instance in a decade. The price war between Russia and KSA has led to much decline in oil prices. Global fuel demand is expected to drop by 15-10% in Q2 due to the halt in air travel and national lockdowns. A number of plants have been shut down and some are running at reduced rates which may thus impact the refinery catalyst demand especially in the Middle East, North America, and Asia. The updated report will account for COVID-19 as a key market contributor.