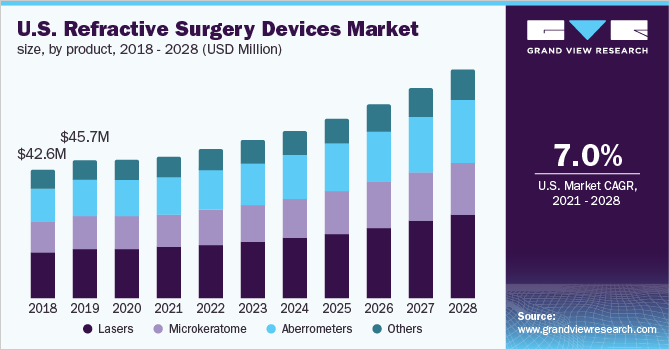 The advent of technologically advanced minimally invasive surgeries, such as LASIK, PRK, and the relatively new, small-incision lenticule extraction (SMILE)is presumed to accelerate the demand for refractive surgery devices during the forecast period. The aforementioned surgeries are accompanied by better patient outcomes that include faster recovery rates, improved safety profile, increased acceptance of refractive surgeries, and various government schemes. Ophthalmic surgical procedures have witnessed significant changes throughout the years, with the introduction of advanced surgical techniques and instruments. The da Vinci system, which is the current standard robotic surgical technology utilized in the area of ophthalmology, is extremely dependable, accurate, and error-free. In low-GDP nations, however, issues such as high prices, poor adoption rates, and restricted product reach are likely to impede the market growth. In addition, the side effects associated with surgeries such as temporary visual problems, like glare, and complications that result in loss of vision may hamper the market growth.

Myopia held the largest share of 27.1% in 2020 and is expected to grow at a moderate rate during the forecast period. The prevalence of myopia is increasing globally at a high rate, with a significant increase in the risks of vision impairment. As per the WHO, countries in which the prevalence of myopia has been estimated and measured as low in the past (e.g. India) will have major increases by 2050. Hyperopia held a significant share in 2020 as it is a frequent refractive disease that affects both children and adults. The frequently used method for medically correcting hyperopia is excimer laser surgery (193 nm).

The high prevalence of presbyopia is likely to drive the market. Presbyopia affects more than 1.1 billion people worldwide, with one-third of those over the age of 50 years. More than 90% of the patients in this pool are from poor nations. As a result, over the projected period, developing countries are expected to have a high demand for myopia and presbyopia correction surgery. The increased occurrence of causal risk factors such as the overuse of contact lenses and extended exposure to digital displays is contributing to the expanding burden of dry eye, thus the market for this segment is expected to witness significant growth.

The lasers segment held the largest revenue share of 34.9% in 2020 owing to the increased usage of laser surgeries for vision correction and technological advancements. The segment will expand at the fastest CAGR from 2021 to 2028.LASIK and other laser refractive surgeries, including PRK and LASEK, are in high demand. This is due to decreasing adoption of eyeglasses or contact lenses for vision correction over refractive surgery due to the high success rate. The Refractive Surgery Council (RSC) strongly started 2021 with a nearly 30%increase in laser vision correction procedures yearly.

The microkeratome segment is expected to expand at a healthy CAGR over the forecast period. The fast expansion of the geriatric population and the rise in the frequency of eye diseases are expected to drive the segment. Furthermore, technological modifications to the blade angle approach, blade's oscillation frequency, and the blade's material have been attempted to improve flap cutting and decrease uneven astigmatism, which is a significant factor fueling the segment growth.

Aberrometers use wavefronts to evaluate total refractive error and have proven to be a valuable tool in ophthalmology, notably in refractive surgery. Ophthalmologists may now accurately and precisely assess more corrective elements of the eye than ever before owing to this technological innovation. Furthermore, advances in wave-front aberrometer devices are likely to be the key factors facilitating the market growth. According to the Centers for Disease Control and Prevention (CDC), around 8 million individuals in the U.S. were diagnosed with refractive error-related visual impairment in 2017. Thus, the growing patient pool and increasing adoption of aberrometer is expected to propel the segment growth during the forecast period.

The hospitals segment held the largest share of nearly 37.0% in 2020. The procurement of ophthalmic refractive surgical devices in these settings due to their longer shelf life is expected to contribute to the segment growth. Increased refractive surgeries, improved healthcare facilities, and favorable reimbursement policies are some of the factors expected to propel the growth of the hospitals segment at a profitable rate over the projected period. Furthermore, the growing number of hospitals in emerging countries and the improvement of existing eye care infrastructure are expanding the market. 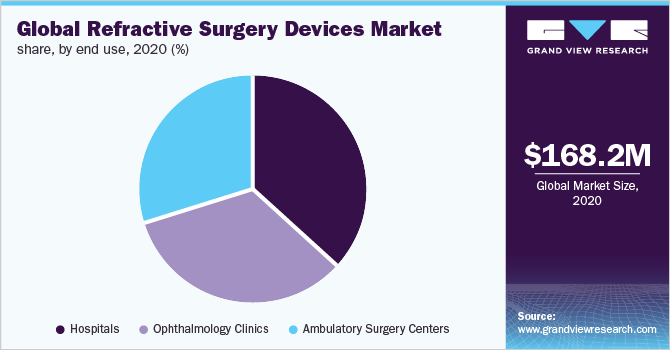 The ophthalmology clinics segment is expected to register a significant CAGR in the forthcoming years due to the increasing number of ophthalmologists and optometrists offering individual clinical services. Moreover, growing incidences and awareness of refractive errors are expected to boost the segment growth.

In 2020, North America held the largest share of over 30.0%. High incidence of refractive errors, the presence of significant market players, and the availability of effective reimbursement policies are expected to contribute to the regional market growth. According to the WHO statistics, the number of people aged 65 years and above in the country is expected to reach 78 million by 2035, which will have a positive impact on product demand. Moreover, the implementation of advanced technologies for the development of surgical products is expected to augment the market growth in the region.

Asia Pacific is expected to grow at the highest rate during the forecast period. According to the World Health Organization, the prevalence of myopia will be significantly higher in high-income countries of Asia Pacific. The need for refractive surgery devices is being driven by recent changes in environmental and lifestyle variables such as air pollution, an aging population, and increased use of phones and computers. Several Western companies have capitalized on Asia's rising need for ophthalmic devices. Carl Zeiss Meditec, Ellex, and STAAR Surgical are among the companies that have established a foothold in several regions of Asia and hope to continue expanding throughout the area. Additionally, in December 2019, Dr. Agarwal's Eye Hospital, a leading eye care hospital chain, said that 60 new eye hospitals will be added in India and other South Asian nations over the next two to three years.

Companies are engaged in various strategies, such as mergers &acquisitions, product launches, partnerships, and joint ventures to gain a greater market share. For instance, in April 2021, Johnson & Johnson Vision, launched ACUVUE Abiliti– a new brand for future services and products to help eye care providers and parents in addressing the growing prevalence and concern of myopia in children. Some prominent players in the global refractive surgery devices market include:

This report forecasts revenue growth at the global, regional, and country levels and provides an analysis of the latest industry trends and opportunities in each of the sub-segments from 2016 to 2028. For the purpose of this study, Grand View Research has segmented the global refractive surgery devices market report on the basis of application, product, end use, and region:

How big is the refractive surgery devices market?

What is the refractive surgery devices market growth?

b. North America dominated the refractive surgery devices market with a share of 34.0% in 2020. This is attributable to the growing number of product launches in the U.S. and the presence of key market players in the region.

Who are the key players in the refractive surgery devices market?

What are the factors driving the refractive surgery devices market?

b. Key factors that are driving the market growth include the rising geriatric population, increased screen time, and technological advancements in refractive surgery devices.