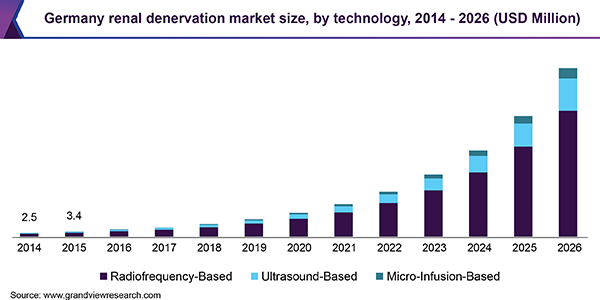 As per the Centers for Disease Control and Prevention (CDC), in 2013, more than 360,000 people in America died due to high blood pressure. The occurrence of hypertension has increased from 17,307 per 100,000 in 1990 to 20,525 per 100,000 in 2015. However, renal denervation therapy has shown a positive result in reducing hypertension. Thus, the advantages offered by these therapies, such as permanent effect, reduced treatment time, and higher safety, are boosting the market growth. Furthermore, the advancement of renal denervation devices is likely to drive the market.

For example, the development of catheter-based interventional therapies to ablate renal nerve has shown impressive results in treating blood pressure in patients having complaints of resistant hypertension. Also, the catheter-based procedure appears to be safer for patients and facilitates the denervation of selected nerves.

Availability of alternative and improved technology, such as micro-infusion, for renal denervation systems and improving healthcare infrastructure in emerging economies, are also anticipated to boost the market growth. For instance, Mercator MedSystem’s micro-infusion based renal denervation system. It delivers agents at a specific site to denervate the renal artery, thus reducing the blood pressure in patients.

On the basis of technology, the market is segmented into radiofrequency, ultrasound, and micro-infusion based renal denervation. The radiofrequency segment held 75.15% of the total market share in 2017, owing to its advantages, such as safety and time efficiency. Ultrasound segment is anticipated to expand at the highest CAGR as it overcomes the limitations of radiofrequency based systems. Ultrasound energy with high-frequency sound waves ablates the nerves without getting in direct contact with the tissues, thus reducing injuries to the renal arteries.

In terms of region, Europe led the renal denervation market in 2017 and is anticipated to maintain dominance even during the forecast period. This is attributed to increasing R&D activities for the development of efficient devices. Increasing cases of drug-resistant hypertension will also contribute to the region’s growth. As reported by the National Center for Biotechnology Information (NCBI), in the U.K., the cases of hypertension have increased from 3.79 cases per 100 people in 2000 to 6.46 cases per 100 people in 2015. Furthermore, device approval in the European region is also anticipated to favor market growth. 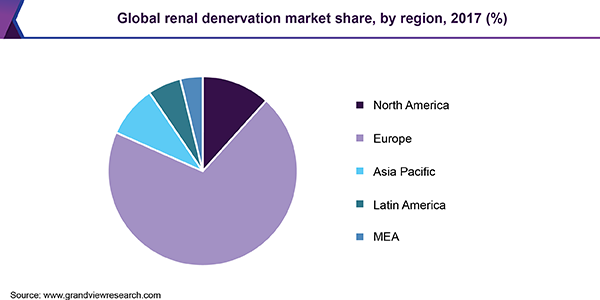 North America is projected to follow Europe, in terms of revenue generation, during the forecast period due to the rising number of filings for FDA approvals in the U.S. For instance, Medtronic has received FDA approval to start an Investigational Device Exemption (IDE) pivotal trial for evaluating the Symplicity Spyral renal denervation system in the patients with hypertension. Increasing the incidence of uncontrolled hypertension is also one of the key factors responsible for the region’s growth.

Asia Pacific (APAC) region is anticipated to witness the fastest growth over the forecast period due to rising cases of diabetes, obesity, and other lifestyle diseases. Moreover, the presence of a large target population base in developing economies like Japan and China are the main drivers for the market growth in APAC.

This report forecasts revenue and volume growth at global, regional, and country levels and provides an analysis of the latest industry trends in each of the sub-segments from 2014 to 2026. For the purpose of this study, Grand View Research has segmented the global renal denervation market report on the basis of technology and region:

How big is the renal denervation market?

What is the renal denervation market growth?

Which segment accounted for the largest renal denervation market share?

b. Europe dominated the renal denervation market with a share of 63.6% in 2019. This is attributable to rising cases of drug-resistant hypertension and technological advancement in the region.

Who are the key players in renal denervation market?

What are the factors driving the renal denervation market?

b. Key factors that are driving the market growth include growing prevalence of hypertension, changing lifestyle of people, and and rising healthcare spending.