The reporter gene assay market size was estimated at USD 4.8 billion in 2019 and is projected to expand at a compound annual growth rate (CAGR) of 8.1% from 2020 to 2027. Increase in demand for cell-based High-Throughput Screening (HTS) assays is expected to drive the market. In addition, rise in the adoption of reporter genes in studying the signal transduction pathways originating from the cell surface receptors also boosts the market growth. Reporter gene assays are considered one of the most frequently adopted cell-based assays for gaining insights into the biological role of target molecules. Therefore, researchers prefer fluorescence assays for real-time analyzing of dynamic processes occurring in the living cells. This can be attributed to the availability of different colored variants of reporter genes, and as cell lysis or addition of any kind of substrate is not required for quantification. 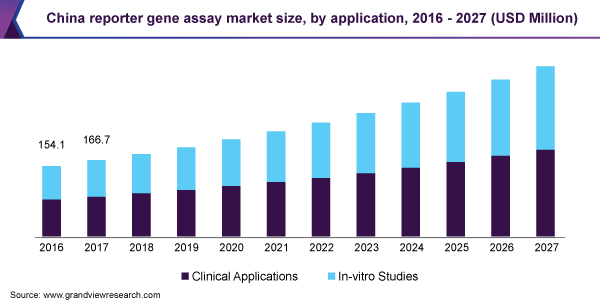 In addition, β-galactosidase and Chloramphenicol Acyltransferase (CAT) are largely incorporated in the HTS of drug targets. A significant increase in the number of research studies targeting drug discovery and development is expected to propel the product adoption, thereby driving the market. Furthermore, reporter gene assays are largely preferred in HTS protocols for the identification of chemical modulators acting in the cellular pathways. Developments regarding the challenges faced by reporter genes in differentiating between targeted compounds in biological pathways and the compounds in the assay protocol are set to propel the demand further.

Luciferase product segment led the market in 2019 and held over 36% of the global share. It is estimated to be the dominant segment over the forecast period on account of extensive usage of these assays as they enable precise measurement of signal, maintaining consistency of the outcomes. In addition, these are convenient, fast, sensitive, and affordable and display a broad linear range for detection.

Adoption of beta-galactosidase as reporter genes can be attributed to its well-characterized enzymatic properties. In addition, rising focus of researchers on establishing high-throughput assays pertaining to β-galactosidase for reporter systems based on bacterial cells contributes to the fastest growth rate of the beta-galactosidase segment.

In addition, a large number of hospitals are collaborating with universities to perform research activities that demand the product use. For instance, in 2019, various hospitals and universities in China collaborated to incorporate a unique androgen receptor-mediated reporter gene assay to study anti/androgenic activities Porcine Aortic Endothelial cells (PAE). 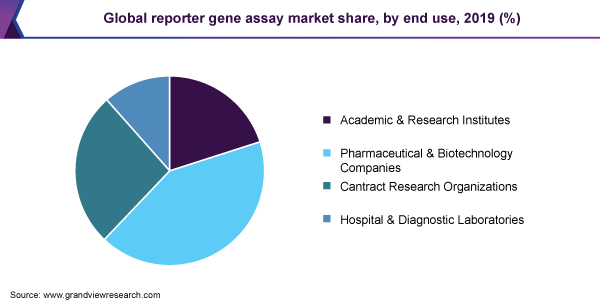 Clinical application segment accounted for the largest share of more than 50% in 2019. In vitro studies segment is estimated to register the fastest CAGR from 2020 to 2027 as the adoption of in vitro reporter gene assays in the field of life sciences is increasing, especially in drug metabolism analysis. However, the technique requires further standardization protocols during process control and result interpretation.

The product has also been used during in vivo imaging. For instance, the expression of the luc gene that codes for firefly luciferase can be estimated by attaching it to a gene of interest and then the measurement of luciferase expression as light. This is performed in vitro by the addition of D-luciferin and ATP to lysed cells.

Researchers have also been studying the utility of in vitro reporter assay systems that can be translated into the first line of screening (T1S) for the diagnosis of anti-androgenic and androgenic activity. These factors make in vitro studies the fastest-growing application segment of the market.

Drug discovery programs accounted for the highest revenue share of more than 58% in 2019. High-throughput assessment studies carried for determining drug ability of targeted compounds have increased in recent years. Reporter genes are frequently utilized in such studies, which is expected to supplement the market growth. In addition, reporter gene constructs have revolutionized the protozoan parasitic transfection studies.

This is because these constructs help in the analysis of cellular host-parasite interactions. This has enhanced the process of developing drug screens for new molecules and drugs that act against parasites. In addition, reporter assays provide a strong basis for the analysis of disease progression; therefore, are increasingly adopted in the drug discovery programs. Cell-based reporter gene assays are used in the phenotypic screening of drug discovery candidates as they can replicate a complex living system.

Thus, they are widely adopted for the screening of the effects of drug candidates over signaling pathways. Despite these benefits, the molecular target approach is still preferred by many pharmaceutical companies as cell-based phenotypic screening may lead to false-positive results. Nonetheless, to overcome the problems, major pharma companies have collaborated with nonprofit research organizations to establish open innovation research programs.

North America was the leading regional market in 2019 and accounted for 52% of the global share. The region will retain its dominant position over the forecast years on account of initiatives undertaken by the biotechnology companies and healthcare facilities to accelerate the development of gene therapies. For instance, in August 2019, Pfizer, Inc. invested USD 500 million to expand its manufacturing plant for gene therapy medicines in Sanford, U.S. This initiative allowed the company to improve its production of highly specialized medicines for the treatment of genetic disorders.

Presence of several programs driven by academic and research institutes in the field of molecular imaging is expected to accelerate the demand for reporter gene assays used for molecular imaging. The Collaborative Graduate Program in Molecular Imaging program provided by Western University, Canada supports students with interests in cell and molecular biology, diagnostic imaging, and chemical probe development.

Asia Pacific market is expected to witness the fastest CAGR from 2020 to 2027 owing to rise in the prevalence of genetic disorders, a large customer base, improvements in healthcare facilities, and increased per capita income. In addition, a rise in funding initiatives, such as the Environment Research and Technology Development Fund (Japan), in Asian countries is expected to boost revenue generation in the region.

This report forecasts revenue growth at global, regional, and country levels and provides an analysis of the latest industry trends in each of the sub-segments from 2016 to 2027. For the purpose of this study, Grand View Research has segmented the global reporter gene assay market report on the basis of product, application, usage, end use, and region:

How big is the reporter gene assay market?

What is the reporter gene assay market growth?

b. North America dominated the reporter gene assay market with a share of 52% in 2019. This is attributable to efforts undertaken by the healthcare facilities and biotechnology companies to accelerate the development of gene therapies.

Who are the key players in reporter gene assay market?

What are the factors driving the reporter gene assay market?