The global ski equipment & gear market size was valued at USD 1.4 billion in 2018 and is anticipated to expand at a CAGR of 2.7% over the forecast period. The market is driven by an increasing number of participants in outdoor sports such as skiing, along with favorable government initiatives in countries, such as India, China, and Japan, on encouraging the population to participate in skiing. 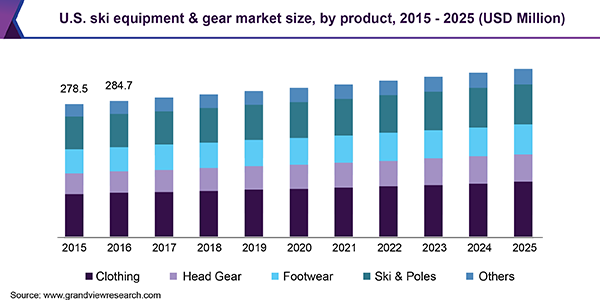 The growing tourism industry may also drive the customers to take part in snow sports including ski. According to the World Bank Group, the international tourist arrivals have increased from 1.24 billion in 2016 to 1.33 billion in 2017. In addition, the number of participants in the snow sports has increased on account of increasing awareness regarding different types of the ski including Alpine skiing, ski touring, and cross-country skiing.

The infrastructure for snow sports, including skiing, is developing around the globe, on account of increasing customer preference for snow-related activities and tourism activities. These favorable trends of developing the snow sports infrastructure are expected to promote the scope of ski equipment and gear products in the near future.

Clothing dominated the market with a revenue of USD 441.2 million in 2018. This growth is attributed to increased acceptance of advanced and new designs of the various types of ski clothing including jackets, ski suit, ski pants, and a moisture wicking base layer. The ski clothes manufacturers are focused on launching and developing innovative products to meet the changing demand and needs of the customers through advanced technology. For instance, in 2016, Helly Hansen launched radar-sensitive pants for skiing. These radar-sensitive pants have updated rescue system, which reflects the location of the person if the skier is trapped in the snow.

Headgear is expected to be the fastest-growing segment, expanding at a CAGR of 3.3% from 2019 to 2025. This growth is attributed to an increasing number of injuries related to snow sports. Considering the safety of the customers, In&Motion has launched a smart ski airbag suit to prevent the skiers from any injuries on collision. The suit detects the movements of the person and expands into an airbag to protect injuries during fall or slip. These new launches by the market leaders on consideration of the safety of the customers are expected to remain a favorable factor.

The online segment is expected to expand at a CAGR of 3.2% from 2019 to 2025 on account of the introduction of various e-commerce portals, which provide value-added services including cashback benefits. Companies such as decathlon.in, snowinn.com, and skis.com are coming up with new online services for delivering the products at the doorsteps of the customers.

Males are the major consumers of these products, accounting for a share of 42.4% in 2018. Increasing awareness regarding skiing as a key part of recreational activity among working-class male adults in developed economies including Germany, France, and U.K. is expected to remain a key trend. 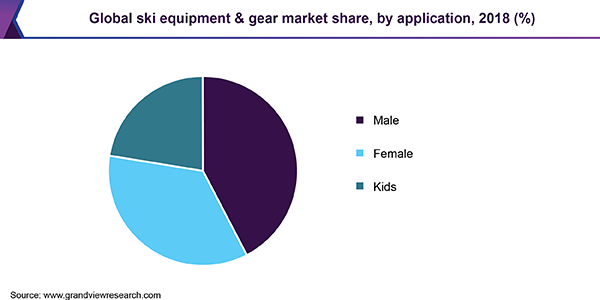 The female segment generated a revenue of USD 478.8 million in the year 2018. Companies including Coalition Snow are developing advanced and safety gear, especially for female skiers. Moreover, females are participating in outdoor sports and activities related to snow for recreational purposes.

North America was the dominant regional market, accounting for a share of 42.4% in 2018. This growth is attributed to the strong foothold of buyers participating in skiing as a recreational activity in countries such as the U.S. and Canada. Moreover, an increasing number of women skiers on account of the introduction of new products and technologies for women safety by the companies is expected to increase the demand for ski equipment and gear in the upcoming future.

Asia Pacific is expected to expand at a CAGR of 3.4% from 2019 to 2025. This growth is attributed to increasing government initiatives on snow-related sports and activities. In 2018, the Get into Snow Sports (GISS) initiative was taken in China. This initiative was launched as a part of the Winter Olympics, which was build-up by the International Ski Federation (FIS) to develop and promote the snow sports globally and to encourage ski in China.

This report forecasts revenue growth at the global, regional, and country levels and provides an analysis of the latest industry trends in each of the sub-segments from 2015 to 2025. For the purpose of this study, Grand View Research has segmented the global ski equipment and gear market report on the basis of product, application, distribution channel, and region:

How big is the ski equipment and gear market?

What is the ski equipment and gear market growth?

Which segment accounted for the largest ski equipment and gear market share?

b. North America dominated the ski equipment and gear market with a share of 42.4% in 2019. This is attributable to the strong foothold of buyers participating in skiing as a recreational activity in countries such as the U.S. and Canada.

Who are the key players in ski equipment and gear market?

What are the factors driving the ski equipment and gear market?

b. Key factors that are driving the market growth include increasing number of participants in outdoor sports such as skiing, along with favorable government initiatives in countries such as India, China, and Japan, encouraging the populace to participate in skiing.