The global skid steer loaders market size was valued at USD 2.15 billion in 2018 and is expected to register a revenue-based CAGR of 2.4% from 2019 to 2025. Globally, around 42 thousand skidsteers were sold in 2018 and the demand is expected to exceed 60 thousand units by 2025. The anticipated growth is attributed to the rise in a number of infrastructure projects worldwide. Additionally, their ability to work in tight spaces coupled with lower operating costs makes them a preferred option at construction and mining sites. 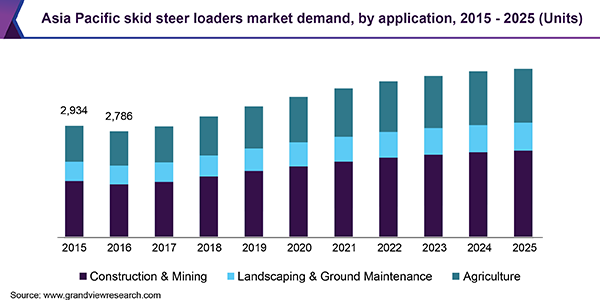 The demand for skidsteers is also anticipated to gain momentum owing to the compact size and versatility offered in operations. Skid loaders are compact and can maneuver in tight spaces which helps in construction activities where large vehicles cannot reach or are difficult to operate. Additionally, these loaders can be outfitted with different attachments such as forks, buckets, hydraulic hammers, auger, stump grinder, trencher, and landscape rake, depending upon the specific task to be performed. Their ability to perform multiple tasks just by changing attachments has positive impact on their adoption across industry verticals.

Skid loaders are popular in North America and are used on a large scale in many construction and mining activities. However, the use of skid steers in other regions is still in the nascent stage. According to the head of sales and marketing, Caterpillar India, high price perception among customers as compared to traditional backhoe loaders is one of the major reasons for the limited adoption of skid steer loaders in emerging economies like India. The company is focusing on creating awareness about the applications and features of its product. Thus, increasing awareness about various applications of the machine is expected to gradually drive the Asia Pacific market.

On the other hand, the demand for skid loaders is facing tough competition from the rising adoption of Compact Tracked Loaders (CTLs). According to data published by ASV Sales & Service, CTLs outsold skidsteers in 2015. However, the growth of skidsteers is expected to be steady over the forecast period owing to better operating costs. The total cost of ownership of skid loaders is less as compared to CTLs due to the high price associated with tracks. Additionally, the CTLs are limited to sandy terrain and are rendered useless on concrete or asphalt surfaces. Thus, low cost of ownership and versatility of usage is anticipated to drive the skid steer loader market growth over the forecast period.

The ability of skid steer loaders to allow use of various attachments makes skid loaders extremely useful on agricultural fields. Depending on the task requirement on-field, a skidsteers can be attached with manure scraper, bale handler, rotary cultivator, seeder, mower, and livestock feed pusher among others. Use of skid steer loaders across multiple agriculture applications is expected to contribute towards the significant growth of the agriculture segment.

The construction and mining segment is expected to witness relatively stronger growth, expanding at a CAGR exceeding 3% from 2019 to 2025, attributed to the increasing construction activities across the globe. North America and Middle East and Africa are investing huge amounts on infrastructure development. Landscaping and ground maintenance is also expected to record significant growth owing to the increasing number of commercial and residential spaces with gardens and lawns.

The 1,251 lbs to 2,200 lbs segment dominated the market for skid steer loaders in 2018, accounting for more than 45% of the volume share. Skid loaders that lie within the ROC range of 1,251 to 2,200 lbs are preferred for landscaping and ground maintenance work and for agricultural operations, especially for small to medium–sized farms. Increasing awareness regarding the benefits offered by skid loaders and resulting adoption is a significant factor contributing to the high market share. 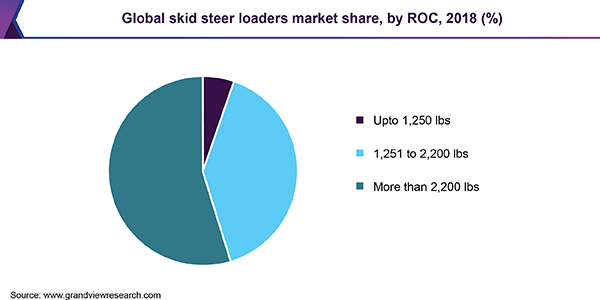 On the other hand, skid loader segment with more than 2,200 lbs ROC is anticipated to register a CAGR of more than 3.5% in terms of volume, over the forecast period. Skid loaders with higher ROC are generally equipped with lower horsepower engine to achieve higher fuel efficiency. However, a machine with ROC of over 2,200 lbs and high horsepower provide cabin comfort by offering air conditioning and joystick control. Thus, the need for comfort and ease of operation is expected to drive demand for higher ROC skidsteers in the next six years.

Asia Pacific is expected to record the fastest CAGR exceeding 4% during the forecast period. The growth is attributed to the rising construction activities in emerging economies such as China and India. Investments made by the governments in view of infrastructural development is driving the demand for construction equipment including skid loaders. Asia Pacific is house to major players, such as Komatsu Ltd., Hyundai Heavy Industries Co., Ltd., and Kubota Corporation among others.

North America dominated the global market for skid steer leaders in 2018 with a revenue share of more than 75%. The region is expected to expand at a CAGR of more than 2% from 2019 to 2025. One of the major reasons for the expected growth is the revival of the construction industry and a rise in the number of landscaping activities. Additionally, the region is characterized by the presence of manufacturers, OEMs, and a large customer base. Companies such as ASV Sales & Services, Bobcat Company, and Caterpillar based in the region are significantly contributing to revenue growth.

The report forecasts revenue growth at global, regional, and country levels and provides an analysis of the latest industry trends and opportunities in each of the sub-segments from 2015 to 2025. For the purpose of this study, Grand View Research has segmented the global skid steer loaders market report based on Rated Operating Capacity (ROC), application, and region: