The global sleep apnea devices market size was valued at USD 3.7 billion in 2020 and is expected to expand at a compound annual growth rate (CAGR) of 6.2% from 2021 to 2028. Sleep apnea is a sleeping disorder, characterized by irregular breathing, thus providing insufficient oxygen to the brain. According to an American Sleep Association study published in 2020, an estimated 50 million to 70 million people in the U.S. are suffering from some form of sleep disorders. Moreover, according to Canadian Respiratory Journal in 2014, around 5.4 million adults in Canada were diagnosed with sleep apnea or were at higher risk of developing OSA. According to a study conducted by ResMed in 2018, around 175 million people in Europe were suffering from sleep apnea. 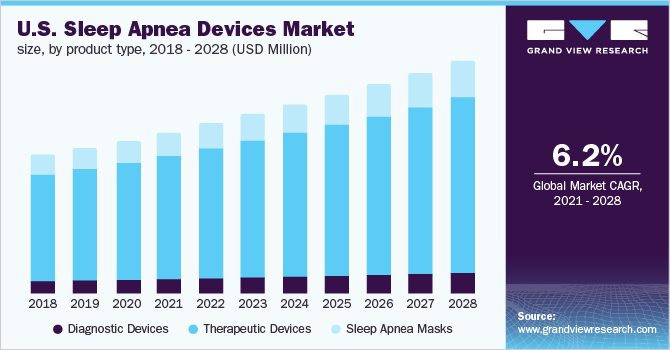 Moreover, people with obesity and hypertension are more likely to develop sleep apnea. As per the analysis made by CDC, the prevalence of obesity in the U.S. is 39.8%, accounting for nearly 93.3 million adults in 2015-2016. According to WHO in 2019, more than 50% of men and women living in Europe were estimated to be overweight. The average obesity rate in the region is 23.3%. Hence, the number of people affected is likely to increase over the forecast period.

In addition, according to Mayo Clinic, men are 2-3 times more likely to suffer from sleep apnea compared to women. As of 2017, the number of men in the U.S. was around 161 million and this number is growing at a rapid rate. Thus, the prevalence is expected to increase in the coming years. The presence of a large patient pool is further expected to boost the demand for treatment devices such as CPAP.

Comorbidities associated with sleep apnea include hypertension, obesity, diabetes, and cardiovascular diseases. OSA is characterized by the collapse of an airway, causing frequent episodes of apnea and hypopnea, which in turn causes irregularity in breathing and results in adverse effects on the body; for instance, it has been found that about 73% of patients diagnosed with episodes of stable heart failure suffer from Sleep Disordered Breathing (SDB). Moreover, it is one of the leading causes of hypertension. The severity of SDB is proportional to the risk of developing hypertension.

The therapeutic devices segment dominated the market and held the highest revenue share of 79.6% in 2020. Therapeutic devices include positive airway pressure devices, oral devices, nasal devices, and chin straps. Increasing awareness about these diseases, the rising availability of technologically advanced devices, the growing number of initiatives by local governments, and adherence to supporting treatment by patients are factors expected to provide lucrative opportunities for SA device manufacturers. This, in turn, is expected to drive the growth of the therapeutic devices segment over the forecast period. 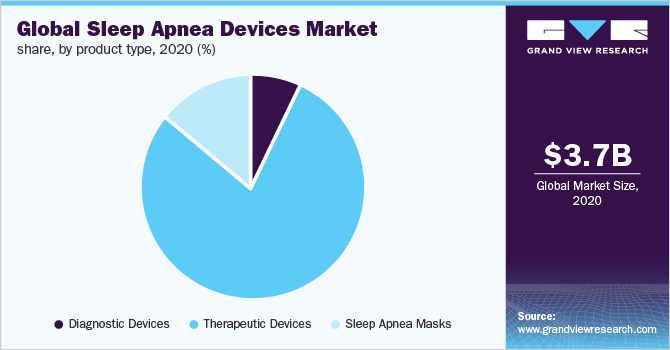 However, the sleep apnea masks segment is expected to grow fast over the forecast period. The adoption of SA masks is increasing owing to the growing prevalence of SA comorbidities and the increasing adoption of CPAP machines for disease management. Technological advancements in SA devices are anticipated to drive the adoption of SA masks. For instance, in 2019, ResMed launched AirFit N30i, its first top-of-head-connected nasal CPAP mask, across the U.S. with a newly designed nasal cradle cushion that sits just under the wearer’s nose.

In 2020, North America dominated the sleep apnea devices market and accounted for the highest revenue share of 49.0%. The rising prevalence of respiratory disorders is leading to some or other form of sleeping disorder, which is driving the market. In addition, growing awareness about sleep apnea, a large patient pool, and the presence of international manufacturers are factors anticipated to strengthen the market share of this region. For instance, key players such as ResMed, Philips Respironics, and Somnetics International, Inc. have established a strong presence in the region and have also established strong distribution channels for easy supply of their products. Moreover, the number of therapeutic tests conducted in the region for confirming the presence of sleep apnea is rapidly rising, as many people are concerned about the health risks arising out of this condition.

However, in Asia Pacific, the market is anticipated to witness a significant growth rate during the forecast period. The rising geriatric population and increasing prevalence of lifestyle diseases are among the key factors driving the Asia Pacific market. For instance, according to the WHO, chronic respiratory diseases, diabetes, cardiovascular diseases, and cancer are some of the major conditions leading to the highest deaths in the region.

In addition, as per the IDF Diabetes Atlas 9th Edition, around 87.6 million people in the age group of 20 to 79 years suffer from diabetes in the South East Asia region. Such a rising prevalence of chronic conditions is expected to increase the adoption of sleep apnea devices in the region. As per a PubMed article, the prevalence of obstructive sleep apnea in Asia in middle-aged individuals ranges from 4.1% to 7.5% in males and 2.1% to 3.2% in females. As per an Asian Pacific Society of Respirology article, in May 2020, the prevalence in APAC countries ranged from 7.8% in Hong Kong to 77.2% in Malaysia, for mild sleep apnea cases. The research study highlighted names of four Asian countries among the top 10, with the highest prevalence of OSA. The countries with prevalence estimate for OSA with AHI > 15 events/hour were China (66 million patients, with a prevalence of 8.8%) and India (29 million, 5.4%).

Fierce competition between market participants to expand their geographic footprints and strengthen their customer pool through several product launches & new product developments are major factors anticipated to drive the market over the forecast period. For instance, In February 2021, Nyxoah SA, manufacturer of Obstructive Sleep Apnea (OSA) neurostimulator device, partnered with Vanderbilt University to create new neurostimulation solutions for OSA treatment. Some of the prominent players in the sleep apnea devices market include:

This report forecasts revenue growth at global, regional, and country levels and provides an analysis of the latest industry trends in each of the sub-segments from 2016 to 2028. For the purpose of this study, Grand View Research, Inc. has segmented the global sleep apnea devices market report on the basis of product type and region:

How big is the sleep apnea devices market?

What is the sleep apnea devices market growth?

b. Therapeutic Devices dominated the sleep apnea devices market with a share of 64.3% in 2019. This is attributable to promising reimbursement guidelines in various countries.

Who are the key players in the sleep apnea devices market?

What are the factors driving the sleep apnea devices market?

b. Key factors that are driving the sleep apnea devices market growth include the increasing number of patients suffering from obstructive sleep apnea (OSA).