The global small caliber ammunition market size was valued at USD 12.09 billion in 2021 and is expected to expand at a compound annual growth rate (CAGR) of - 0.7% from 2022 to 2030. The market is expected to be driven by growing military expenditure and rising hunting as well as sporting activities across the world. The majority of the countries have initiated efforts to expand their military capabilities to counter terrorism and secure their geographical border from rising geopolitical competition. Moreover, some countries are focusing on strengthening their law enforcement agencies to control internal conflicts within the country. These trends are expected to drive the demand for arms and ammunition, thereby bolstering the market growth. 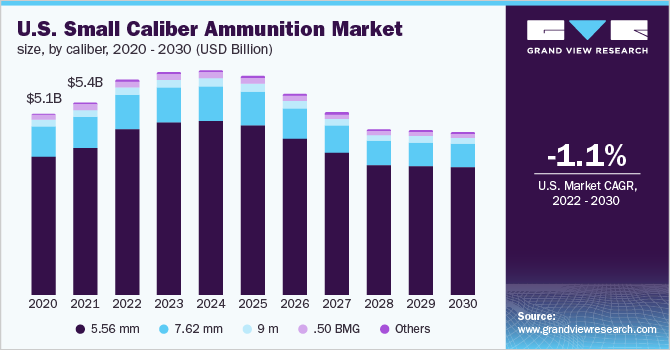 Small caliber bullets accounted for the largest revenue share in the U.S. bullets market n 2021 owing to the increasing utilization of .22LR (long rifle). Furthermore, the U.S. military exhibits the largest demand for 5.56mm caliber bullets for use in M4A1 and M249 weapons, which on average is estimated to be 300 million rounds per year.

Legitimate shipment of arms and ammunition is diverted in various ways apart from retrieving it from active war zone filled with stolen or abandoned weaponry. The subsequent ease of cross-border transactions and communications owing to globalization has contributed to the diversion and smuggling of weapons. This is bolstering the growth of the black arms and ammunition market, thereby challenging the growth of the market for small caliber ammunition.

The industry participants cater to their customers either through direct supply or third-party distributors. Small caliber ammunition intended for commercial and civilian use, including hunting, sporting, and self-defense, are distributed through either B2B or B2C channels. In the B2B channel, the manufacturer sells its finished goods to another business, whereas in the B2C channel, the manufacturer sells its products directly to the customers. 5.56 x 45 mm

The 5.56 × 45 mm segment dominated the market and held a revenue share of over 45.0% in 2021. The 7.62 × 39 mm segment is expected to expand at a CAGR of 2.6% over the forecast period. The product remains popular among military personnel and private gun owners in America. The easy availability and low cost of the 7.62 × 39 mm segment propel its use in hunting. In addition, its high knockdown power, moderate recoil, and weight of around 8 grams further promote its demand.

The 9 mm segment is expected to grow owing to its wide usage in pistols and machine guns. Moreover, the 9 × 19 mm pistol-fired armor-piercing cartridge 7N31 is manufactured to destroy enemies, wearing body armor, behind light covers, in the open, and inside vehicles. It is fired using the 9mm GSh-18 pistol and 9mm PP-2000 submachine gun.

The .50 BMG segment is expected to witness significant growth over the forecast period owing to the increasing procurement of machine guns and sniper rifles. There are several variants of the heavy-hitting .50 caliber that are used in the M2 machine guns and M107 sniper rifles by the U.S. Furthermore, the .50 BMG cartridge has a soft steel-core bullet and is used for practice and in the M2, M3, and M85 machine guns.

The defense segment accounted for the largest revenue share of over 70.0% in 2021 and is expected to dominate the market over the forecast period owing to the increasing demand from prominent military across the globe. Growing demand for the procurement of ammunition in light of increasing political and territorial tensions across the globe is expected to drive the demand for small caliber ammunition.

Continuous upgrading and standardization of the bullets and other small ammunitions used by the defense sector will also result in the growth of this segment. Furthermore, countries are willingly investing in the development of ammunition and weapons for security purposes, thereby adding fuel to the demand for small caliber ammunition. 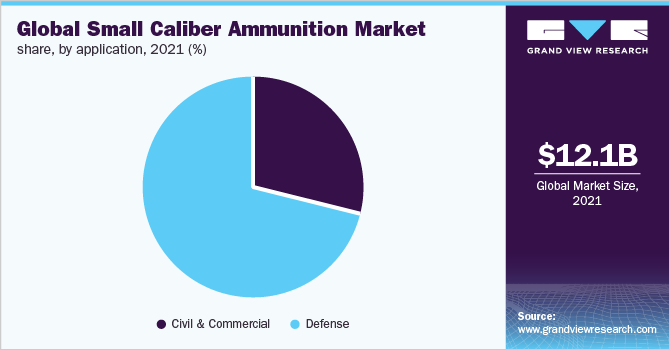 The civil and commercial segment is expected to expand at a significant rate over the forecast period. Furthermore, various types of guns including pistols, shotguns, and rifles are used for civil and commercial applications such as sporting, hunting, and self-defense.

The selection of a bullet differs depending on its application. Small ammunition used for hunting is available in a wide variety and the selection depends upon the type of target. Furthermore, small ammunition used in self-defense is selected considering its effectiveness in stopping the threat and avoiding the risk of over-penetration.

North America accounted for the largest revenue share of over 45.0% in 2021 owing to the high demand for bullets from the U.S. In addition, the defense budget in North America has increased, which is significantly influencing the bullets market in the region. The long-term competitive strategy of the U.S. Department of Defense for the development of technologies and new concepts of warfare is expected to aid the market growth.

The market in the U.S. has witnessed remarkable growth in recent years owing to the increasing product demand from hunters and gun enthusiasts and weapon upgrades by law enforcement agencies. Increased defense spending and flexible legislation regarding the use of guns are expected to have a positive impact on industry growth. 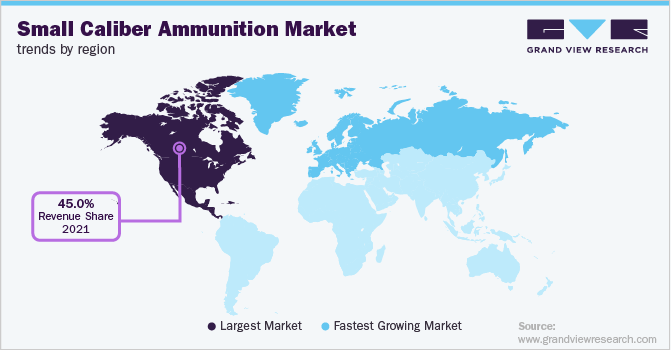 An increase in sports and hunting activities in Europe is expected to fuel the industry demand for small caliber over the forecast period. In addition, in Europe, the market for bullets is driven by the small weapons and arms industry as the demand among civilians for hunting, shooting, and law enforcement is high.

Russia is the second largest exporter of arms and ammunition. India, China, and Vietnam are the countries where Russia dominates the export of arms, and owing to this, it is projected that the bullets market will strengthen its market hold in the coming years. However, in North America and the Middle East, the export is not so high due to high competition from the U.S., which is expected to act as a restraint for the bullets market.

Major players are taking up mergers and acquisitions to ensure competitiveness and profitability and establish a strong foothold in the market. The small caliber players have developed a large customer base through high-quality packaging for brand recognition as well as the development of a broader brand portfolio. In addition, these players have a wider base of retailers and distributors and are also associated with industry OEMs and law enforcement agencies. Some prominent players in the global small caliber ammunition market include:

This report forecasts revenue growth at the global, regional, and country levels and provides an analysis of the latest industry trends and opportunities in each of the sub-segments from 2017 to 2030. For the purpose of this study, Grand View Research has segmented the global small caliber ammunition market report on the basis of caliber, application, and region: 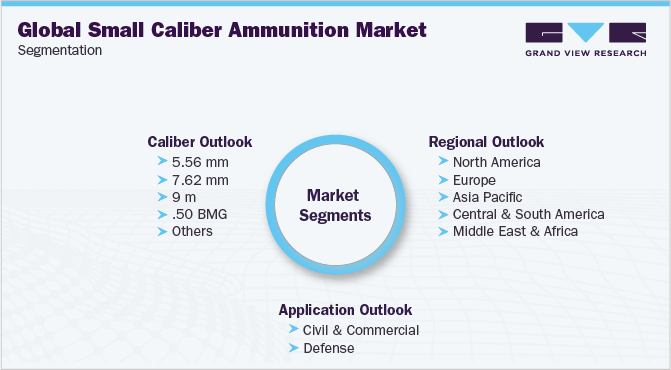 How big is the small caliber ammunition market?

b. The global small caliber ammunition market size was estimated at USD 12.09 billion in 2021 and is expected to reach USD 13 billion in 2022.

What is the small caliber ammunition market growth?

b. The defense sector accounted for the revenue of USD 8.59 billion in 2021 and is expected to dominate the market over the forecast period, owing to the increasing demand from prominent military across the globe.

Who are the key players in small caliber ammunition market?

What are the factors driving the small caliber ammunition market?

b. The small & medium ammunition market is anticipated to be driven by growing defense expenditure, which will consequently drive the market growth. In addition, a rise in hunting and sporting activities are expected to aid the market growth.