The global small hydropower market size was valued at USD 2.07 billion in 2021 and is expected to expand at a compound annual growth rate (CAGR) of 2.8% from 2022 to 2030. Strong growth in the use of renewable sources for energy production is likely to propel market growth over the coming years. Growing investments in smart “energy-saving” across various end-uses are expected to provide an impetus to the adoption of small hydropower energy for electricity generation. In addition, an increase in greenhouse gas emissions due to growing power consumption has fueled the United Nations Industrial Development Organization (UNIDO) and Federal Energy Regulatory Commission (FERC) to adopt certain renewable energy measures. Policies by the Federal Energy Regulatory Commission in order to encourage renewable sources of energy, coupled with the need to deliver energy in rural locations, are expected to foster market growth. 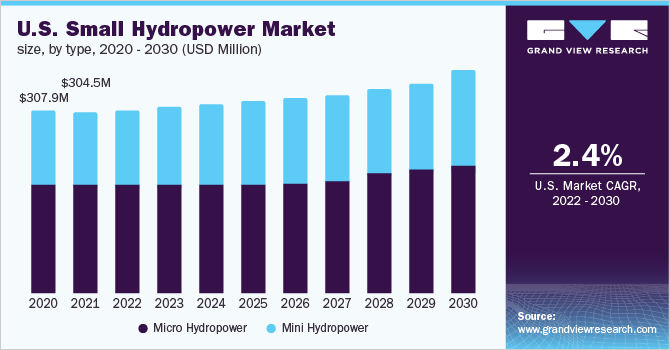 Small hydropower in the U.S. accounted for 60%-70% of the overall consumption in the North American hydropower market in 2021. In the U.S., small hydropower installed revenue was 304.51 million by 2021 and is expected to have the potential of 363.21 million by 2030. Thus, such a high increase in potential, is expected to bolster the growth of the market during the forecast period. According to the International Renewable Agency, the cost of setting up hydropower plants to 1 MW varies in the range of USD 3,400/kW to USD 10,000/kW or more, which is significantly higher compared to larger plants due to depending on-site electricity requirements and location. The rising electricity distribution costs, power outages caused by faults in the main grid, and incentive programs introduced by the U.S. government are expected to propel end-users to shift towards setting up mini-hydropower systems up to 1 MW over the forecast period.

The micro hydropower type segment dominated the share with a revenue share of over 55.0% in 2021. Micro hydropower projects range from less than 1 MW that can provide power for a rural industry or small community in remote areas away from the grid area. Based on type, the market for small hydropower has been segmented into micro hydropower and mini hydropower.

The micro hydropower systems consist of essential components including water conveyance channels or pipelines, turbines, pumps, alternators, regulators, and electricity distribution wiring. Commercially available turbines and generators are being sold as a package and require only the assembling of components, which makes the systems easy to manage and replace. Therefore, low maintenance and easy replacement are expected to result in increased market opportunities for micro hydropower.

Up to 1 MW led the market and accounted for over 55.0% share of the global revenue in 2021. They are set up in geographical areas having flowing water through great mountain ranges and their foothills. They are either used as stand-alone systems or, more often, as systems feeding into the grid. The hydropower system of 100 kW capacity is used to power the rural industries, small communities, or remote areas away from the grid. On the basis of capacity, the global market has been divided into Up to 1 MW and 1-10 MW. 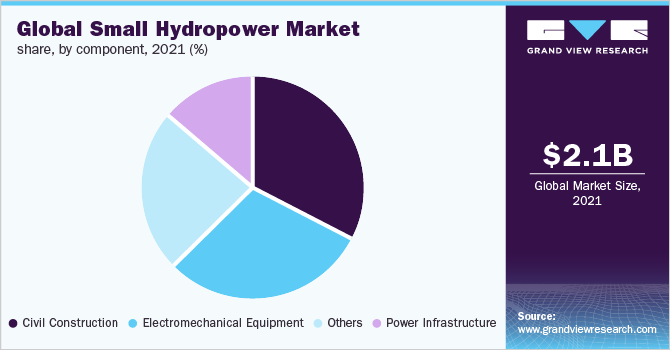 Asia Pacific dominated the global market in 2021 and accounted for a revenue share of over 35.0%. The market in this region is led by China, Japan, and India. The reduction in renewable energy costs and the decrease in infrastructure costs promote the rapid production of small hydropower plants in the region, leading to the increasing adoption by mini and micro small hydro facilities in the Asia Pacific. The Asia Pacific market is expected to grow during the projected period owing to the investments in off-grid energy generation and rural electrification.

Europe accounted for the second-largest revenue share in 2021. Russia held the largest share in the European market in 2021. Factors including growing concerns over greenhouse gas (GHG) emissions and increasing generation costs through non-renewable resources are projected to drive the adoption of small hydropower over the forecast period. The rising population, coupled with the increasing demand for efficient and clean energy, is expected to propel market growth. The availability of funding in the European Union for energy conservation and energy efficiency projects has been one of the major factors driving the regional market growth.

The market is characterized by the presence of several key players and a few medium and small-scale regional players. Many of the companies have their own sector that they focus on and have a very high penetration in that sector. For instance, on October 22, 2021, Voith Group and Siemens Energy mutually agreed that Voith Group will buy the stake of Siemens in the former Voith Siemens Hydro Power Generation GmbH & Co. KG. This is expected to give Voith Group complete ownership of Voith Hydro and strengthen its core business in the field of renewable energy technologies owing to the growing role of hydroelectric power in the renewable energy market. The complete transfer of the stake is expected to close by the end of the first quarter of 2022. Some prominent players in the global small hydropower market include:

This report forecasts revenue growth at the global, regional, and country levels and provides an analysis of the latest industry trends and opportunities in each of the sub-segments from 2019 to 2030. For the purpose of this study, Grand View Research has segmented the global small hydropower market report based on capacity, component, type, and region:

How big is the small hydropower market?

What is the small hydropower market growth?

Which segment accounted for the largest small hydropower market share?

b. The Asia Pacific dominated the small hydropower market with the highest share of 37.13% in 2021. Factors such as versatility, low investment costs, and a large supply of water resources in the region support the growth of the market during the forecast period.

Who are the key players in the small hydropower market?

What are the factors driving the small hydropower market?

b. Key factors driving the small hydropower market growth include financial investments, rural electrification, & policy initiatives in small hydropower projects in response to climate change that will drive the market.