The heightened need for faster data transmission has also played an instrumental role in increasing the demand for smart antennas in the last few years. Benefits provided by smart antennas include multiple access interference, range extension, power control, reduction in the fading of signals, and multipath management. A smart antenna enhances the overall performance of wireless communication. 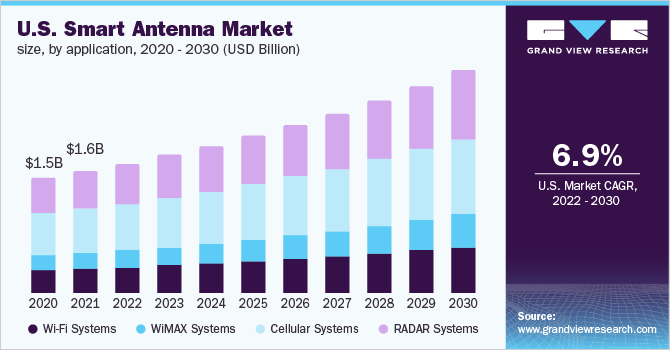 Smart antennas allow the customization of data signals according to user needs, which enhances work efficiency. Demand for smart antennas is expected to gain further traction due to rapidly developing economies that require the latest technologies. However, high manufacturing and maintenance costs are anticipated to restrain the growth of the market.

Smart antenna implementation involves several technical issues. Costs associated with engineering and maintenance are also high. Costs of smart antennas increase with a rise in capacity per base station.

The WiMAX systems segment is estimated to be the fastest-growing segment over the forecast period. The system enables the management of fixed and mobile communication devices by providing more flexibility to operators. Additionally, it helps in reducing the interference of narrow beam operation. The Wi-Fi systems segment is poised to witness substantial growth during the same period owing to the increasing usage of smart devices and wireless networks.

On the basis of technology, the smart antenna market has been divided into SIMO (Single Input Multiple Output), MIMO (Multiple Input Multiple Output), and MISO (Multiple Input Single Output). The MIMO segment is poised to expand at the highest CAGR over the forecast period due to its ability to offer facilities of both MISO and SIMO. MIMO is highly preferred, as it does not incur any additional costs of bandwidth and transmission of power. 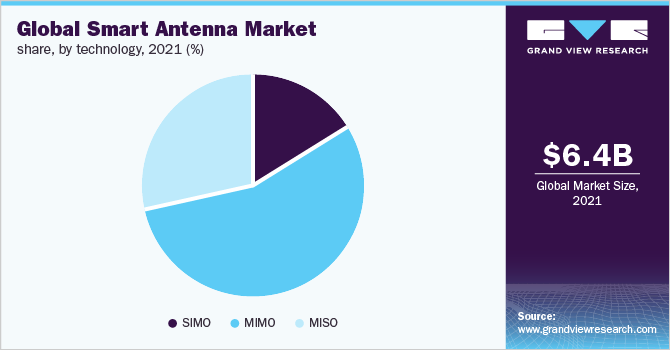 The MIMO segment is followed by the SIMO segment. The growth of the latter can be attributed to its wide usage in wireless local area networks (WLANs), digital communication systems, mobile communication systems, and metropolitan area networks (MANs). MISO technology is used to reduce errors and enhance the speed of data transmission, along with enabling the customization of signals.

North America dominated the market in 2016. The trend is anticipated to continue over the forecast period owing to the presence of high-quality wireless communication systems and a flourishing market for smartphones. The region has significantly contributed to the adoption of smart antennas due to the presence of strong players. Early adoption of the latest technologies in various sectors and rapid developments has also contributed to the growth of the market in North America.

The market is expected to witness significant growth in developing countries of Asia Pacific, Latin America, and Middle East & Africa. Governments in these regions are increasing investments in advanced technologies and initiatives such as IoT and smart cities, which will require enhanced networking infrastructure. These regions are also observing a significant increase in smartphone adoption and internet penetration. These factors will supplement the growth of the market in the regions.

Dominant market players have adopted mergers & acquisitions, expansions, and partnerships as part of their key strategies to strengthen their position in the market. For instance, in 2017, Airgain Inc. acquired Antenna Plus to enhance its mobile and automotive fleet applications in government, public safety, and industrial IoT domains. In 2016, Motorola Solutions, Inc. acquired Spillman Technologies, a move that helped expand the former’s software portfolio.

This report forecasts revenue growth at the global, regional, and country levels and provides an analysis of the industry trends in each of the sub-segments from 2014 to 2025. For the purpose of this study, Grand View Research has segmented the global smart antenna market report based on application, technology, and region: