The global smart coating market size was estimated at USD 1.30 billion in 2016 and is expected to grow substantially over the forecast period on account of the increasing product demand from various end-user industries such as automotive, military, aerospace, and healthcare. The rapidly rising need for self-healing coatings for automotive exterior applications is expected to stimulate growth.

The rapidly increasing product penetration in aerospace and construction applications, owing to the improved and advanced product properties, is expected to drive industry growth. The increasing construction activities in emerging economies across the globe are projected to have a positive impact on the demand for the products over the next eight years. 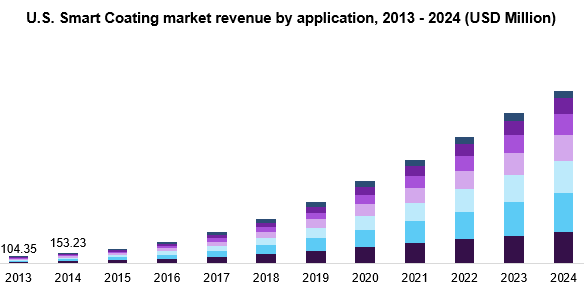 These coatings exhibit advanced chemical and mechanical properties such as anti-corrosive, self-healing, and self-assembling as compared to conventional coatings. These properties enable the coating to respond to environmental changes, including temperature, pressure, pH, thus promoting its use in the aerospace industries. The rising demand for advanced materials in the aerospace, military, healthcare, and textile industries is estimated to propel the overall growth during the forecast period.

The key challenges faced by the industry include environmental regulations and high raw material costs. In addition, the increasing demand for raw materials such as metal oxides from other industries such as cosmetics, personal care is likely to impact raw material availability over the next eight years.

Furthermore, growing environmental concerns over the use of nanomaterials coupled with the development of eco-friendly coating is expected to be a major restraint over the forecast period. The anti-corrosion coating platform recently developed by AnCatt is a major example of environmental-friendly coating products. This technology has been observed to be cost-effective, with self-healing and lightweight properties, compared to other products in the segment.

The study on smart coatings has been segmented based on coating type, end user, and region. The market has been segmented based on coating type into single layer and multilayer. Single layer coatings are increasing in demand owing to the development of multifunctional single layer coatings; multilayer coatings are primarily used in automotive, aerospace, military, and healthcare end-user segments, among others. The smart coatings market has been further segmented in terms of end user into automotive, aerospace, construction, consumer electronics, military, and healthcare, among others. The regional analyses of the smart coatings market include North America, Europe, Asia Pacific, Latin America, and Middle East & Africa. Market estimates and forecasts are represented in terms of revenue (USD million) for a period ranging from 2013 to 2024 with forecast years from 2016 to 2024.

Construction dominated the application segment with an overall share of 23.0% in 2015, however, the segment is likely to lose share over the forecast period on account of the increasing product demand from other end-use industries.

Aerospace is expected to witness the highest growth on account of the rapidly rising product penetration. The application of smart coats on aircraft enables damage indication on an aero engine, while application of the composite form can help in weight reduction of aircraft. In addition to enhancement of aesthetics, the self-healing, self-cleaning, anti-corrosion, anti-inflammatory, and protective functions of smart coatings have resulted in significant demand for coatings in airplanes, components of aircraft, and spacecraft.

The automotive segment was valued at USD 139.6 million in 2015 and is expected to witness significant growth over the forecast period primarily driven by the growth of the automotive industry in the Asia Pacific region, wherein rapidly increasing vehicle production owing to increased income levels have driven the demand for advanced automotive systems. This phenomenon is expected to drive the demand for smart coatings in automotive applications. Self-stratifying coating is gaining preference in the automobile industry due to resource and cost-related challenges involved in the application of second coating on automobile parts.

Multi-layer coatings accounted for the largest share of 51.5% in 2015 and is expected to gain market share over the forecast period on account of the increasing use of multiple layer coats primarily for exterior applications in automotive, and aerospace. 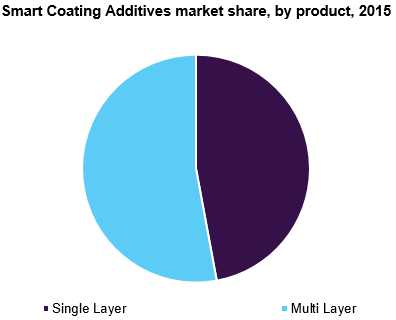 Growing automotive sector primarily in developing countries across Asia Pacific is expected to drive market growth over the forecast period. In addition, the extensive research and development and technological advancements for the production of multi-functional coatings are expected to act as key drivers for the growth over the next eight years.

Europe dominated the global market in terms of both volume and revenue, followed by North America. This can be attributed to the presence of key manufacturers and suppliers of coatings and materials, and huge investments in research & development for development of new and innovative coating options.

Asia Pacific is projected to witness the highest growth during the forecast period, growing at a CAGR of 38.6% from 2016 to 2024. This can be attributed to the rapidly growing vehicle production in emerging economies of India, China, Indonesia, and Malaysia.

Furthermore, high rate of infrastructure development; construction; high demand for consumer electronics; and rising demand from military for coating with artificial intelligence and anti-corrosive properties; among others. Furthermore, rising infrastructure spending in the region coupled with robust manufacturing sector growth is expected to be a key driver for the industry.

The industry in North America is expected to witness higher growth than Europe due to the increasing technological advancements in the field of nanomaterials, combined with new product developments compliant with the environmental regulations in the region.

The market is highly competitive owing to the presence of a large number of manufacturers and suppliers including Bayer AG, PPG Industries, BASF SE, DuPont, The Dow Chemical Co., 3M Company, and Dow Corning Corporation.

The market is expected to witness robust growth owing to industry players adopting strategies such as mergers & acquisitions (M&A) to strengthen and sustain their position in the market. For instance, In April 2016, Lubrizol Corporation introduced Estane VSN 9000, an innovative optical coating with self-healing characteristics and chemical resistance, primarily designed to improve the aesthetics and performance of high-end eyewear frames. In June 2016, PPG Industries announced its acquisition of Metokote, another supplier of products and related services headquartered in Lima, Ohio.