The global smart pole market size was valued at USD 6.45 billion in 2020. It is expected to expand at a compound annual growth rate (CAGR) of 19.7% from 2021 to 2028. The smart pole merely hosts the major digital infrastructure which includes intelligent lights, cameras, communication devices, weather monitoring systems, signage, announcement speakers, and an optional EV charger. Smart poles can facilitate intelligent city management, and, other applications. Initiatives being pursued by various governments worldwide to roll out intelligent transporting systems, intelligent advertising systems, and environmental monitoring systems, among other intelligent systems as part of their smart city development plans are particularly expected to drive the growth of the market over the forecast period. 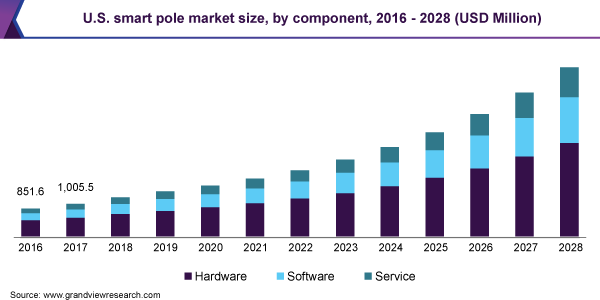 Smart poles are also being installed for hosting the charging infrastructure for electric vehicles. For instance, in June 2020, 15 smart poles were installed in the German city of Essen to serve as an electric vehicle charging point. The rising sales of electric vehicles have triggered the need for enhanced EV charging infrastructure and the demand for smart poles with EV charging technology is growing subsequently. With the help of software, smart poles possess the ability to regulate dimming and brightness depending on ambient light conditions and time of the day. In addition, the growing adoption of LED lights has significantly reduced the consumption of energy in cities. Thus, the rising demand for energy efficiency is significantly driving the demand for smart poles.

The continued rollout of smart city projects across the world is emerging as one of the major factors driving the demand for smart poles. According to SmartCitiesWorld, a publishing company, smart city spending increased 20% over the year in 2020. Various companies across the world are aggressively developing smart poles for smart cities. For instance, in December 2020, Siklu, a provider of Fixed 5G millimeter wave solutions for smart city, security network, and Gigabit Wireless Access, in partnership with Schreder, manufacturer of the outdoor lighting system, announced the initiative to create a wireless smart pole named “SHUFFLE Wireless Backhaul” for smart cities.

The increasing deployment of smart streetlights in various cities worldwide is propelling the growth of the market. In 2018, Philips Lighting and American Tower a wireless infrastructure provider announced that Huntington Beach a city in California will provide citizens high-quality LED lighting and high-capacity mobile connectivity with the developed Smart Fusion Poles by the companies. This Smart Fusion Pole will provide the infrastructure required for wireless broadband connectivity in a street light pole that blends seamlessly into an urban landscape. Similarly, in September 2017, the Dubai Electricity and Water Authority announced a deal with Ragni Group, a lighting company based in France, to design and implement smart poles for smart cities.

The outbreak of the COVID-19 pandemic leading to the economic slowdown in countries worldwide has negatively impacted market growth. However, the smart poles deployed with cameras were used to monitor social distancing in different countries during the lockdown. For instance, the smart poles installed by Vadodara Municipal Corporation (VMC), the municipal corporation of the city of Vadodara in the Indian state of Gujarat, in partnership with Indus Towers in 2018 played a vital role in keeping people safe during the pandemic situation. The smart poles and fiber network allowed VMC to create awareness about the pandemic situation by providing information on a real-time basis via Variable Messaging Displays. The smart poles integrated with the Command-and-Control Centre also enabled authorities to capture data from cameras installed across the city to monitor the activities related to COVID-19 and the adherence to restrictions.

The hardware segment dominated the market in 2020 and accounted for a share of more than 57.0% of the global revenue. Nowadays, smart poles are embedded with air quality sensors to help in monitoring the ambient air quality in cities. Various air quality sensor providers are aggressively developing sensors for smart poles. For instance, in January 2020, Signify, an electrical and electronics manufacturer, presented its BrightSites Smart Poles at the Smart City Expo World Congress convened in Barcelona, Spain. BrightSites Smart Poles feature technology developed by Kunak Technologies, a wireless sensor network provider, for monitoring air quality and noise quality in smart cities.

The solution segment is anticipated to register the fastest growth over the forecast period. The demand for smart poles is rising owing to the benefits, such as a reduction in maintenance cost and energy consumption, they can potentially offer. The segment is expected to grow over the forecast period in line with the growing number of installed smart poles globally. According to a study conducted by the Northeast Group, worldwide total smart pole installation is expected to increase from around 317 million in 2020 to 363 million by 2027.

The controller segment dominated the market in 2020 and accounted for a share of more than 29.0% of the global revenue. Conventional controllers are configured in smart poles to operate in a preprogrammed manner. The controller switches on/off the light according to the user-defined settings. These controllers are implemented in a simple control circuit that works on a processor consisting of one or more associated circuits, programmed microprocessors, or sensor inputs. The controllers are implemented inside the smart poles and are used to operate streetlights in various modes according to the time, environment, and traffic factors.

The lighting lamp segment is expected to register the fastest growth over the forecast period. Smart lamp poles can perform the basic lighting functions while reducing the public expenditure required to provide Wi-Fi or 5G connectivity, intelligent lighting, security monitoring, and electric car charging, among other facilities. Smart LED light poles are being installed in several cities across the world. For instance, in February 2019, San Diego, a city in the U.S. state of California, with partners, such as GE, worked on deploying intelligent sensor nodes on street light poles. The technology from Current, powered by GE and Intel is deployed in 2,000 smart nodes.

The retrofit installation segment dominated the market in 2020 and accounted for a share of more than 59.0% of the global revenue. The growth of the segment can be attributed to the smart city initiatives being pursued by various governments to install digital signage, Wi-Fi hot spots, security cameras, and environment monitoring systems on existing light poles. Meanwhile, the existing street poles are being replaced with enhanced LED lamps working on solar power. For instance, in June 2020, Signify, a smart lighting company, proposed a replacement of approximately 500,000 streetlights in New York, U.S. with new LED technology by 2028.

The new installation segment is expected to register the fastest growth over the forecast period. The growth of the segment can be attributed to the continued installation of smart poles across various countries worldwide. For instance, in May 2020, Sumitomo Corporation, an investment management company, announced an agreement with the Tokyo Metropolitan Government for trial installation and verification of the smart poles being installed by the government. The agreement envisaged Sumitomo Corporation together with NEC Corporation, an information technology company, installing smart poles of two types in Tokyo’s Nishi-Shinjuku area by the end of June 2020.

The public places segment dominated the market in 2020 and accounted for a share of more than 39.0% of the global revenue. Several cities across various regions, including North America, Europe, Asia Pacific, and Middle East and Africa, are increasingly deploying connected streetlights. According to a study conducted by IoT Analytics GmbH, in 2018, 500,000 connected streetlights in the U.S. state of Miami and 280,000 connected streetlights in Paris, France. The growing government initiatives to reduce the cost of technologies, reduced carbon dioxide emission, among others, are some of the major factors driving the segment growth. 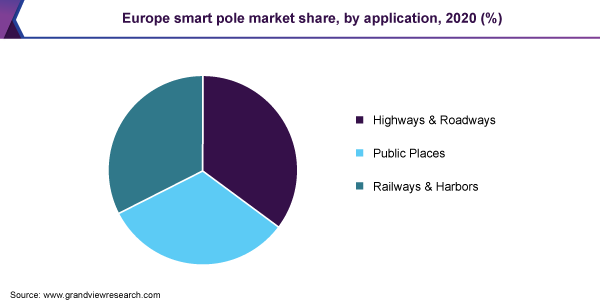 The highways and roadways segment is anticipated to register the highest growth over the forecast period. The growing number of smart roads being developed across the globe is expected to emerge as one of the major factors driving the growth of the segment. In countries such as India, transport authorities are installing SmartLife poles on hairpin bends and sharp turns to avoid accidents on blind turns. These poles use electromagnetic waves and radar sensors to determine the speed of vehicles and alert the drivers about the cars coming from the opposite direction.

Asia Pacific is expected to emerge as the fastest-growing regional market over the forecast period. The continued increasing deployment of smart poles in countries, such as China and India, is expected to contribute to the growth of the regional market. Governments of various Asian nations are increasingly investing in smart city projects in current days. For instance, China invested USD 77.40 billion in the National Smart City Program to deploy big data, IoT, cloud computing, and other smart systems. The continued rollout of smart city projects bodes well for the growth of the regional market.

The market is highly fragmented in nature. The key players in the market are pursuing various strategies, such as new product development, R&D initiatives, and strategic partnerships to cement their position in the market. Market players are also offering software and products for smart poles as part of the efforts to strengthen their foothold in the market. Having realized that smart poles are particularly deployed in public areas, market players are trying to offer enhanced products.

Market players are particularly focusing on enhancing their product offerings in line with the evolving needs of end users to stay competitive. For instance, in February 2019, Hikvision announced the launch of Smart Poles for Smart Infrastructure solution. These smart poles provide security and safety solutions to keep public areas secured. Some of the prominent players in the market are:

The report forecasts revenue growth at global, regional, and country levels and provides an analysis of the latest industry trends in each of the sub-segments from 2016 to 2028. For this study, Grand View Research has segmented the global smart pole market report based on component, hardware, installation type, application, and region:

How big is the smart pole market?

What is the smart pole market growth?

Which segment accounted for the largest smart pole market share?

Who are the key players in the smart pole market?

What are the factors driving the smart pole market growth?

b. Key factors that are driving the smart pole market growth include the need for energy-efficient pole lighting systems and the increasing government initiatives for smart cities.