The global smart port market size was valued at USD 1.69 billion in 2019 and is expected to grow at a compound annual growth rate (CAGR) of 32.4% from 2020 to 2027. The growing need to curb operational expenses, gather real-time information, and make data-driven decisions at port facilities is collectively driving the adoption of smart technologies among harbor authorities. Several technologies including Artificial Intelligence (AI), Internet of Things (IoT), blockchain, and process automation are used for transforming a traditional port into a smart port. These technologies are either deployed separately or in combination to transform the conventional infrastructure into a digitalized one. The smart port offers several benefits over traditional port including reduced human-related disruptions, limited operational expenses, intelligent decision making, and more predictable performance. All these benefits offered results in increased productivity thereby paving the way for a sighted vision of Port 4.0. 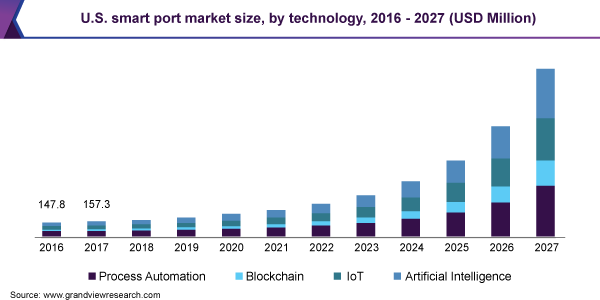 Besides these benefits, growing technological innovation and resulting ease in technology integration are increasing the uptake of smart technologies across all types of ports. National and international trade through maritime transport has significantly increased over the years. Benefits such as lower transportation costs have resulted in the growing preference for marine transport. The rise in global trade activities worldwide has increased the burden on shipyards and decks. An increase in the number of operations has forced the harbor authorities to embrace smart technologies and solutions for automating several harbor operations.

The outbreak of the COVID-19 pandemic and resulting lockdowns imposed to contain the spread of the virus has put a heavy burden on the industries that are highly dependent on the workforce for conducting operations, and the marine industry is no exception. The unavailability of the workforce at full potential has necessitated harbor authorities to embrace automation. The pandemic, therefore, is envisaged as a catalyst in the development of smart ports.

The process automation segment accounted for more than 34% of the global revenue share in 2019. The segment is also forecasted to register a substantial CAGR during the forecast period. The deployment of could-based software to assist the automation process is gaining traction across ports. To limit human intervention and thereby focus on critical operational tasks, port authorities are increasingly deploying software-assisted robots for redundant tasks including ship invoicing and port gate operations. The degree of automation depends on the task/operation under consideration, which may sometimes involve the integration of multiple technologies with process automation software. However, process automation, as a separate standalone technology itself offers immense growth opportunities for dock operators.

The technology segment also includes other technologies such as blockchain, IoT, and AI. The Port generates a humongous amount of quantitative data and paperwork related to docking operations. The implementation of technology will not only simplify dock operations but also save costs in a longer run. For instance, using smart sensors, harbor authorities can assess the performance of each asset in real-time, undertake preventive maintenance measures whenever required, and thereby reduce the operating costs.

The extensively busy segment accounted for the largest share in the smart port market with more than 49% revenue share in 2019. Ports that have a throughput capacity of over 18 million TEU are included in this segment. The primary reason for the soaring share of extensively busy ports is their capacity and the number of operations processed, which has been compelling authorities to implement some level of automation for attaining operational efficiency. Further, these ports generate substantially high revenues, enabling them to easily invest in automation.

The other segments include moderately busy and scarcely busy ports. The ports that involve a throughput capacity of 5 to 18 million Twenty-foot Equivalent Unit (TEU) are classified under moderately busy and those that involve below 5 million TEU capacity; are classified under scarcely busy port segment. The moderately busy segment is anticipated to witness the highest adoption over the forecast period. The considerable investment capacity coupled with a lesser number of operations and therefore less complexity involved in technology integration is expected to propel the segment growth.

The seaport segment dominated the market and accounted for over 66.5% revenue share in 2019. The degree of automation at ports differs from port to port depending upon various factors that include an average number of operations, capacity, and size. Also, port automation involves a considerable amount of capital investment, which is a key determinant for technological adoption and implementation. Seaports handle a huge amount of small to large cargo as well as passenger traffic. Therefore, these ports entail high requirements of smart technologies for efficient dock operations. 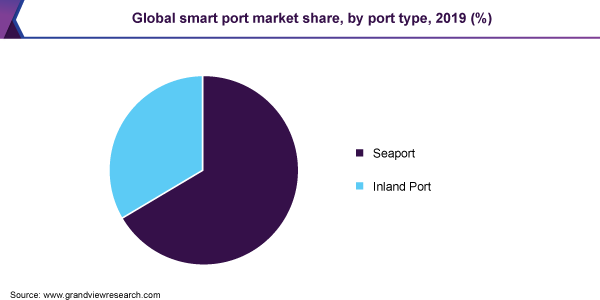 On the other hand, the inland port segment is anticipated to witness considerable growth over the forecast period. Inland ports are situated in the inland waterways such as rivers, streams, and are smaller in size as compared to seaports. However, with the rise in maritime transport, several inland ports, especially in Europe handle a noticeably large amount of container traffic, leading to increased operations and opportunity for automation. As such, the segment is anticipated to witness reasonable growth in the forthcoming years.

Asia Pacific dominated the market and accounted for more than 37% of the global revenue share in 2019. The region is characterized by the presence of major ports with high throughput capacity, thereby contributing to the largest share worldwide. Countries such as China, Japan, South Korea, and Singapore are the major countries recognized as prime trading points involving large amounts of trade activities. The aforementioned factors coupled with the availability of technologies at a relatively lower cost, especially from countries including Taiwan and China has ensured strong growth in the region.

Europe is anticipated to witness the highest CAGR during the forecast period. Ports in Europe are comparatively smaller; however, handle a large amount of cargo. Also, the European ports are no longer capable of competing on port size alone as ports with comparatively less size/ capacity handle as much traffic as large-sized ports. Therefore, even moderately and scarcely busy ports are increasingly shifting towards smart operations. For instance, in Germany, the Port of Rotterdam has partnered with IBM to implement smart sensors across the 42-kilometer-long stretch of the port.

The market is moderately fragmented with the presence of several market players. In a bid to gain early movers’ advantage and strengthen their position in the market, market players are embracing various strategies, including product development, strategic collaborations, and mergers and acquisitions among others. For instance, in March 2019, Port of Rotterdam announced the launch of the OnTrack application which provides real-time insights on the flow and handling of the rail freight at terminals.

The introduction highlighted the company’s strategy to expand its digital offerings designed for streamlining dock processes. Moreover, the market players are also engaging in strategic collaborations for deploying the latest technologies at the ports. For instance, in May 2019, Abu Dhabi Ports announced that it has signed a partnership agreement with Dell Technologies.  The partnership was aimed at combining the expertise of both firms to integrate state-of-the-art technologies into maritime operations and solutions. Some of the prominent players in the smart port market include:

This report forecasts revenue growth at global, regional, and country levels and provides an analysis of the latest industry trends and opportunities in each of the sub-segments from 2016 to 2027. Grand View Research has segmented the global smart port market report on the basis of technology, throughput capacity, port type, and region:

How big is the smart port market?

What is the smart port market growth?

Which segment accounted for the largest smart port market share?

b. Asia Pacific dominated the smart port market with a share of 37.8% in 2019. This is attributable to the presence of major ports with high throughput capacity in the region.

Who are the key players in the smart port market?

b. Some key players operating in the smart port market include Royal HaskoningDHV, Port Of Rotterdam, Abu Dhabi Ports, ABB, and Accenture, among others.

What are the factors driving the smart port market?

b. Key factors that are driving the smart port market growth include the growing need to curb operational expenses, gather real-time information, and make data-driven decisions at port facilities.