The global smart speakers market size was valued at USD 2.2 billion in 2017 and is expected to exhibit a CAGR of 38.7% over the forecast period. Increasing the adoption of smart home technology and the presence of smart home devices is enabling people to shift preferences toward smart speakers. The capability of these products to operate using voice commands is driving their adoption. The idea of controlling the entire home from any corner of the house only by using voice commands is attracting consumers toward these products, subsequently driving the market. 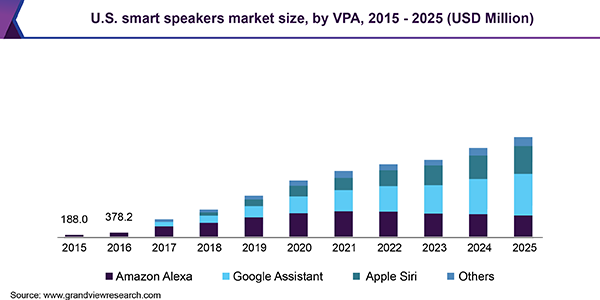 Voice assistants such as Alexa and Google Home are witnessing popularity among consumers. Alexa held the largest market share in 2017, followed by Google. The first-mover strategy was effectively utilized by Amazon to establish a dominant position in the U.S. market since its inception in 2014. Furthermore, Google introduced its smart speaker, Google Home, primarily in Asian countries such as India and Japan, and is expected to witness significant growth over the forecast period.

Consumers tend to prefer cost-efficient products that offer multiple advanced features. Amazon Alexa gained massive traction among consumers due to its promotional techniques at a Whole Foods store and Alexa-centric advertisements on both online and television commercials. Additionally, Amazon reduced its product pricing to gain a competitive edge in the market.

Automation of domestic tasks and increasing demand for human-to-machine interaction is anticipated to boost the growth of the market over the forecast years. According to the U.S. household data, as of March 2018, more than 40% of consumers in the U.S. used smart speakers in their everyday lives and this usage is expected to gain traction over the forecast period. This is due to the multi-purpose usability of these speakers and also because they can be used to listen to music, receive sports and entertainment updates, and control smart home devices, among others.

In September 2017, various in-house interviews conducted by NBC News stated that smart speaker owners prefer spending their leisure time using speakers than watching television or listening to the radio. Thus, such acceptance and adoption are expected to continue propelling the market.

Amazon Alexa accounted for the dominant share in the global smart speakers market in 2017. Its adoption is rapidly increasing among U.S. consumers due to its first-mover advantage. This adoption is expected to increase over the next few years owing to Alexa’s multiple smart home integrations and Amazon’s strategy to offer its voice assistant to various emerging players in the market. For instance, in 2016, Linkplay Technologies, Inc. collaborated with Amazon to integrate Alexa in its smart speakers for establishing its foothold in the market.

Google's assistant is anticipated to exhibit significant growth over the forecast period to emerge as the leading VPA segment by 2025. The use of Google Home voice assistant in the Asia Pacific is expected to witness a rapid increase, with Google launching its products in Asian countries such as India and Japan. Currently, the China market is marked by the presence of other pioneers such as Alibaba, Xiaomi, and JD.com. 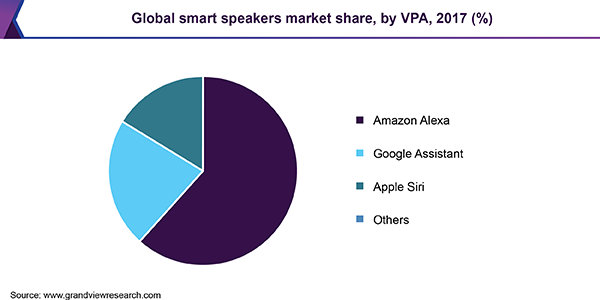 North America dominated the global market in 2017 owing to the growing demand for Internet-of-Things (IoT)-enabled services and wireless devices. Increasing consumer inclination toward convenience goods in North America has fueled the region’s growth.

This region is also one of the early adopters of this technology. The willingness of consumers to use and accept new technologies has encouraged manufacturers to develop advanced and new products thus far. The North American market is, however, expected to be surpassed by the Asia Pacific by 2025. Emerging as the largest and most lucrative market, Asia Pacific is poised to register a CAGR of over 55.0% during the forecast period.

Amazon Alexa held a significant share in the European market in 2017 owing to its massive popularity in Germany and U.K. Google Home followed suit, which is expected to dominate the European market over the forecast period owing to its popularity in France, Italy, Spain, and other European countries. As of June 2018, Google Home operates in close to 13 European countries and Amazon Alexa in 11.

Key players in the market include Amazon, Google, Apple, and Xiaomi. These key players are focused on upgrading existing versions of their products, investing in technological advancements, and entering into collaborations to establish their market presence.

In 2018, Amazon launched its Alexa Voice-enabled Service (AVS) in Japan. The service enabled various other device manufacturers to access AVS and launch their Alexa-enabled products in Japan. Additionally, through this strategy, Amazon has been able to maintain its foothold in the Japanese market.

In May 2017, Conexant Systems, Inc., a company engaged in providing multimedia products, announced its collaboration with Amazon, Inc. The company announced the introduction of an upgrade to its existing AudioSmart Development Kit for Alexa Voice Services (AVS). The upgraded version of the product is known as AudioSmart 4-mic Development Kit. The company introduced the kit to assist various third-party manufacturers in integrating Alexa voice assistant in their smart speakers.

This report forecasts revenue growth at global, regional, and country levels and analyzes the latest industry trends in each of the sub-segments from 2015 to 2025. For this study, Grand View Research has segmented the global smart speakers market report based on VPA and region: